Home News US Capitol breach: A look at how world leaders, US allies reacted to siege by Trump supporters in Washington – World News , Firstpost

US Capitol breach: A look at how world leaders, US allies reacted to siege by Trump supporters in Washington – World News , Firstpost 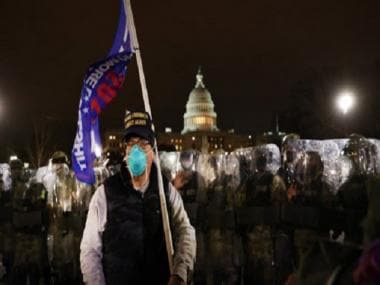 Leaders around the world condemned the storming of the US Capitol by supporters of President Donald Trump on Wednesday, calling it a shocking development in one of the world’s largest democracies.

British prime minister Boris Johnson on Twitter condemned the “disgraceful scenes in US Congress,” adding, “The United States stands for democracy around the world and it is now vital that there should be a peaceful and orderly transfer of power”.

British foreign secretary Dominic Raab also tweeted: “The US rightly takes great pride in its democracy, and there can be no justification for these violent attempts to frustrate the lawful and proper transition of power.”

Disgraceful scenes in U.S. Congress. The United States stands for democracy around the world and it is now vital that there should be a peaceful and orderly transfer of power.

President-elect Joe Biden called Wednesday for the restoration of “just simple decency” as a mob incited by his predecessor stormed the US Capitol and delayed Congress from certifying the results of November’s presidential election.

“To storm the Capitol, to smash windows, to occupy offices, and to threaten the safety of duly elected officials is not protest. It is insurrection. The world is watching — and like so many other Americans, I am shocked and saddened that our nation, so long a beacon of light, hope and democracy, has come to such a dark moment.”

“History will rightly remember today’s violence at the Capitol, incited by a sitting president who has continued to baselessly lie about the outcome of a lawful election, as a moment of great dishonor and shame for our nation. But we’d be kidding ourselves if we treated it as a total surprise,” Obama said of the chaos that engulfed the nation’s capital on Wednesday.

Former president George W Bush released a public statement Wednesday to strongly condemn the siege of the US Capitol and urged the supporters of Trump to stand down, writing that “our country is more important than the politics of the moment.”

“Laura and I are watching the scenes of mayhem unfolding at the seat of our Nation’s government in disbelief and dismay. It is a sickening and heartbreaking sight. This is how election results are disputed in a banana republic – not our democratic republic. I am appalled by the reckless behavior of some political leaders since the election and by the lack of respect shown today for our institutions, our traditions, and our law enforcement. The violent assault on the Capitol – and disruption of a Constitutionally-mandated meeting of Congress – was undertaken by people whose passions have been inflamed by falsehoods and false hopes,” said Bush.

Clinton, a Democrat, echoed that message later Wednesday, calling the scene “an unprecedented assault on our Capitol, our Constitution, and our country.”

“The assault was fueled by more than four years of poison politics spreading deliberate misinformation, sowing distrust in our system, and pitting Americans against one another. The match was lit by Donald Trump and his most ardent enablers, including many in Congress, to overturn the results of an election he lost,” Clinton charged.

Carter, also a Democrat, said he and former first lady Rosalynn Carter were “troubled” by the day’s events.
“This is a national tragedy and is not who we are as a nation,” he said.

The EU’s foreign policy chief condemned an “assault on US democracy”.

“In the eyes of the world, American democracy tonight appears under siege,” Josep Borrell tweeted.

Calling the action an “assault on US democracy, its institutions and the rule of law”, he added: “This is not America. The election results of 3 November must be fully respected.”

Other allies were similarly appalled at what they described as an attack on American democracy, though some said they believed US democratic institutions would withstand the turmoil. Some leaders singled out Trump for harsh criticism.

“Trump and his supporters should finally accept the decision of the American voters and stop trampling on democracy,” German Foreign Minister Heiko Maas wrote on Twitter.

“The enemies of democracy will be happy to see these incredible pictures from DC,” said Mass comparing the scene to the storming of the Reichstag — the 1933 event that paved the way for Hitler’s rise in Germany.

Canadian prime minister Justin Trudeau, who has clashed with Trump in the past, said he was “deeply disturbed and saddened” by Wednesday’s attacks. Trudeau declared that “violence will never succeed in overruling the will of the people” while affirming his faith that US democracy would be upheld.

Canadians are deeply disturbed and saddened by the attack on democracy in the United States, our closest ally and neighbour. Violence will never succeed in overruling the will of the people. Democracy in the US must be upheld – and it will be.

“The violence against American institutions are a serious attack on democracy,” Le Drian tweeted. “The will and the votes of the American people must be respected.”

Australian prime minister Scott Morrison condemned the “very distressing scenes” in the US.

“We condemn these acts of violence and look forward to a peaceful transfer of Government to the newly elected administration in the great American democratic tradition,” he tweeted.

Very distressing scenes at the US Congress. We condemn these acts of violence and look forward to a peaceful transfer of Government to the newly elected administration in the great American democratic tradition.

Jacinda Ardern tweeted: “Democracy – the right of people to exercise a vote, have their voice heard and then have that decision upheld peacefully should never be undone by a mob.”

The prime minister added her country’s thoughts were with everyone “devastated” by today’s events, adding: “what is happening is wrong.”

“Democratic process cannot be allowed to be subverted through unlawful protests,” said Prime Minister Narendra Modi as he expressed shock at the storming of the US Capitol in Washington by supporters of President Donald Trump.

“Orderly and peaceful transfer of power must continue,” Modi said.

Distressed to see news about rioting and violence in Washington DC. Orderly and peaceful transfer of power must continue. The democratic process cannot be allowed to be subverted through unlawful protests.

“Shocking scenes in Washington, DC,” NATO chief Jens Stoltenberg tweeted. “The outcome of this democratic election must be respected.”

Dutch prime minister Mark Rutte issued a direct appeal to Trump to “recognize Joe Biden as the next president today.”

Spanish prime minister Pedro Sánchez said: “I have trust in the strength of US democracy. The new presidency of Joe Biden will overcome this tense stage, uniting the American people.”

Irish premier Micheal Martin, who has invited the Irish-American Biden to visit his ancestral homeland early in his presidency, tweeted his condemnation.

“The Irish people have a deep connection with the United States of America, built up over many generations. I know that many, like me, will be watching the scenes unfolding in Washington, DC with great concern and dismay,” Martin said.

“Extremely troubled by the violence and horrible events taking place in Washington DC American democracy is resilient, deeply rooted and will overcome this crisis,” Greek prime minister Kyriakos Mitsotakis said in a tweet.

Turkey, a NATO ally that has sometimes been at odds with Washington, expressed concern over the images of angry Trump supporters trying to thwart the certification of Biden as the new president.

“We are following with concern the internal developments happening in the US,” the Turkish foreign ministry said in a statement.

“We call on all parties in the US to maintain restrain and prudence. We believe the US will overcome this internal political crisis in a mature manner.”