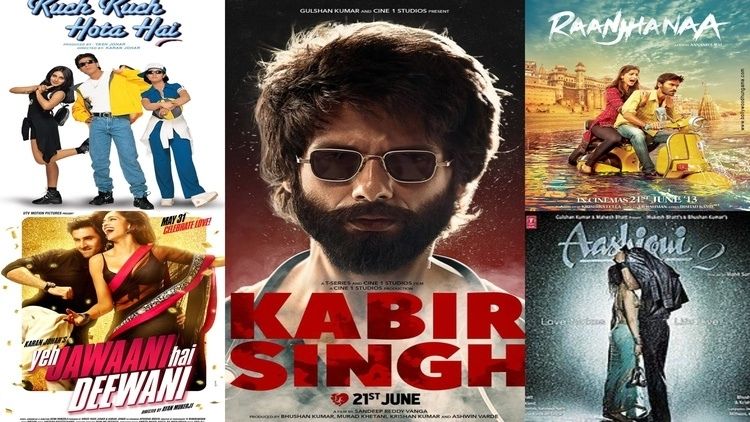 The movie protagonist Kabir was a toxic person and treated Preeti as if he owns her and can toy with her whenever he wants. It seemed as if she is his property and he even declared it publicly at the very first meeting that she belonged to him.

If Preeti would not have been the way she was and straight away rejected him or would have refused to keep up with his unacceptable treatment. Kabir might have gone far more lengths to hurt her. A straight up example of Bollywood toxic relationships.

This movie marked an epitome of love story but hardly did anyone notice the toxicity here. It is considered so good that there was an entire remake of this movie, ‘The Star is Born’ in English.

The protagonist Rahul puts in no efforts in the relationship and claims to love Aarohi to the extent of his life. Aarohi keeps up with Rahul even after he emotionally and physically abuses her. No matter how much Aarohi loved Rahul, her love couldn’t make him do the right things. She even goes to the extreme extents of naivety and claims there must be a world where their roles are swapped. And he must be still by her side so it is her duty to stay with him even after multiple failed attempts to make him a better person.

The entire relationship of the two was due to Aarohi’s efforts while Rahul put in absolutely no work into the relationship.

This is one movie where everyone is to blame. While the villain of the movie is Zoya, we cannot ignore Kundan’s toxicity here.

Thanks to Kundan’s jealousy, he stalked Zoya for years even after getting rejected multiple times and getting slapped but did not show any signs of giving up. Now, that might sound very romantic but it isn’t. That is harassment. He refuses to take her firm ‘No’ for an answer.

On other side Zoya kept using Kundan for her own good and she did it to such an extent that he died at the end of the movie. All because of her foolish revenge. No doubt, a great example of Bollywood toxic relationships.

Losing one’s identity or changing oneself to be liked by your partner. Classic toxicity.

They make it clear in the movie that Anjali isn’t like ‘other girls’ because she doesn’t wear makeup or high heels. This reinstates the sexist notion that women dress up for men or to make up for their lack of intellect. For Rahul to fall in love with Anjali, all it took was girly clothes, makeup and a bit of shy attitude.

Why does a woman need to change herself in order to get male attention? Well, we could leave that question for the writers of the movie, but this movie has toxic written on Rahul. This is why this movie is an example of Bollywood toxic relationships.

This movie is a classic example of how the guy decides to love the girl. Then expects her to forget about her career and all the success she has earned till date. Do exactly what he says and go exactly where he goes.

Bunny loved travelling and was pursuing a career where he had to travel a lot and had no fixed place to stay. He falls in love with Naina, a doctor who has her own clinic and is quite successful in her life. Bunny disappears for years altogether and suddenly comes back one day and realises he’s as much as in love with her as she used to be with him.

By the end of the movie he confesses his love to Naina and tells her that he would rather travel with her from now. All because he now has feelings for her. To which Naina clearly specifies there she would not be able to leave her clinic and her family.

They do end up together by the end of the movie hinting that he respects Naina’s decision. But the end happened to be rather vague.