A Conversation With Joe Biden 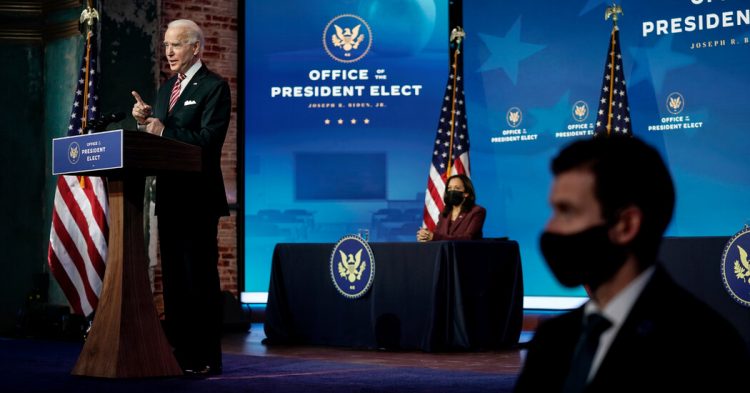 Good morning. Joe Biden talks about his plans on Covid and more.

I had asked how he would try to persuade Americans to make one final push to change their behavior in early 2021 and reduce the virus’s spread. Doing so could save tens of thousands of lives.

His answer was full of details that make it clear he is listening to public health experts. He will ask Americans to wear masks and will require them where he can, he said. He will ask governors to take similar steps and to wear masks themselves as role models.

The current rate of infection is “staggering,” Biden said. “It’s going to be incredibly high — the damage and the death toll.”

But I think his answer was also missing something important — something that will go a long way toward determining how successful he is in reducing Covid deaths. It was missing an emotional component.

In Biden’s view, Americans already understand the need to bring down the infection rate in the months ahead, while the vaccine is being rolled out. “There’s a new sense of urgency on the part of the public at large,” he said to me and the handful of other journalists on the call. “The American public is being made painfully aware of the extent and damage and incredibly high cost of failing to take the kind of measures we’ve been talking about.”

That seems a bit optimistic. The number of new daily cases has risen more than fivefold since Labor Day largely because Americans are tired of staying at home and of all the other disruptions to normal life — and understandably so. It’s pretty miserable.

Yet it is also clear that our impatience is killing people. Almost 20,000 Americans died of confirmed Covid cases in the past week, and next week’s toll will probably be worse.

The start of Biden’s presidency will give him an opportunity to deliver not just a scientific message but also an emotional one. He can make it clear that he understands people’s frustration — but that they need to redouble their efforts for a few more months, for the sake of themselves, their families and their communities.

He has made some steps in this direction, like his plan to ask Americans to wear masks for his first 100 days in office. He added an intriguing idea on yesterday’s call: He said that his administration would do more to publicize research about the social situations in which the virus spreads — which in turn could make people feel more comfortable socializing in ways that don’t seem to spread the virus. Effective public health messaging isn’t only about telling people what not to do, as Julia Marcus of Harvard Medical School has emphasized.

One of Biden’s greatest strengths is his ability to look on the positive side. It has allowed him to overcome personal tragedy and helped him win the presidency. But optimism alone doesn’t quite capture the situation with the virus. On the current path, many Americans will needlessly die in the first months of Biden’s presidency.

What Biden said on other topics:

Uplift: With all of his foreign assignments canceled this year, a Swedish photographer refocused his lens on his home. The results are a wintry wonderland.

From Opinion: Religious services aren’t the same over Zoom. “We stay because attendance is not about what the church gives us; it is our way of offering something to God,” writes Esau McCaulley of Wheaton College.

Lives Lived: The detachment and relative maturity of the British model Stella Tennant — who was an inspiration to designers like Karl Lagerfeld and Gianni Versace — served her well in a business notorious for flightiness. She died at 50.

Rebecca Luker’s three decades on Broadway brought her three Tony Award nominations. But she did not identify as a show-tunes type. “I love rock music and jazz,” she said. “I love the ’70s stuff I grew up with.” She died at 59.

By the late 1950s, Billy Strayhorn — the songwriter and Duke Ellington collaborator — was growing tired of rearranging classic swing tunes for Ellington’s band. So Strayhorn set himself a much more audacious challenge: Reimagine Tchaikovsky’s “Nutcracker” suite for big-band jazz.

Together, Strayhorn and Ellington spent months working on the project, both in person and on the phone. When Strayhorn was by himself, he would hum, whistle and even dance while writing the music, David Hajdu explains in “Lush Life,” his biography of Strayhorn.

One of my favorite December traditions is to listen to a live performance of the piece. Unfortunately, that’s not possible this year. But there is an alternative: a new live recording of Ellington’s and Strayhorn’s “Nutcracker” by the Eric Felten Orchestra, available on Spotify, Apple Music, or CD. Give it a try.

“Here’s hoping that come next year there will be a grand restoration of activities that we all do together,” Felten told me. Until then, we can still enjoy some great music.

This spicy white bean stew is very flexible — mix in whatever you’ve got in the fridge.

Essay collections from Joan Didion and George Saunders are among The Times’s list of 13 books to watch for in January.

George Clooney talks about his new Netflix movie and why he doesn’t think theaters will be going away anytime soon.