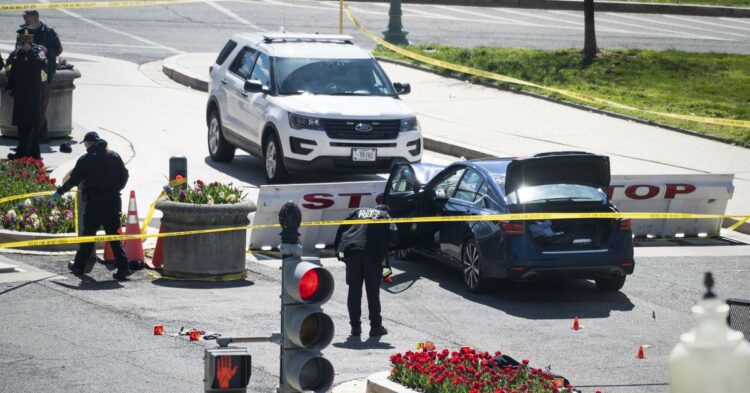 After the deadly January 6 insurrection, the US Capitol became a fortress. On Friday, when some, but not all, of those security procedures were still in place, a knife-wielding assailant allegedly rammed into Capitol police officers with his car. The incident reinvigorates questions about how to protect the Capitol, and whether some enhanced security measures should become permanent.

Officer William Evans was pronounced dead from his injuries, according to a statement from Capitol Police. Evans was an 18-year veteran of the police force.

“It is with a very, very heavy heart that I announce one of our officers has succumbed to his injuries,” Capitol Police Chief Yogananda Pittman said Friday, adding that a second officer was injured. Pittman told reporters that after the unnamed man rammed two officers with his car and smashed the car into a security barrier, he exited the car brandishing a knife. The suspect has not yet been identified by police.

Though the Capitol was mostly empty with Congress on recess, Friday’s incident will inevitably prompt questions about whether the remaining enhanced security put in place after January 6 was enough.

In the immediate aftermath of the insurrection, new security measures were put in place:

Some of those remain in place, but other measures have been modified. For instance:

Rare incidents like this have happened before, and each was contained even while extreme security measures weren’t in place. In 2006, a suspect crashed a car into a barrier near the Supreme Court and got into the Capitol building before being detained.

But Friday’s incident showed that the Capitol complex, the lawmakers inside, and the officers guarding it all still face serious threats. Now, likely, comes a big debate about how closed off the seat of American democracy really needs to be.

Enhanced security around the Capitol could become permanent

In early March, a Capitol security review found that the complex was extremely vulnerable, partly because the building’s police unit was “understaffed, insufficiently equipped, and inadequately trained.” The study, led by retired Army Lt. Gen. Russel Honoré, called for, among other things, the establishment of a “quick reaction force,” more Capitol Police officers, and better intelligence sharing.

Those suggestions were at the time well received by lawmakers, including some progressives who might be expected to question increased security funding.

Honoré’s report also called for a retractable fence that was “easily erected and deconstructed.”

Rep. Tim Ryan (D-OH), who is helping to lead Congress’s security response, told reporters on Friday a retractable fence and other measures will be considered. “We’ll be reviewing everything, at this point, including the fencing,” but he noted “it’s very, very early.”

“We can’t get too far ahead of ourselves without knowing that we have the ability to protect the Capitol, to harden the Capitol,” he continued.

A Democratic lawmaker, who asked not to be identified, said that there were serious discussions underway about having a permanent fence around the Capitol, but that it would be of the retractable kind proposed in Honoré’s report. The member of Congress noted that the fencing would go up when there were intelligence reports of an imminent threat.

But fencing may be where the majority of the debate about future security for the Capitol building lies.

In the weeks after the fencing went up, Republican and Democratic lawmakers opposed the fencing and the wide perimeter it established around the Capitol grounds, much of which is typically open for public visits.

Lawmakers felt so strongly on the issue that several sponsored legislation to bar any fencing from becoming permanent. In March, Sen. Roy Blunt (R-MO), Sen. Chris Van Hollen (D-MD), and Del. Eleanor Holmes Norton (D-DC) introduced a measure to prevent federal funding from being used for a permanent barrier.

“Permanent fencing would send an un-American message to the nation and the world, by transforming our democracy from one that is accessible and of the people to one that is exclusive and fearful of its own citizens,” Norton said at the time.

Other members of Congress, meanwhile, are already upset the outer perimeter isn’t there anymore.

“I was not a fan of taking down the metal fencing as soon as we did,” Rep. Anthony Brown (D-MD) told Vox in an interview Friday. When asked why, he responded, “So cars can’t run over Capitol police officers.”

Multiple congressional staffers Vox spoke to said they didn’t want to see an enhanced security presence around the Capitol well into the future — “God, I hope not,” exclaimed one aide.

“We all hated the fence, that hasn’t changed, but there was a true fear today,” added another staffer. “It strikes me as super unlikely it comes down this calendar year now.”

“I think the current security posture is plenty. The Capitol is not and should not be a fortress,” a third echoed, adding that the reforms they’d like implemented are better training and, potentially, more officers.

Another noted that there’s a long history of assailants ramming their cars into Capitol barriers. What this staffer would rather see is better protection for the Capitol Police, like ensuring they remain behind barriers until a vehicle stops completely. Still, the aide admitted, what to do next “is a tough question.”

After Friday, that’s a question that still needs an answer.

A deadly day at the Capitol again raises questions about security