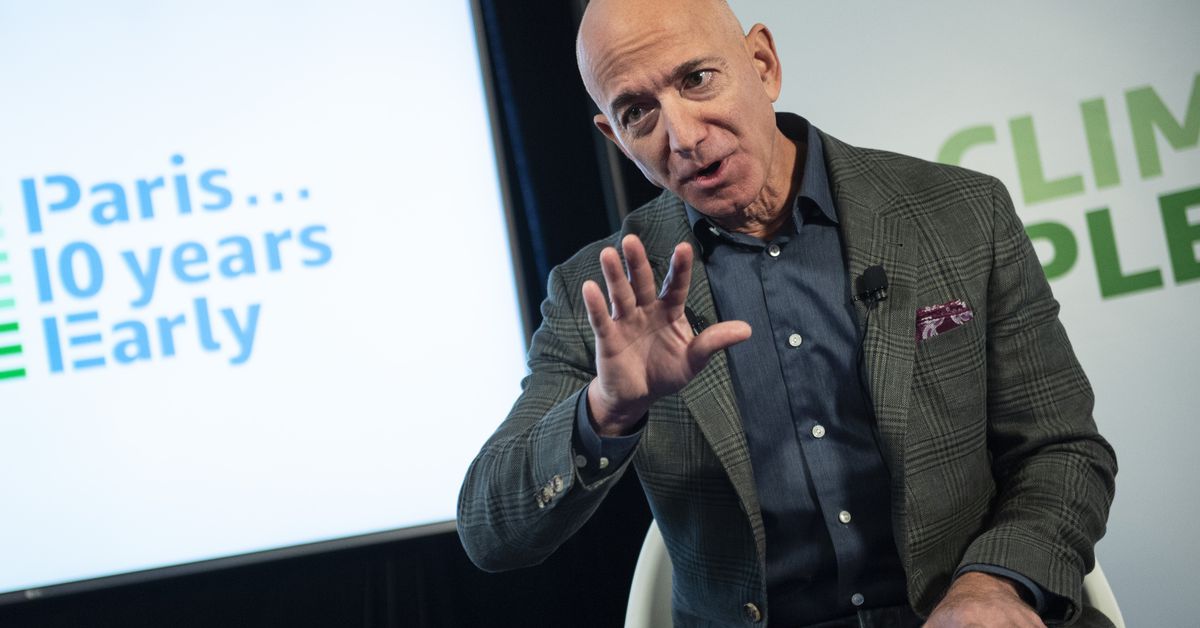 Once he steps down as CEO of Amazon later this year, Jeff Bezos will have more time to focus on his “passions,” including his $10 billion Earth Fund aimed at addressing climate change. That’s a huge sum that could have an outsized impact on climate action, but vulnerable communities — including those affected by Amazon’s warehouses — say they’ve been excluded.

So far, Bezos has only allocated $791 million — just under 8 percent of the total fund — to 16 environmental organizations. That injection of cash is still enormous. His grants, announced in November, have already fattened the budgets of some mainstream advocacy groups, such as the Environmental Defense Fund. The majority of his grants went to larger organizations with less diverse leadership. Smaller, grassroots groups representing communities of color say they’ve been left out. They’re asking for recognition and funding. And they want Bezos to do more for communities living with pollution from Amazon’s warehouses.

“Chump change compared to the wealth that he has accumulated off the backs of our people.”

In February 2020, Bezos pledged to give some of his personal fortune to “scientists, activists, [and] NGOs” tackling climate change. Since the pandemic erupted in March, Bezos’ personal wealth has ballooned by more than $75 billion. While many other businesses shut down during stay-at-home orders, Amazon’s business boomed because more people shopped online. Amazon’s greenhouse gas emissions have continued to grow, too, despite Bezos’ “passion” for climate action and 2019 commitment from his company to reign in its climate pollution.

“I’m actually really frustrated with this. He has an opportunity to do so much with the funds that he has provided out there, although I would still consider it chump change compared to the wealth that he has accumulated off the backs of our people,” says Gabriela Mendez, a community organizer with the nonprofit Center for Community Action and Environmental Justice (CCAEJ). CCAEJ has fought to clean up the air in California’s Inland Empire, a region with some of the worst smog in the nation. It’s a community increasingly dominated by warehouses for e-commerce, and a lot of pollution comes from vehicles moving goods to and from those facilities. Amazon happens to be the biggest private employer in the region, so CCAEJ and other local groups have pushed the company to guarantee stronger worker protections and to switch to zero-emissions electric trucks.

Mendez says there’s been an onslaught of truck traffic through her neighborhood since an Amazon warehouse opened up nearby. “He really needs to take a look at this and prioritize these communities,” she says.

The five established “big green” groups that benefited the most from Bezos’ Earth Fund were each allotted $100 million in November, or nearly two-thirds of Bezos’ first round of funding. They are the Environmental Defense Fund, The Nature Conservancy, World Wildlife Fund, World Resources Institute, and the Natural Resources Defense Council. These organizations have traditionally held more sway in politics; for instance, the Natural Resources Defense Council’s former executive director, Gina McCarthy, is now Joe Biden’s domestic climate czar. They are also groups that have historically worked more closely with corporations on sustainability initiatives, such as the Environmental Defense Fund (EDF).

The EDF tells The Verge it has already received its $100 million grant. That’s equal to about half of its typical operating budget for a year, although it plans to spend the money over three years. The majority of the spending will go toward launching a satellite in 2022 to monitor methane emissions, a super greenhouse gas, and building a platform to make that data publicly available. (When asked if Bezos’ Blue Origin would play a role, EDF said it had previously signed a contract with SpaceX to launch the satellite prior to receiving an Earth Fund grant).

A smaller portion of EDF’s grant will go toward efforts to vet so-called “nature-based solutions.” These are popular with companies who want to offset their pollution by investing in things like forest conservation. Many of these projects don’t permanently trap greenhouse gasses, investigations into these carbon offset schemes have found. One, a Bloomberg investigation, was even focused on one of Bezos’ grantees, the Nature Conservancy. Nevertheless, companies buy into them and claim that they’re canceling out their carbon footprint. EDF says that’s why funding their effort to vet these projects is important.

Several other grantees plan to focus their work on similar “nature-based solutions.” Separately, Amazon and other tech companies have funneled money into still-unproven technologies that remove planet-heating carbon dioxide from the atmosphere. Microsoft pledged $1 billion and Stripe committed $1 million a year to develop the technology. Until that technology is deployed at scale — and there are still questions over whether it’s too costly and energy intensive to do so — we won’t know whether those investments will succeed in permanently trapping and storing the carbon dioxide. In the meantime, the planet is continuing to heat up.

“It reinforces practices that caused the crisis in the first place”

Groups like the Climate Justice Alliance, a cohort of organizations focused on tackling environmental racism, see these market-based solutions as a cop-out for corporate polluters. By funding these sorts of things, companies can say they’re tackling climate change. But if they aren’t weaning themselves off fossil fuels at the same time, they’re still contributing to the crisis and potentially delaying the transition to cleaner energy. “It reinforces practices that caused the crisis in the first place, perpetuating sacrifice zones and doing nothing to reduce emissions at the source,” CJA said in an email.

That’s why CJA wants to see more funding in the hands of grassroots groups that push companies to stop burning fossil fuels in the first place. They also want to stop pollution at the source because greenhouse gas emissions are usually accompanied by soot or other toxins. Capturing greenhouse gases alone doesn’t absolve companies like Amazon from the health threats posed by those other pollutants.

“No amount of greenwashing will absolve Jeff Bezos or Amazon of the harm they have inflicted on frontline communities and workers, or our planet,” CJA said. “If the Earth Fund wants to purport to save the planet, they should send funds directly to grassroots communities who are the least responsible and hardest hit by climate disaster and the kinds of rapacious business practices Bezos engages in.”

There’s another problem — people of color are more likely than white people to live in polluted areas. Both ClimateWorks and Union of Concerned Scientists have also faced criticism for lacking diversity, because the people who are most affected by pollution aren’t getting a seat at the table. Both groups have made commitments to include environmental and racial justice in their work.

“We know we can always do more to include the voices of groups working on the frontlines,” said Shawn Reifsteck, a vice president at ClimateWorks, in an email.

In December, the Climate Justice Alliance asked groups that received funding from Bezos to redirect 10 to 25 percent of those monies to a pooled fund. The fund would be governed by grassroots organizers from communities most impacted by pollution and climate change. CJA says “several” grantees have agreed to consider it. ClimateWorks says they’re in communication with CJA. But others might have their hands tied. EDF says that the funds it received from Bezos are restricted to its two projects on methane and nature-based solutions.

“The reason that we ended up with those two projects is that Jeff [Bezos], when he first called us to talk about what he was up to, we talked about a range of things that are important — and these were a couple of the ideas that he had an interest in,” says EDF president Fred Krupp.

Bezos’ money has an outsized effect

Because less than 2 percent of global philanthropy goes toward solving the climate crisis, Bezos’ money has an outsized effect. Very little of the existing philanthropy addresses environmental and racial inequities, according to ClimateWorks. So far, Bezos’ donations continue that practice.

“By every measure, the Bezos Earth Fund’s $10 billion commitment is game-changing,” says ClimateWorks’ Reifsteck. Bezos hasn’t said how long it will take him to distribute the entire $10 billion. Still, that sum is ten times as much as foundations typically give in one year. And Bezos’ first round of funding did include some smaller grants to scrappier groups. That includes the NDN Collective, founded by a diverse group of Native American activists in 2018 to support indigenous-led campaigns and sustainability initiatives, and the Hive Fund for Climate and Gender Justice, launched in 2019 to raise money for women of color-led organizations.

“The first round of grants from The Bezos Earth Fund included a total of $151 million in funding to five organizations with deep roots and expertise in environmental justice,” a representative of the Bezos Earth Fund said in an email. “The groups are using this money to make their own grants to hundreds of smaller-scale organizations doing critical climate justice work in communities across the U.S., and to build and scale their own infrastructure and impact.”

Still, the Inland Empire, where Mendez lives, hasn’t seen anything “game-changing” since Bezos’ fund got off the ground. Instead, they’re grappling with more polluting infrastructure mushrooming across the region. For instance, Amazon plans to move into an air cargo logistics center. And even though their communities could use the funding, they worry about Bezos’ outsized influence. Will climate groups avoid pressuring Amazon in order to keep the Bezos donations coming?

“If these organizations are receiving those dollars from the Earth Fund, are there going to be strings attached?” says Faraz Rizvi, a special projects coordinator working alongside Mendez at CCAEJ. “Overall, I remain kind of pessimistic about these funds being able to continue to hold Amazon accountable.”