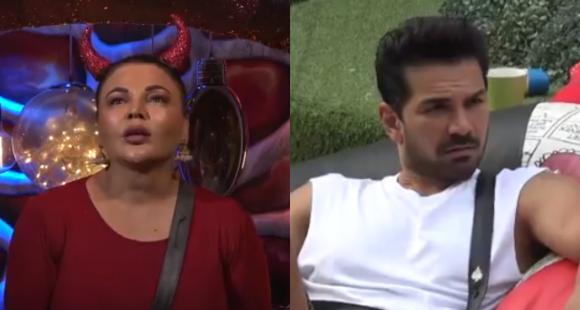 Rakhi Sawant, who is widely known for her controversies, revealed on the show that she has a mild crush on co-contestant Abhinav Shukla. The Bigg Boss 14 house is heating up ever since the entry of Rakhi Sawant and she is making sure her fans are entertained completely. The official Bigg Boss Twitter handle gave its fans and viewers a sneak peak of tonight”s (5 January) episode in which Rakhi Sawant can be seen opening up about her married life. The dance diva, who is reportedly married to UK-based businessman Ritesh, revealed that he hasn’t met her in almost 18 months.

Speaking to Abhinav Shukla, Rakhi can be heard saying, “He has not met me in 1.5 years. I called him three times to marry me but he didn’t come. I even applied mehendi 4 times but still he did not come. Now where will I even go to find companionship? I am alone, I need someone.” Rakhi also teared up.

Rakhi, who is widely known for her controversies, also later reveals in the show that she has a mild crush on Abhinav. “I wish that my husband comes out in front of everyone. Something happens to me when I see other people’s husband,” Rakhi can be heard saying.

Praising Abhinav, Rakhi even said that he has “hot body” and requested Bigg Boss to pair her up with him for any dance-realted acitivity. The dancing diva even goes on to ask Bigg Boss if it is a crime to love someone even though he’s with someone else. When Bigg Boss replies no, Rakhi can be seen blushing and says, “So should I say I love you to Abhinav?”

Do you like or love Rakhi’s presence in the house? Let us know in the comments below.