Home EntertainmentBollywood Bollywood In 2021: From 83, RRR To Sooryavanshi – 10 Films Which Will Surely Hit The Six & 10 Movies Which Could Surprise From Nowhere!

Bollywood In 2021: From 83, RRR To Sooryavanshi – 10 Films Which Will Surely Hit The Six & 10 Movies Which Could Surprise From Nowhere! 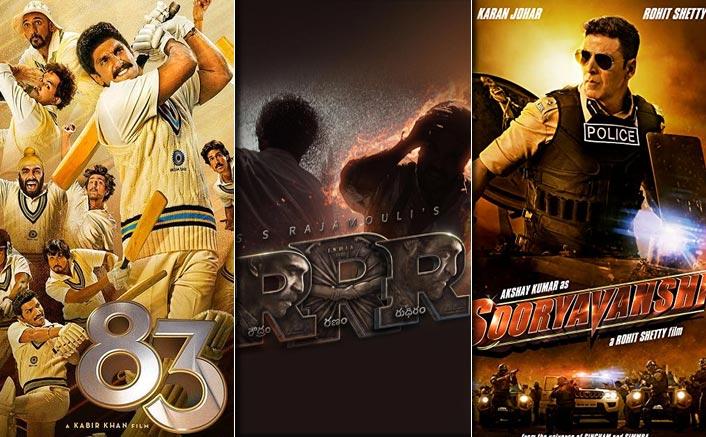 2020 was a dull year when we talk about many things – especially the number of movies that made its way to cinema halls. While this year was arid of releases, 2021 tells a totally different story.

From some of the most anticipated films of 2020 releasing next year to a few titles that have piqued our interest because of their cast or storyline, seems like we are going to spend almost every Friday in a cinema hall.

From titles like 83 and Radhe to Laal Singh Chadda and Sooryavanshi, here’s a look at some big-budget flicks we are sure are going to earn a lot for their makers at the box office.

This Kabir Khan directorial features an ensemble cast, including Ranveer Singh, Deepika Padukone, Pankaj Tripathi, Saqib Saleem, Boman Irani and more. Based on India’s first Cricket World Cup win in 1983, it is sure to create a blast at the box office as Indians love nothing better than cricket and Bollywood – and this is a combination of both.

One of the main reasons this Salman Khan, Disha Patani and Randeep Hooda starrer will work wonders at the box office is because we haven’t seen bhai on the silver screen for a long, long time. Directed by Prabhudeva, the film was one of the most anticipated movies of 2020 and now 2021.

Starring Yash, Sanjay Dutt and an array of other talents, this Prashanth Neel directorial is sure to emerge an even bigger hit than its first instalment. Just see the buzz surrounding the film! And also, who isn’t excited to meet Rocky Bhai again?

An S. S Rajamouli directorial, the film’s star cast is enough to be one of the many reason people will head to theatres. Starring NTR, Ram Charan, Alia Bhatt and more, give me one reason you wouldn’t want to head to a cinema hall to see it unfold?

Let’s give you some reason why you should head to the theatres to catch this film. One – it is the official adaptation of Tom Hanks’ Forrest Gump. Two – we will be seeing Aamir Khan on the silver screen for the first time since 2018’s Thugs of Hindostan. Do you need more motivation? I don’t think so

Another Salman Khan that is sure to set the cash register ringing is this Sajid Samji’s directorial. While nothing much is still known about the film, there is no doubt of the moolah it will generate at the box office.

This film, starring Alia Bhatt in the titular role, is the story of a young girl sold into prostitution and her journey to becoming the madam of a brothel in Kamathipura. Directed by Sanjay Leela Bhansali, the film is definitely one of the most awaited flicks of 2021, and we bet it be housefull!

A casting coop that is sure to make you anticipate the Aanand L Rai directorial. Featuring Akshay Kumar, Dhanush, and Sara Ali Khan – the film recently wrapped up its shoot, and we are waiting for an official release date.

Another film about cricket that is sure to get the cash registers ringing is Gowtham Tinnauri’s Jersey starring Shahid Kapoor. It is a remake of the 2019 Telugu film of the same name starring Nani.

Who isn’t waiting to see Akshay Kumar set the screen on fire as an officer? The next film from Rohit Shetty’s cop universe in Bollywood, the film also stars Katrina Kaif, Ranveer Singh and Ajay Devgn. This action filed flick is best to be watched in theatres, and we know many will do so.

While we know that these big-name, big-budget films are sure to create wonders at the box office, there are a couple of titles that are sure to be surprise hits. From Girl On The Train to Dhamaka and Sardar Udham Singh, here a list of 10 films that can turn out to be hidden gems.

Starring Saif Ali Khan, Arjun Kapoor, Jacqueline Fernandez, Yami Gautam and Jaaved Jaaferi, this casting coup is enough to make people head to the theatres to watch the Pavan Kirpalani directorial. It has the potential to create wonders at the ticket counters.

Directed by Gurmeet Singh, this Bollywood film stars Katrina Kaif, Siddhant Chaturvedi and Ishaan Khatter. The film has begun its shooting schedule, and we feel that it will work magic in theatres upon its release.

Starring Salman Khan in an extended cameo, this Mahesh Manjrekar directorial stars Aayush Sharma in a gangster avatar. All Bhai fans are sure to head to cinema halls to see him rip off his shirt – the recent pic shared makes us wait to see it.

Directed by Ram Madhvani, this Kartik Aaryan starrer sure has the potential to work wonders at the Bollywoood box office. The first look poster will even get you interested.

After seeing him create wonders as an army officer in URI, we are excited to see Vicky Kaushal as revolutionary freedom fighter Udham Singh in this Shoojit Sircar directorial. This actor-director duo is sure to get more than it invested according to us.

Directed by Satish Kaushik, this Bollywood film star the talent houses like Pankaj Tripathi. Seeing the impressive graph of Tripathi and knowing how Kaushik is behind the camera, we bet this film will receive more than what it expects.

A film based on the life of Indian women’s cricket team captain Mithali Raj we are sure this Taapsee Pannu starrer will work as good as other cricket films in Bollywood. Rahul Dholakia directs it.

Starring Ayushmann Khurana, this Abhishek Kapoor directorial has been shoot recently, and from the few snippets, the actor shared on social media we know this Bollywood film will go places.

Featuring Abhishek Bachchan in the lead, this Kookie Gulati is in the making since quite some while, and the hype surrounding it is not lessening at all. We believe it can work some magic with the audience.

Girl On The Train

An adaptation of Paula Hawkins’ novel of the same name features Parineeti Chopra as an alcoholic divorcee who gets embroiled in a missing person’s investigation on a train. Seems interesting.

Which Bollywood film are you waiting for the most in 2021?