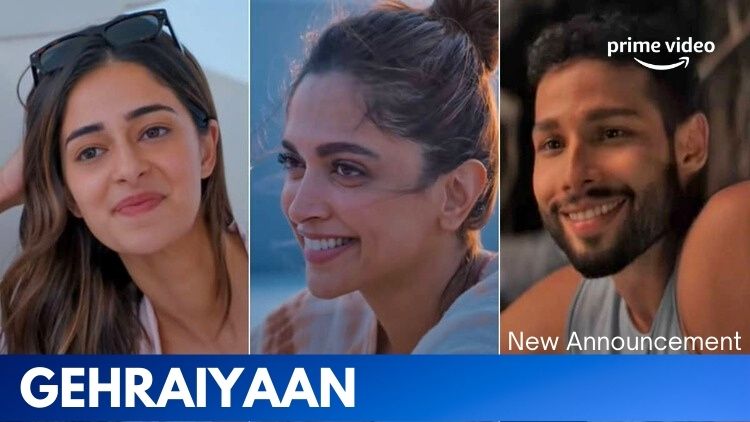 Following the highly praised Kapoor and Sons director, Shakun Batra’s debut is finally here. Gehraiyaan is planned to premiere on OTT on January 25, 2022. The movie will premiere on Amazon Prime Video. An exclusive world premiere was announced. In this film, Deepika Padukone, Siddhant Chaturvedi, Ananya Panday, and Dhairya Karwa are starring in the lead roles, whereas Naseeruddin Shah and Rajat Kapur play supporting roles.

This film is based on a relationship drama that digs into the roots of complicated modern dating and relationships, adulting, allowing and making decisions about someone’s path in life. Dharma Productions and Viacom18 Studios have joined hands with Shakun Batra’s Jouska Films.

The Director of the movie, Shakun Batra says that “Gehraiyaan is more than a film for me. It’s an adventure into the complexities of human connections, a reflection of modern loving relationships, and how we navigate through the jungle of thoughts, emotions, and feelings, as well as how each step, each decision we make influences our life with those living around us.”

Gehraiyaan, According to Karan Johar, is a dramatic, realistic, and genuine portrayal of modern adult relationships. The filmmaker has said that ” Batra, who is known for films like “Ek Main Aur Ekk Tu” and the widely praised 2016 drama Kapoor & Sons, has done an amazing job of conveying the complexity of human feelings. This, mixed with the genuine and passionate acting of the actors, creates a very engaging drama. We’re delighted to see ‘Gehraiyaan’ on Amazon Prime Video”. Johar also added that “After Shershaah, this is our second partnership, and we’re hopeful that viewers will connect with this movie’s widely attractive subject of love, friendship, and happiness vs desire.”

Plot of the Gehraiyaan

So Gehraiyaan’s storyline goes like this “Ananya Panday and Deepika Padukone portray siblings in the movie. Dhairya portrays Ananya’s love partner, whereas Deepika portrays Siddhant’s love partner. Shakun has indeed enjoyed complicated tales, and the difficulties arise when Deepika becomes physically attached to her younger sister Ananya’s boyfriend Dhairya. The whole affair situation has been handled sensitively, as is usual of Shakun, and it’s an emotional watch.”