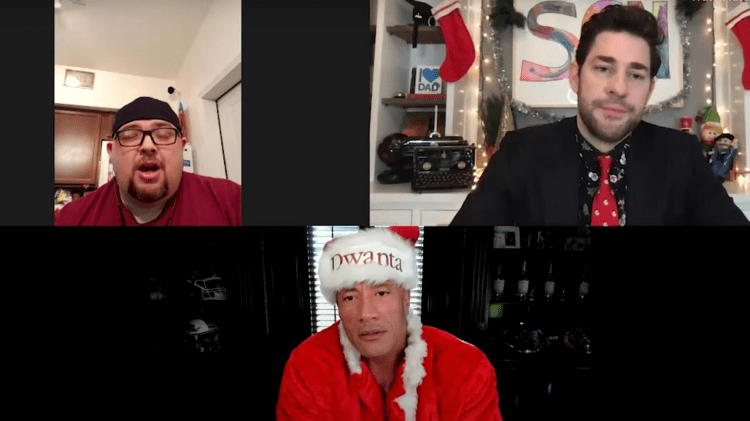 Hollywood star Dwayne “The Rock” Johnson’s latest role has seen him transform into a real-life Santa Claus to save one family’s Christmas.

The former wrestler came to the aid of a widowed father-of-two as part of fellow actor John Krasinski’s YouTube series, “Some Good News.”

“Super dad” Jay Abel was invited on Krasinski’s show after the host learned Jay – who lost his wife three years ago – was selling off memorabilia on eBay to raise money for his children’s Christmas presents.

Krasinski had actually been posing as a buyer on eBay, offering to buy up Abel’s items under a pseudonym, but had been banned after Abel suspected the account was fraudulent and pulled out of the sales.

Still wanting to help, Krasinski enlisted Johnson after noticing that Abel had previously tweeted The Rock to help raise awareness of his memorabilia sale.

@TheRock Hi Rock! I’m like your biggest fan! So I could use your help please. I’m trying to raise some money to be able to provide my children with a Christmas this year. If it’s not to much to ask, Would you please consider retweeting this please. Thank Uhttps://t.co/X84mxELnQ1

Johnson popped up on the video call, revealing he had been really moved by Abel’s attempts to provide for his family. Johnson then instructed Abel to take all his items off the auction site as he would personally be sorting Christmas for Abel and his two kids, Elisa, 8, and AJ, 11.

“I also want your kids to know what kind of father they have,” Johnson said. “So, I hear that you like comics… when this whole thing is done and when it’s safe, I want you to come down to Southern California and I want you to visit us at the DC Universe and we’ll show you around, give you a whole bunch of cool DC swag. But! It ain’t done there, either.”

Johnson then revealed he was going to get his official Black Adam script bound and signed once the upcoming movie had wrapped filming.

“I’ve got to tell you, you deserve it all, man,” Johnson said. “Your story is an inspiration. You are an inspiration, not only to myself, to Dwanta Claus, but certainly to John, certainly to everybody who hears your story. You inspire so many people because the truth is you represent so many parents around the world who are going through the struggle this Christmas.”