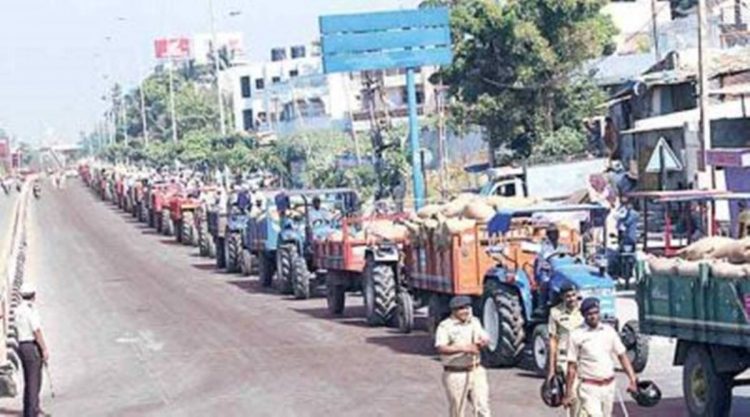 Backing the ongoing nationwide protest by farmers’ union against the three farm laws, Kehdut Sangharsh Samithi, comprising 23 farmers’ association of Gujarat, sat on a one-day token protest at Surat on Wednesday. The association also released a pamphlet depicting the losses to the farmers and the common man due to the three laws.

Pamphlets highlighting the disadvantages of the three farm legislation, which were released on the occasion, will be distributed by the 17 district heads of Gujarat Khedut Samaj and other farmers’ associations among farmers. Over five lakh copies of such pamphlets will be distributed, Sangharsh Samithi sources said.

The pamphlets further state that around 300 private companies in the country do contract farming with farmers. “As per the terms and conditions mentioned in the contract, the farmer gets paid for their farm produce as per the rates mentioned in the contract. In contract farming, if a conflict arises between companies and the farmers, and the latter faces loss, he cannot approach or take up the issue with the courts to get justice. In the Essential Commodities Act, any trader or company can store unlimited stock. If the price of farm produce reaches the sky, the central government will intervene and take action. Due to the stocking of the commodities, the prices will go high and common people will have to bear (the brunt for) it. The farmers cannot stock their farm produce. If the traders and companies stock the commodities, they will play with price rates of commodities as per their wish.”

President of Khedut Sangharsh Samithi Ramesh Patel said, “Today, we have distributed pamphlets among the leaders of the farmers’ body in south Gujarat. In the coming days, we will distribute it across the state. The leaders will make copies of such pamphlets and they will individually distribute it among the farmers in their areas and show them what are the disadvantages of new farm laws.”

He added that a meeting with all APMC and co-operative society presidents of south Gujarat has been convened at the Jining Mill compound to explain the disadvantages of the three farm legislation and seek their support.