Home EntertainmentGossips Happy birthday Ajay Devgn: From Kajol to Kareena Kapoor; 5 actresses who make best on screen pair with him

Happy birthday Ajay Devgn: From Kajol to Kareena Kapoor; 5 actresses who make best on screen pair with him 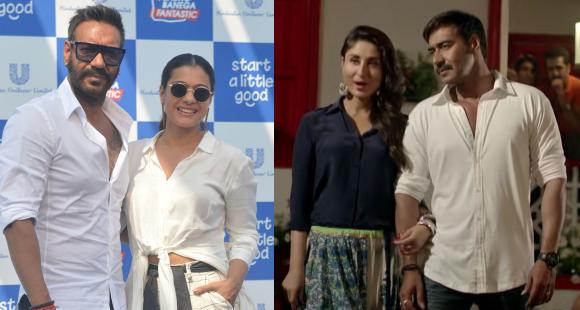 As Ajay Devgn turns a year older today, here is a look at some of his leading ladies who went on to grab the eyeballs with their perfect onscreen equation with the superstar.

Think about some of the most versatile actors in Bollywood and the list is undoubtedly incomplete without Ajay Devgn. The actor, who had made his debut with the 1991 release Phool Aur Kaante, had come a long way in his career of three decades wherein he has given 100 films. The Hum Dil De Chuke Sanam actor has won millions of hearts and has proved his mettle time and again on the silver screen. In fact, Ajay has also impressed everyone with his versatility and never shied away from experimenting with genres, roles and looks.

Interestingly, in his career of three decades, Ajay has also shared the screen space with several stars. While the two time National Award winner makers sure to present something new on the table every time he hits the silver screen, his chemistry with his leading ladies is also a thing among fans. Be it a family drama, gangster drama, comedy, or cop drama, the Shivaay star has made sure to leave the audience in awe of his onscreen chemistry with his leading ladies. So, as Ajay Devgn is celebrating his 52nd birthday today, we bring you a list of 5 actresses who make a perfect onscreen pair with the superstar.

Ajay Devgn and Kajol are among those celebrity couples who found love on sets. This power couple has been married for over two decades now and is often seen dishing out major relationship goals for the millennials. While Kajol and Ajay are a sight to behold in real life, their charm is unmissable on the silver screen as well. In fact, the duo had worked together in around 12 movies which include Hulchul, Ishq, Pyar To Hona Hi Tha, Tanhaji: The Unsung Warrior etc.

Ajay Devgn surprised everyone when he was seen romancing Kangana Ranaut in Once Upon A Time In Mumbaai and their chemistry did manage to set the screens on fire. Interestingly, this onscreen jodi was later seen in two movies – Rascals and Tezz.

The next actress on the list is Kareena Kapoor Khan who was paired opposite Ajay in 5 movies – Omkara, Golmaal Returns, Golmaal 3, Satyagraha and Singham Returns. While both the stars were also a part of L.O.C Kargil and Yuva, they did share the screen space in both movies. Interestingly, Bebo is one of the actresses who have explored different genres with Ajay. The Bachchan bahu has shared the screen space with The Legend of Bhagat Singh actor four times. They had first collaborated for Sanjay Leela Bhansali’s Hum Dil De Chuke Sanam and were later seen in Khakee, Hum Kisise Kum Nahi and Raincoat. Well, Aishwarya and Ajay do make an interesting onscreen pair, isn’t it?

Last but not the least, we have Ileana D’Cruz who grabbed a lot of attention with her sizzling chemistry with Ajay in Baadshaho and Raid. The lady was seen romancing the Singham actor in both the movies and it was a delight to watch them in one frame.