Hundreds of migrants freezing in heavy snow in Bosnia camp 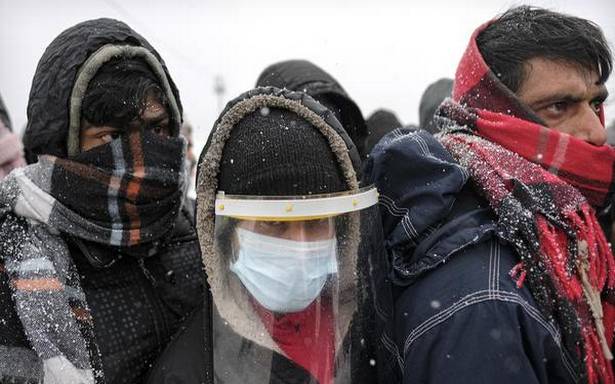 Hundreds of migrants were stranded Saturday in a squalid, burnt-out tent camp in Bosnia as heavy snow fell in the country and winter temperatures suddenly dropped.

A fire earlier this week destroyed much of the camp near the town of Bihac that already was harshly criticized by international officials and aid groups as being inadequate for housing refugees and migrants.

Despite the fire, Bosnian authorities have failed to find new accommodations for the migrants at Lipa, leaving around 1,000 people stuck in the cold, with no facilities or heat, eating only meagre food parcels provided by aid groups.

“Snow has fallen, sub-zero temperatures, no heating, nothing,” the International Organization for Migration’s chief of mission in Bosnia, Peter Van Der Auweraert, tweeted. “This is not how anyone should live. We need political bravery and action now.”

Bosnia has become a bottleneck for thousands of migrants hoping to reach Western Europe. Most are stuck in Bosnia’s northwest Krajina region as other areas in the ethnically divided nation have refused to accept them. The EU has warned Bosnia that thousands of migrants face a freezing winter without shelter, and it has urged the country’s bickering politicians to set aside their differences and take action.

On Saturday, migrants crowded at the camp to receive water and food provided by Bosnia’s Red Cross as police sought to maintain order. Some migrants wore face shields to protect them from coronavirus.

“We are living like animals. Even animals are living better than us!” said a man from Pakistan who identified himself only by his first name, Kasim. “If they not help us, we will die, so please help us.”

Plans to relocate the migrants temporarily to a closed facility in central Bihac have prompted protests by residents.

Left without a solution, migrants put down cardboard on the floor and set up improvised barriers for privacy inside the only standing tent at the Lipa camp. Some people held their wet feet above the small fires that migrants lit outside to warm up, while others wrapped up tight in blankets for warmth. Many migrants were wearing sneakers despite the snow.

To get to Croatia, migrants often use illegal routes over a mountainous area along the border. Many have complained of violence and pushbacks by the Croatian police.