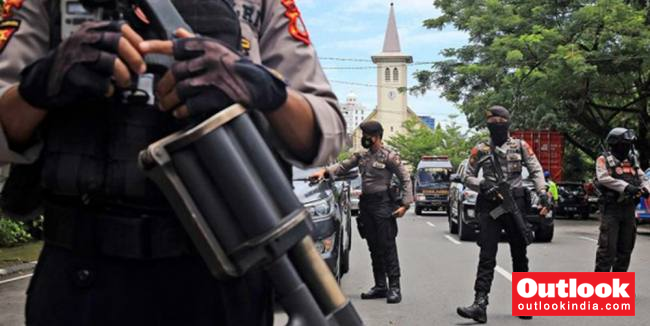 A suicide bomber blew himself up outside a packed Roman Catholic cathedral on Indonesia’s Sulawesi island during a Palm Sunday Mass, wounding at least nine people, police said.

A cellular video obtained by The Associated Press showed body parts scattered near a burning motorbike at the gates of the Sacred Heart of Jesus Cathedral in Makassar, the capital of South Sulawesi province.

Wilhelmus Tulak, a Catholic priest who led the Mass when the bomb exploded at about 10:30 am, told reporters that a loud bang shocked his congregation who had just finished the service.

Tulak said the church’s security guards suspected two motorists who wanted to enter the church. One of them detonated his explosives and died near the gate after being confronted by guards.

He said the attack caused no casualties among churchgoers.

Indonesia, the world’s most populous Muslim-majority nation, has been battling militants since bombings on the resort island of Bali in 2002 killed 202 people, mostly foreign tourists.

Attacks aimed at foreigners have been largely replaced in recent years by smaller, less deadly strikes targeting the government, police and anti-terrorism forces and people militants consider as infidels.