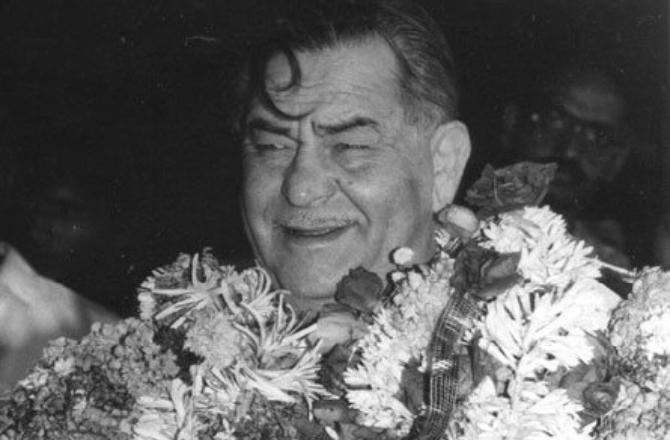 Bollywood stars including Kareena Kapoor, Karisma Kapoor, Shatrughan Sinha among many others on Monday remembered the late legendary actor Raj Kapoor on his 96th birth anniversary. By sharing a monochromatic photograph featuring Raj Kapoor, his wife Krishna and her father Randhir Kapoor, the ‘Tashan’ star penned a note remembering the iconic actor. She noted, “There will never be another… Happy birthday Dadaji.”

The ‘Raja Hindustani’ star and Kareena’s sister also shared an adorable childhood picture with her grandfather on Instagram and wrote, “So many learning’s from my Dadaji..remembering you on ur birthday.. #grandpalove #legend.”

Karisma’s cousin and daughter of late Rishi Kapoor, Riddhima Kapoor Sahni shared a childhood picture with her other cousins sitting in the lap of their late grandfather. She noted alongside the throwback picture, “Miss you.”

Ranveer Kapoor’s mother Neetu Kapoor shared a picture from her wedding on the occasion. It has Rishi and Raj Kapoor in the frame. “Remember n miss both of them !!!”

The ‘Naseeb’ actor – Shatrughan Sinha dug out priceless throwback picture with the ‘Shri 420’ star and marked the occasion of his birth anniversary.

He tweeted “Remembering with warmth & fondness the 1st & the best showman of Indian cinema, handsome, debonair, most talented actor, producer, director, late & great #RajKapoor on his birth anniversary. He has been my greatest motivator, role model as I grew up watching his brilliant craft.”

Remembering with warmth & fondness the 1st & the best showman of Indian cinema, handsome, debonair, most talented actor, producer, director, late & great #RajKapoor on his birth anniversary. He has been my greatest motivator, role model as I grew up watching his brilliant craft.

Expressing his love for the ‘Great Showman’, he added, “Though, we hardly have any similarities, watching him has been my greatest learning experience in showbiz. Main Raj Kapoor ka deewana tha, deewana hu, aur deewana rahunga. His penchant for music, grandeur on celluloid have been a visual treat. Thank you for the creative brilliance you have left us to treasure for a lifetime.”

Film actor, producer and director — Raj Kapoor — is widely regarded as the greatest showman in the history of Indian cinema and entertainment. Winner of several accolades the iconic Bollywood star has been honoured with the Padma Bhushan in 1971 for his contributions to the arts. In 1987, the late actor was bestowed with the Dadasaheb Phalke Award.