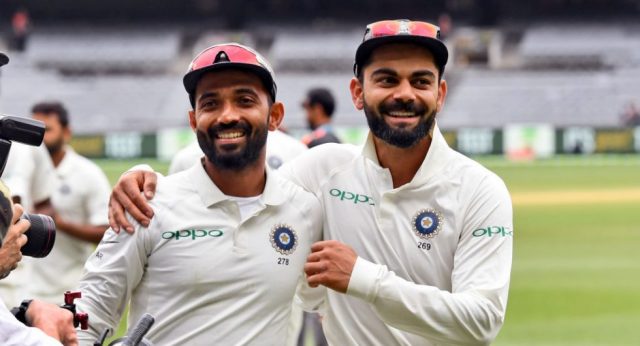 The Virat Kohli-Ajinkya Rahane captaincy debate is the hot topic of discussion in Indian cricket in recent times. India’s loss against England in the first Test has fuelled the controversy all the more. Virat has lost his last four Tests as captain, while Rahane is unbeaten so far in the Tests that he has led India in. Meanwhile, former Bengal skipper Manoj Tiwary has stated his opinion on the same.

Talks for Rahane to take over Kohli started doing the rounds ever since the former took the side to a memorable 2-1 series win versus Tim Paine-led Australia, in the Border-Gavaskar Trophy 2020/21, in the absence of Kohli.

Tiwary acknowledged Rahane for his leadership role in Australia and said on Sportskeeda Live, “Whatever little I saw in Australia, Ajinkya Rahane was very good. He made the bowling changes quite well. You don’t need to be a quiet guy to be a good captain; you can be expressive too. The difference is in their style. Rahane’s captaincy style is very different from what we see from Virat Kohli. If allowed to lead India, I am sure Rahane will do a good job. I don’t know when that time will come. He has to score consistently to keep away the talks of him getting dropped from the Test side.”

Also Read: Twitter Stunned After Virat Kohli Gets Out On A Duck In The 2nd Test

He further said that there should be no controversy around the captaincy debate after what Ajinkya Rahane has said on Virat Kohli recently.

Meanwhile, Virat Kohli had another disappointing outing with the bat in the second Test against England. He was out for a duck in the first innings by a peach of a delivery from Moeen Ali.