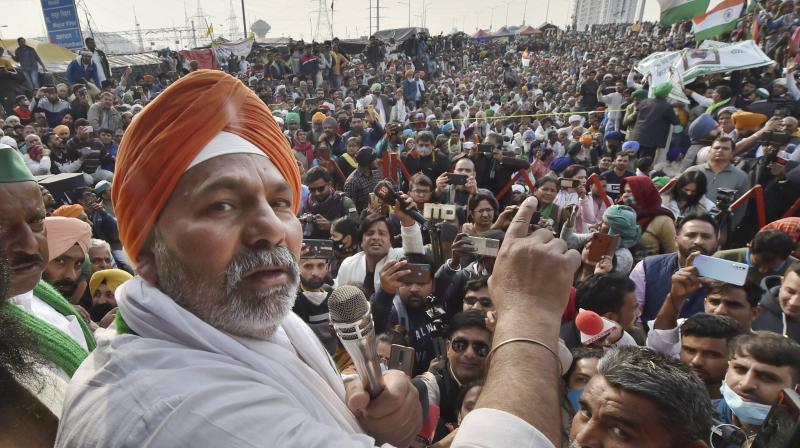 NEW DELHI: Farmers protesting at the three sites at Delhi’s borders held a day-long fast, between 9 am and 5 pm, as they observed “Sadbhavna Divas” to mark the death anniversary of Mahatma Gandhi. Meanwhile, hundreds of farmers stayed put at the Ghazipur border on Saturday morning, as more supporters poured in at the protest site on the Delhi-Meerut Expressway in Ghaziabad following which Delhi Police shut down NH-24 highway and all roads leading to Ghazipur border. Union home ministry temporarily suspended internet services in Singhu, Ghazipur, Tikri borders and their adjoining areas from 11 pm of 29 January to 11 pm of 31 January to “maintain public safety and averting public emergency” amid the ongoing farmers’ protest.

Meanwhile, the Special Investigation Team (SIT) of the crime branch of Delhi Police has issued a second notice to nine farmer leaders, including Rakesh Tikait.

The Delhi police carried out raids in Punjab’s Jalandhar on Friday to arrest Jugraj Singh and Navpreet Singh who hoisted the Nishan Sahib flag at Red Fort on January 26. Meanwhile, 38 cases have been registered till now in farmer’s rally matter and 84 persons have been arrested, according to the police.

Security personnel, including from anti-riot police and paramilitary forces, were deployed in massive strength. Multiple layers of barricades, including concrete blocks, were being put at the protest sites.

The farmer leaders on Saturday morning, wearing garlands, observed “Sadbhavana Diwas”  (Harmony Day) and observed fast on Saturday after the immense outrage over violence by protesters during their Republic Day tractor rally. The farmer leaders sat on the dais during the fast, as crowds of supporters swelled, especially in Ghazipur where the Bharatiya Kisan Union (BKU) is leading the protest.

“The farmers have fought this battle for over two months now and they won’t relent or retreat,” said Rakesh Tikait, the BKU spokesperson.

Till now, the agitation was seen as mainly being led by Punjab-based farmer unions.

A multitude of green-and-white caps, symbolic of the unions spearheading the battle, union flags and the tricolour, planted on tractors dotted the highway. On various tractors and camps, photos of legendary farmer leaders such as Chaudhary Charan Singh and Mahendra Singh Tikait were put up.

Several Opposition parties, including the Congress, TMC AAP, RLD and the Left, have openly supported the stir. Abhimanyu Kohar, a senior member of Samkyukt Kisan Morcha (SKM), said that the ongoing agitation would gain strength, as farmers in large numbers will join them in the coming days.

Farmer leader Balbir Singh Rajewal, president of the Bharatiya Kisan Union (Rajewal), said in Chandigarh that he expected a record gathering by February 2 at the border points of Delhi.

“People in large numbers from Punjab, Haryana, Uttar Pradesh, Rajasthan and Uttarakhand are reaching the protest sites. Possibly by February 2, there will again be a record gathering of people at the protest sites,” he said, adding that the agitation would remain peaceful.

Rajewal also criticised the Haryana government for suspending Internet services. He accused the Centre of instilling a sense of fear among people by showing pictures of the “unfortunate incidents”, apparently referring to the January 26 violence in the national capital.

To a question on joining the investigation following notices issued by the Delhi Police to farmer leaders in connection with the Republic Day violence, Mr Rajewal said, “We will send them a reply.”

The Delhi Police has issued notices to around 20 farmer leaders, including Mr Rajewal, over the violence during the farmers’ tractor parade, asking why legal action should not be taken against them.

A team of forensic experts on Saturday visited the Red Fort, where the protesters had indulged in vandalism, hoisted a religious flag and attacked the police personnel, to collect evidence.

The police had on Friday used tear gas and baton charge to break up a clash between farmers and a large group of men who claimed to be local residents at the Singhu border.

The Delhi Traffic Police said that the movement on the National Highway 24 (Delhi-Meerut Expressway) has been stopped.

Thousands of farmers have been protesting at Delhi’s borders with Haryana and Uttar Pradesh, demanding a rollback of the Farmers’ Produce Trade and Commerce (Promotion and Facilitation) Act, 2020,  the Farmers (Empowerment and Protection) Agreement on Price Assurance and Farm Services Act, 2020 and the Essential Commodities (Amendment) Act, 2020.

The protesting farmers have expressed apprehension that these laws would pave the way for the dismantling of the minimum support price (MSP) system, leaving them at the “mercy” of big corporations.

However, the government has maintained that the new laws will bring better opportunities to farmers and introduce new technologies in agriculture.

Due to misleading and false information by the Caravan that a farmer protestor has died due to police firing, a case has been registered in IP Estate Police station. FIR includes certain others also who also tried to mislead the public, cops said.

As per post-mortem report the cause of his death is shock and haemorrhage due to a head injury received after his tractor overturned.