Protesters clash with cops at Paris protest against police violence 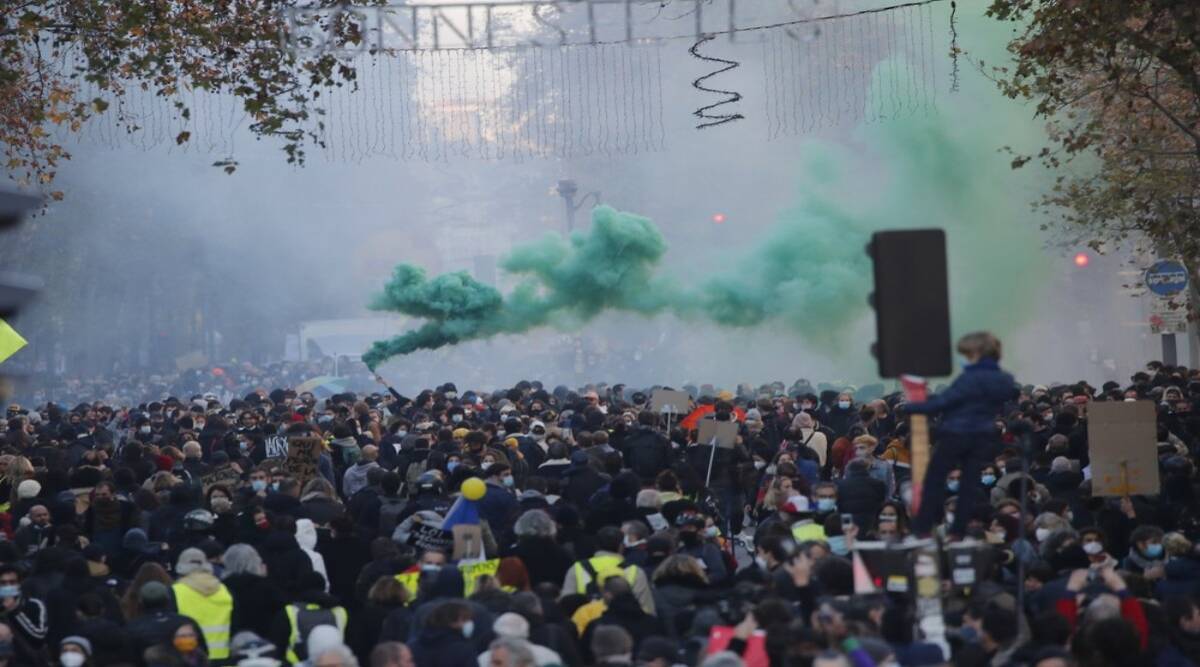 
Protesters march during a demonstration against a security law that would restrict sharing images of police, Saturday, Nov. 28, 2020 in Paris. Civil liberties groups and journalists are concerned that the measure will stymie press freedoms and allow police brutality to go undiscovered and unpunished. The cause has gained fresh impetus in recent days after footage emerged of French police officers beating up a Black man, triggering a nationwide outcry. (AP Photo/Francois Mori)

Hundreds of black-clad protesters clashed with police at the end of a demonstration against police violence in Paris on Saturday after masked protesters launched fireworks at police lines, put up barricades and threw stones.

The majority of the thousands of demonstrators marched peacefully, but small groups of masked protesters dressed in black smashed shop windows and set two cars, a motorcycle and a cafe on fire.

The fires were put out quickly.Police fired tear gas and stun grenades to disperse the crowds and in early evening water cannon sprayed remaining groups of protesters on Place de la Bastille.

The interior ministry said it had counted 46,000 protesters in Paris. Police said they had made nine arrests.Thousands of people also marched in Lille, Rennes, Strasbourg and other cities.

The protests follow the publication this week of CCTV footage of the minutes-long beating of Black music producer Michel Zecler by three police officers in Paris on Nov. 21. The incident has also fanned anger about a draft law that is seen as curbing the right of journalists to report on police brutality.

The bill would make it a crime to circulate images of police officers in certain circumstances, which opponents say would limit press freedom. Many protesters carried placards with slogans like “Who will protect us from the police”, “Stop police violence” and “Democracy bludgeoned”.

The images of Zecler being beaten have circulated widely on social media and in the French and foreign press. President Emmanuel Macron said on Friday the images were shameful for France.

Four police officers are being held for questioning as part of an investigation into the beating.

“What is happening in Paris is extremely worrying and we cannot let this pass. I have spent two years with the yellow vests and I have seen all the violence,” demonstrator Caroline Schatz told Reuters at the Paris march.

The journalists’ organisations and civil liberty groups who organised the marches were joined by far-left militants, environmental activists and yellow vest protesters.

The yellow vests have been protesting against government policies for two years.

SLR: Why professional protesters should stick to their day jobs