Rakhi Sawant’s journey in Bigg Boss 14: Fun and fake relationships and a thirst to win 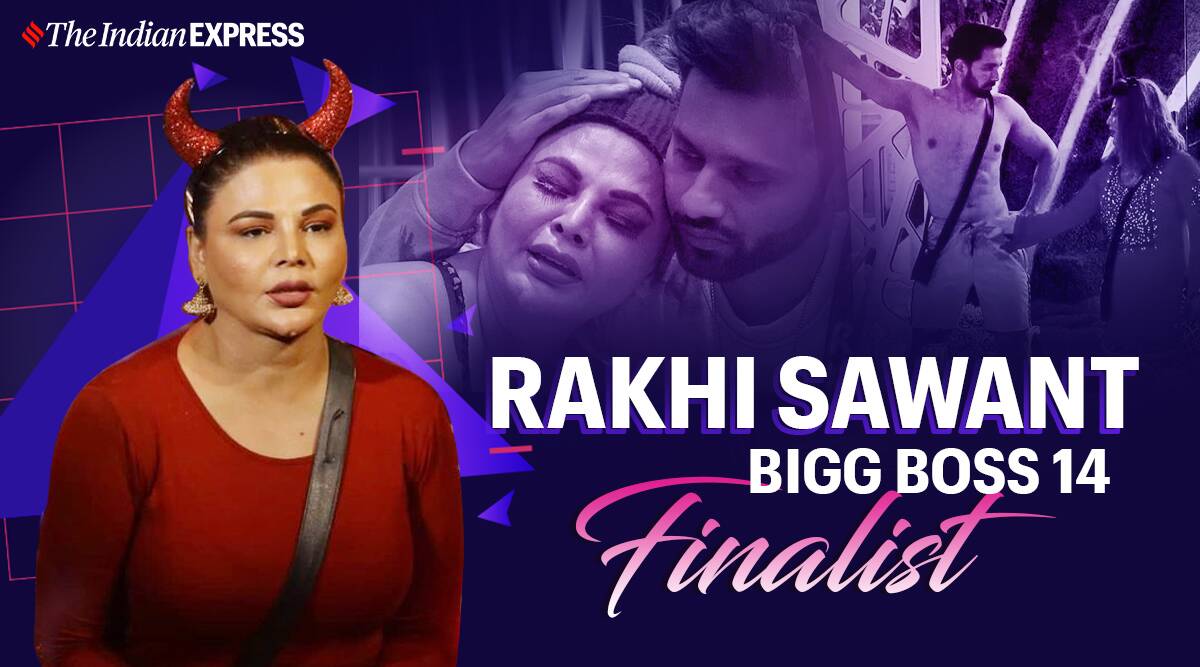 When Bigg Boss debuted in 2006, it provided a platform for audiences to know their favourite or not-so-favourite personalities up close and personal. One of them was Rakhi Sawant. Back then, a naïve Rakhi left quite an impact on the audience with her antics. The viewers still remember how she cried for Amit Sadh, claiming that she has fallen in love with him.

Cut to 2020, and seems like things have not changed much as she is back on the reality show after 14 years. Her mode of entertainment, however, has not changed.

In spite of the time that has passed, Rakhi’s modus operandi hasn’t changed on Bigg Boss. However, there was a growing curiosity about her, especially about her marital status and husband Ritesh. The present edition also fulfilled one of her wishes : to be one of the finalists.

With the Bigg Boss 14 finale around the corner, here’s a throwback to Rakhi’s journey on Bigg Boss 14 and her stand-out moments.

A love-hate relationship with Abhinav Shukla

Talking about Rakhi in Bigg Boss 14 will be incomplete without mentioning her equation with Abhinav Shukla. As soon as she entered the house, Rakhi developed a unique relationship with Abhinav and his wife Rubina Dilaik, often expressing that she sees her relationship with husband Ritesh reflected in their bond. Rakhi told Abhinav that she will casually flirt with him as a means of offering audiences “entertainment” and promised to stick to her boundaries. Her one-sided romance not only got TRPs for the show but made it entertaining.

However, as time passed by, things changed for the worse. Rakhi, who did not leave any chance to express her admiration for Abhinav, irked the latter when she wrote his name all over her body with lipstick. An irritated Abhinav began to ignore her, but in vain. Her statement on Abhinav’s hug made their equation even worse.

During one of the Weekend Ka Vaars, Salman reasoned that her antics were helping only Abhinav. When Rakhi and Abhinav’s equation ended, it naturally affected her bond with Rubina. While Rakhi felt that Rubina never supported her, the latter said she felt hurt the way Rakhi disrespected her and Abhinav’s emotions.

When Salman made Rakhi’s bed

Rakhi’s entry in Bigg Boss 14 was not received well by the contestants. Their reactions differed–  Nikki Tamboli along with Jasmin Bhasin accused her of being unhygienic. Nikki even refused to make Rakhi’s bed despite Salman Khan’s request, which eventually led to the actor entering the house to make Rakhi’s bed and teach Nikki a lesson.

The battle of Rakhi and Jasmin

Rakhi was involved in heated arguments with almost everyone in the house. But apart from the Abhinav episode, her fight with Jasmin is the one to remember. An irritated Jasmin, after an argument, tried to put on a mask on Rakhi’s head, which left the latter crying in pain. While Jasmin argued she had no intention to hurt and Rakhi is only making a scene out of it, Salman Khan revealed that Rakhi was injured and was prescribed some painkillers by doctors. He added that she refused to leave the house because ‘she wants to win.’

There were always speculations about Rakhi’s marriage. Even in the Bigg Boss house, people were confused about her marital status and often joked about how Ritesh does not exist. However, in one of the episodes, the audience witnessed Rakhi breakdown in a conversation with Rahul Vaidya. She revealed that she was unaware of Ritesh being already married to someone else. Later, Rakhi and Rahul were called into the confession room and advised to not share such personal information on the national television.

Rakhi’s video-chat with her mother

During the family special episode, Rakhi, who wished to see Ritesh, spoke to her mother via video call. Her mother, who was being treated for cancer in a hospital, said she is proud of Rakhi. She told the housemates that Rakhi is not a liar.

The conversation between Rakhi and her mother moved the audience and the housemates to tears.

When Julie sent chills down the spine

Rakhi’s last resort of entertainment was her make-belief character Julie, who surfaced whenever she was upset. The first time Rakhi pretended to be Julie, she was a spirit which has been in the Bigg Boss house for 200 years. She ended up scaring everyone, including the housemates. But Julie went onto became famous and became a talking point of her Bigg Boss journey.

Well, only the video is enough to explain this moment that made Rakhi viral on social media for all the good reasons, thanks to Yashraj Mukhate.

Rakhi finally made it to the finale!

To make a place in the finale, the task required the contestants to shred a cheque of a certain amount of money, which would have gotten deducted from the winner’s amount. For Rakhi, it was only the sure shot way to get to the finale. While Rahul and Aly tried to convince Rakhi by hook or crook, the actor did the needful. She shredded the cheque and became the second finalist after Nikki. She fulfilled her dream of becoming the finalist.

All in all, Rakhi’s Bigg Boss 14 journey was a whirlpool of emotions, game plans and zeal to win. She made sure to make the right moves, which not only led her to the finale but also made her win hearts.

Apart from Rakhi, the finale will see Rubina, Aly and Rahul competing for the winner’s trophy of Bigg Boss 14. The finale will air on Colors TV on February 21.