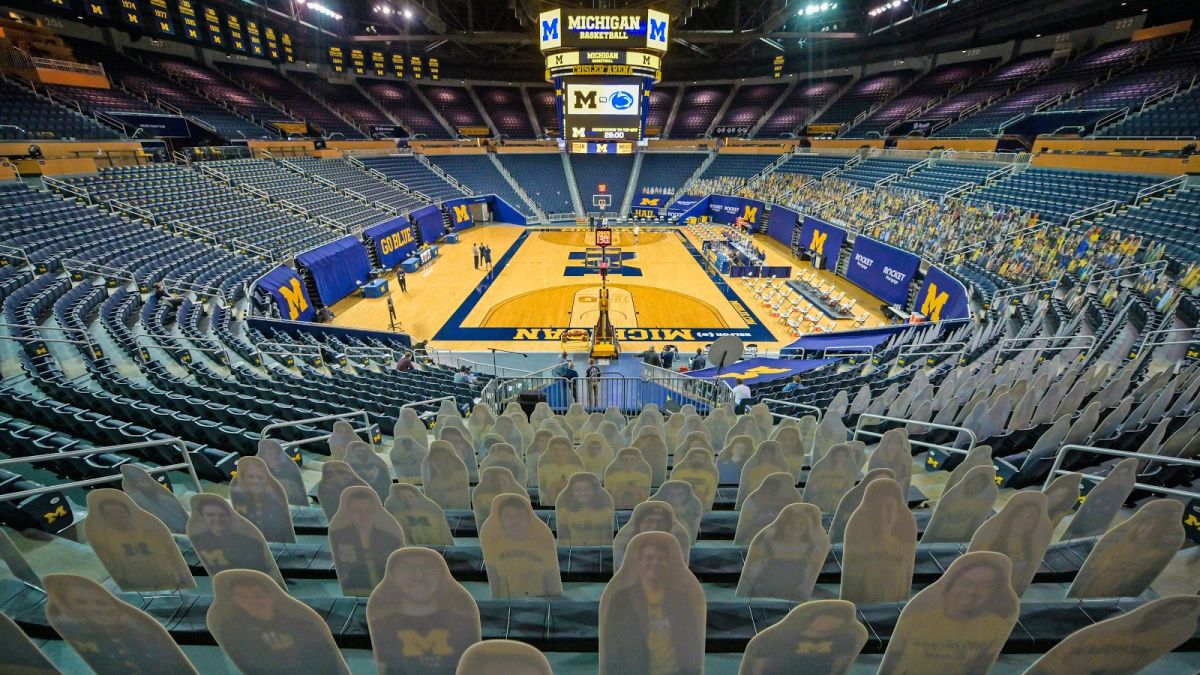 Stop me if you’ve heard this one before: the University of Michigan can’t play games due to the coronavirus.

A little over a month after COVID-19 kept the Wolverines football program from playing against Maryland, Ohio State, Iowa, and in a potential bowl game, the entire athletic program is on pause, with the school suspending all sports for 14 days due to confirmed cases of the virus’ B117 variant.

“Canceling competitions is never something we want to do, but with so many unknowns about this variant of COVID-19, we must do everything we can to minimize the spread among student-athletes, coaches, staff, and to the student-athletes at other schools,” said Michigan Athletic Director Warde Manuel.

As you can guess, the students want to play.

The timing couldn’t be worse for the athletic department, with three of its programs making (positive) national headlines over the last week. The track team’s Ziyah Holman went viral after her performance in the 4×400 relay, where she surged as her team trailed by four seconds.

On the court, the men’s basketball team is quietly off to one of its best starts in program history. Ranked No. 4 in the country at 13-1, Michigan has cracked the top five for the second consecutive year under head coach Juwan Howard. And on the women’s side, Naz Hillmon is still riding high after scoring a school-record 50 points to go along with 16 rebounds in a recent loss to historic rival Ohio State.

Back in May, Michigan President Mark Schlissel — a Ph.D chemist and medical doctor who is the first physician-scientist to run the school — sought to keep his students away from the playing field while other schools were trying to figure out how to play in a pandemic.

“Any decision we make for this coming fall is likely going to be the case for the whole academic year. What’s going to be different in January?” he told the Wall Street Journal back then, as he announced that football wasn’t happening in 2020 unless students were back on campus.

That precaution went away when it was revealed how much money the school would lose without a football season. In September, Michigan’s athletics department eliminated 21 staff positions and decided not to fill another 15 open slots, as the university was expecting to lose $100 million in revenue without football on Saturdays. According to the U.S. Department of Education, the university’s revenue in 2019 from football alone was over $122 million.

Those kinds of numbers are why collegiate sports are still powering through the pandemic, especially college basketball, which is the NCAA’s cash cow. According to reports, the NCAA lost $600 million in revenue due to canceling the 2020 NCAA Tournament. College basketball is so important that in 2019 the NCAA took in most of their revenue ($1.12 billion) from the men’s tournament.

So if you’re wondering why Michigan, along with every other Division I school in the country, continues to accept cancelations, postponements, and pauses to their seasons, it’s because they can’t afford not to. This is what happens when a large part of the collegiate educational structure is based on how many millions unpaid teenagers can generate.