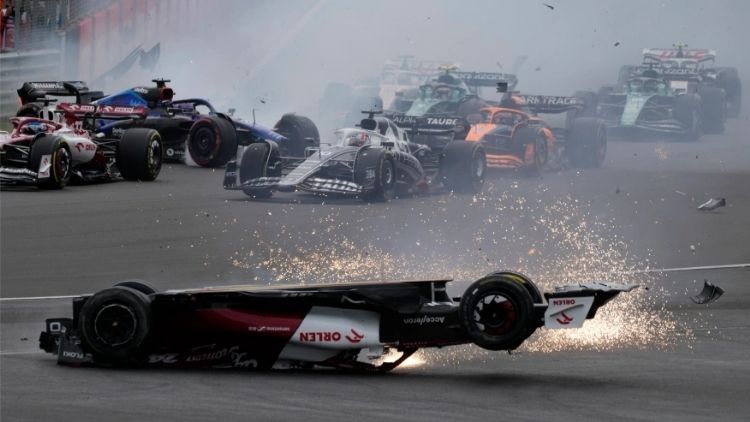 Formula 1 narrowly avoided disaster on more than one occasion in the opening moments of the British grand prix. Not only did Alfa Romeo driver Zhou Guanyu escape unhurt from a terrifying first corner crash but the resulting red flag saved us from potentially witnessing a tragedy. Protesters had invaded the track after the start of the race and because of the red flag did not encounter the cars at racing speed.

Everyone in F1 was massively relieved when confirmation finally came through that Zhou Guanyu was okay after the first corner accident. The accident led to his car skating along upside down then vaulting the tyre barrier and coming to rest behind it. Zhou’s car was tipped upside down at speed when Pierre Gasly looked for a gap between the Alfa Romeo and George Russell’s Mercedes. The contact between Gasly and Russell turned Russell’s car left. This caused his left front wheel to make contact with Zhou’s right rear, dramatically turning it over on the approach to the first corner.

Zhou’s car then slid across the asphalt runoff at speed upside down and then into the gravel trap. The car then dug in flipping it back over. As it did that it leapt into the air clearing the tyre barrier entirely. The car was prevented from traveling any further towards the grandstands by the catch fencing. Fortunately Zhou’s car went into the fence at an angle that protected his head as while he had the added security of the halo around his cockpit. The upside down trip through the runoff and the impact with the gravel had damaged the roll hoop above his helmet. The scary nature of this accident didn’t end there as Zhou’s car came to rest on its side behind the tyre barrier that made the extraction process incredibly difficult for the recovery crews.

Russell, who abandoned his damaged car to run to the scene of the accident to check on Zhou, said F1 needs to learn lessons from the position the Alfa Romeo ended up in. It left Zhou with no way of getting out of the car on his own. Once it was established that Zhou hadn’t suffered any serious injuries he was kept in the circuit medical center for monitoring. He was eventually declared fit and released from the medical center and was seen in the paddock during the race talking to F1 boss Stefano Domenicali.

Williams driver Alex Albon was sent to hospital for checks after being involved in a secondary incident at the start. Albon backed off in reaction to Valtteri Bottas slowing down as the Zhou accident took place just ahead of them. But Albon was hit by an unsighted Sebastian Vettel that sent the Williams car into the concrete pit wall on the inside of the track. It was then hit again by Esteban Ocon and Yuki Tsunoda.

In addition to the news that Zhou and the other drivers involved escaped serious injury in the dramatic crash there was another unexpected upside to the red flag. It coincidentally prevented a very very dangerous situation arising following an attempted track invasion. The local police had warned ahead of the weekend that credible intelligence informed them that protesters planned to enter the track during the grand prix. While the first lap crash was being dealt with under the red flag it quickly emerged that several people had got onto the circuit on the Wellington Straight.

An F1 and FIA statement said these people only attempted to enter the track after the start. But images from trackside and the onboards from several of the cars clearly showed them sitting on the circuit. Five protesters from Just Stop Oil invaded the circuit as the leading cars were going past, fortunately at reduced speed due to the red flag. The rapid suspension of the race meant the cars returned to the pit lane at the end of lap 1 so they never reached that part of the circuit a second time.

While the track invaders were present a couple of cars did encounter them after they sat down on the track. FIA said the matter is now being dealt with by the local authorities. Had the race continued and a full grid of cars made it round to the Wellington straight with those protesters on the track the outcome could have been horrific.

Lewis Hamilton and Sebastian Vettel took a slightly more sympathetic view. ettel said he sympathized with their fears and anxieties about the future of the planet although he questioned the decision to risk the lives of drivers and Marshals. Hamilton’s first response when he was asked about it was big up those guys and he later added “I love that people are fighting for the planet and we need more people like them.” Mercedes then later followed up Hamilton’s comments with a clarification saying he was endorsing their right to protest but not the way they did it.