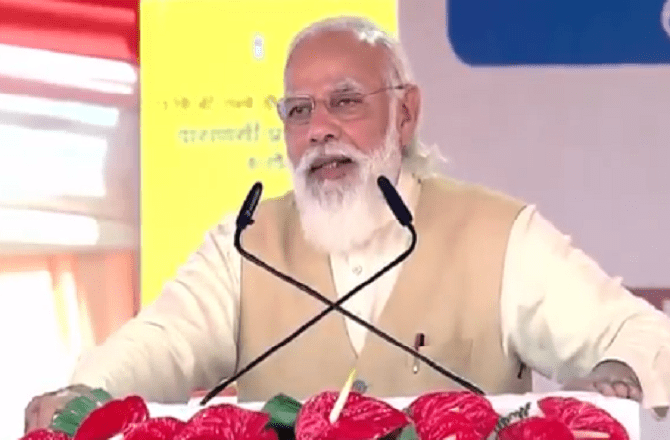 Prime Minister Narendra Modi on Friday flayed the opposition for supporting farmers to oppose the three new central agricultural laws, claiming that the rival parties were using the shoulders of farmers to attack his government.

Addressing the ‘Kisan Mahasammelan’ in Bhopal in Madhya Pradesh virtually, he said that opposition parties were playing games to regain lost political ground by creating a web of confusion and lies.

“I wish to tell all political parties that they can keep political credit. I don’t want credit. I only want the lives of Indian farmers to be easy, want their prosperity, and modernity in farming. Stop misleading them, stop confusing them,” Modi remarked.

Taking a dig at the opposition without naming any party, the Prime Minister said that he felt that they were pained not by the improvements brought about in the agricultural laws by his government but by the fact that Modi had been able to do what they had been saying all these years but could not do.

Modi also listed the advantages of the new agricultural laws enacted in September.

“These agrarian reform laws atone for the sins committed in the past decades by tying farmers to agricultural ‘mandis’ only. I can say with confidence that there is no reason for mistrust or room for lies in the recent agricultural reforms we have brought about.”

Referring to the problems farmers faced in the past, Modi said: “Today, there is no news about shortage of urea; farmers do not have to face batons of police to buy urea. We have worked with sincerity to remove this problem of farmers. I will like to remind farmers about the urea situation in the past. Remember, what the situation was 7-8 years ago? Whether farmers had to stand in queues overnight to buy urea or not? In many places, were there news about lathicharge on farmers or not?”

The Prime Minister also hit out at the Congress, saying that the debt waiver by Congress governments was the biggest example of how farmers were cheated.

“When elections were to be held in Madhya Pradesh two years ago, a loan waiver was promised within 10 days. Debts of how many farmers were waived?” he asked.

Modi again strongly defended the three new central agricultural laws, pointing out that these laws as part of the reforms had not come into existence overnight.

“There has been a lot of discussion on the new farm laws for the past many days. These agricultural reform laws did not come about overnight. Every government in the past has discussed these issues in the last 20-22 years. We also discussed them extensively. More or less, all farmer organisations have discussed it — farmers, their unions, agricultural experts, agricultural economists and scientists, progressive farmers have been continuously demanding reforms in the agricultural sector.”

The Prime Minister also asked the farmers to seek answers from those who had been advocating these agricultural reforms in their poll manifestos but did nothing.

“If the old manifestos of all political parties are brought out, their past statements heard, and the official letters from those who earlier handled agriculture seen, then the agricultural reforms brought today are no different from theirs. My government is dedicated to the farmers and considers them as ‘annadatas’.”

“We took out the Swaminathan Committee report that was dumped in a pile of files and implemented its recommendations, gave MSP of one and a half times the input cost to farmers. These people (opposition) ensured that their governments did not have to spend much on farmers. They merely used farmers for their own politics,” the Prime Minister said.