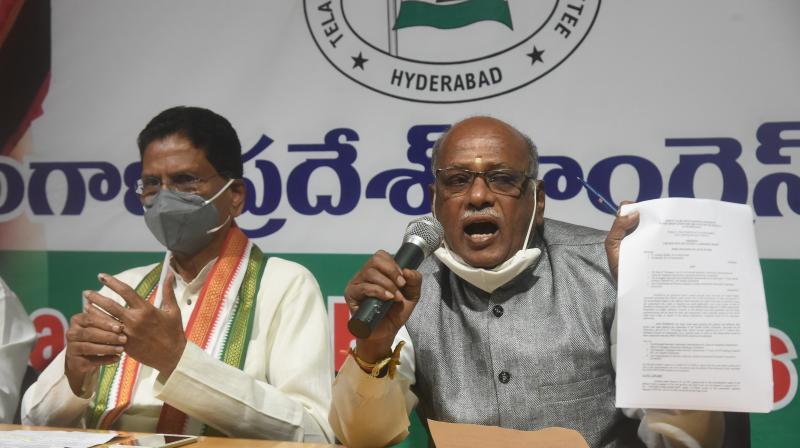 Hyderabad: It is only apt that the Grand Old Party has a de facto prelims method of the American politics at work to decide on the next Telangana Pradesh Congress Committee (TPCC) chief, after its current incumbent Uttam Kumar Reddy, the only known decorated armed forces officer in politics, took responsibility and resigned after a series of dismal electoral debacles.

Under Uttam Kumar Reddy, the Congress has not failed to unseat the ruling Telangana Rashtra Samithi (TRS), but has even lost the right to be called its principal challenger, that mantle now having shifted to the Hindutva party.

The free for all fight is on, perhaps the only deserving bet in the country to be accused rightfully of “too much democracy”, with each candidate, much to the chagrin of the high command, going all out in lobbying for the post with senior Congress leaders in Delhi, writing letters to the high command, and running social media campaigns or leaking information against each other to their favourite media outlet.

A day after AICC in-charge Manickam Tagore reportedly submitted his ‘findings’, collating opinions of a wide range of leaders on who they prefer as the next TPCC president, serious leaders who are expecting a post landed in the national capital on Wednesday for lobbying.

The high command has two important axes of dilemma, as per sources. One, should it be a Reddy or a non-Reddy candidate who will lead the Congress from hereon, and two, when should the announcement be made.

The timing is crucial with reports that the by-election to the Nagarjunsagar Assembly polls may take place in February, coinciding with the Tirupati Lok Sabha by-poll in AP. Should the new president be named before, giving him too little time or to the fight the poll under existing scenario.

The Reddy question is far more vexatious. The party has realised that the Reddy community, which is about eight to nine odd percentage of the electorate, but its leaders are not able to get the votes. The Reddy community, mostly landed farmers, had moved towards TRS after it implemented the Rythu Bandhu scheme, and is now very rapidly gravitating towards a resurgent BJP.

Non-Reddy leaders argue that with Reddy voters having left the party, the best chance for revival of the party lies in tapping the SC, ST, and OBCs, which along with trying to tap the minorities, is the best bet for the Congress.

However, the clout of the Reddy leaders in the party is visible. First among equals, and the principal contender, is Lok Sabha Member of Parliament, a four-time MLA, who famously resigned from ministership for Telangana agitation, Komatreddy Venkat Reddy. A life-long Congressman, he has risen the ranks from NSUI and Youth Congress.

He reportedly met Congress President Sonia Gandhi and former president Rahul Gandhi separately in New Delhi, pressing for his candidature. Later, speaking to media at Janpath, he said that he had requested the party chief to give hardworking party loyalists a chance, so the party can come back to power in Telangana.

Sources in the Congress party say that in high command assessment, while Komat Reddy is capable of leading people and raising funds, he has the habit of shoot-off his mouth and perhaps lacks the maturity and stability to build a consensus and take everyone along.

“No one is a prime contender,” a senior Congress leader and union minister in the UPA decade of power said. “Party is looking for alternatives across all sections of society, Reddy or SC or BC. Based on the feedback from AICC in-charge, other AICC secretaries, an independent study, the high command has shortlisted a panel. But it is a very long panel right now, with most serious contenders being in the fray.”

The second name being touted is Jana Reddy, formerly home minister and whose leadership would be acceptable to everyone. Given the Nagarjunsagar byelection slated ahead, which the party must win to remain in contention for the state politics seriously, rising his ire might lead to losing him, his son and the Assembly bypoll.

“Jana Reddy is a non-controversial leader. But no one will trust him to lead the party and defeat the KCR family. Other names include Jeevan Reddy, currently MLC and a six-term MLA, who is very acceptable but the party does not think he has the ability to raise resources for elections. Another name is Marri Shashidhar Reddy, for whom the Gandhi family has a soft corner. He is highly respected, is very efficient and can use his knowledge in cornering opponents in debates on crucial issues. But age is a concern for all the three leaders,” the former union minister said.

Besides Jagga Reddy, an also ran, is another serious contender and currenly party working president and MP A. Revanth Reddy, whose it is rumoured is the the favourite of AICC in-charge Manickam Tagore, who revealed he is more than happily gunning for Revanth, when he said, “new TPCC president will be announced in New Year with naya josh.”

“Revanth has charisma, glamour and in popular perception, a strong anti-KCR voice. He has visible attraction among youth, especially the Reddy youth. But he is divisive. Those opposed to him have written to Sonia Gandhi, arguing that his charisma does not translate into votes, visible in the Kondangal Assembly loss to his inability to win many wards in the GHMC polls. Besides, he is not loyal to a party or ideology. He began his career with the RSS and was with the BJYM, besides having been a member of the TRS, the TDP and now Congress. There is also the issue of many serious cases pending against him, conviction in any of which may prove a big liability to the party. Most importantly, several senior leaders, including four out of six MLAs, have point blank told the high command they will leave Congress if Revanth was made TPCC chief.”

In the non-Reddy category, the Dalits have been the backbone of Congress, among which community, are two contenders – Mallu Bhatti Vikramarka and Damodar Raj Narasimha. While Bhatti has held many posts, incuding deputy Assembly speaker, working president and is currently the CLP leader, the fact that 13 MLAs defected to TRS under his watch pins him down. Damodar, who served as deputy CM, is from the numerically influential Madiga community. He is a second generation Congress leader, highly educated and a good orator. But having lost two consecutive elections for MLA makes him weak.

Amongst the OBCs, senior leader Hanumantha Rao has declared himself to be in the fray. But the former TPCC president and MP does not have age on his side. Ponnam Prabhakar is the other OBC leader who fits the bill well, having been an NSUI and YC leader, an articulate speaker and a good organiser. But recent election loses in 2018 and 2019 are going against him.

The last name doing the rounds, more as a consensus candidate to please everyone and displace none to much, is Sridhar Babu, former minister and a four-time MLA. He has a good grip on his district, is efficient, respected for his integrity and character. But being from the Brahmin community is a big liability.

While the high command has purportedly taken a strong view of disapproval over the back biting and washing of dirty linen between rivals, especially sponsored campaigns against each other on social media, the aspirants are pushing on. Revanth Reddy and Bhatti Vikramarka are in Delhi to lobby for the positon directly with Sonia Gandhi.

But in the end, if the high command decides on Jana Reddy, with Nagarjunsagar singularly outweighing all factors, none will be surprised.