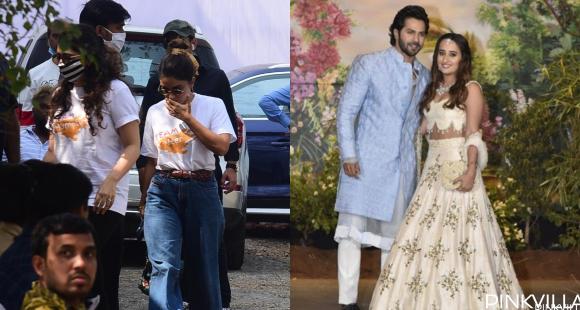 Varun Dhawan and Natasha Dalal are all set to be married today. The couple’s close friends including Zoa Morani were snapped at the venue and their quirky tees will leave you excited.

Actor Varun Dhawan and Natasha Dalal are all set to be husband and wife today at an intimate wedding ceremony. Just moments ago, the couple”s close friends including Karim Morani’s daughter Zoa Morani were snapped with other friends at the venue. What caught our attention was the quirky tees and their captions that Zoa and others had donned. While Zoa was seen sporting a ‘Team Veer’ tee, another friend was seen in ‘Team Humpty’ tee. Zoa had left from Mumbai yesterday via a ferry from Gateway Of India.

In the photos, Zoa is seen clad in a tee that reads, ‘Team Veer’ with a blue jean. She is seen sporting a cool pair of sunglasses while another friend in front of her is seen clad in a ‘Team Humpty’ tee with black pants and a mask. Well, surely it looks like a perfectly organized surprise by the bride and grooms squads to dress in tees that are characters from Varun’s films. While Humpty comes from Humpty Sharma ki Dulhania, Veer comes from Varun’s film, Dilwale. We wonder what other character tees have other friends donned for the wedding celebrations.