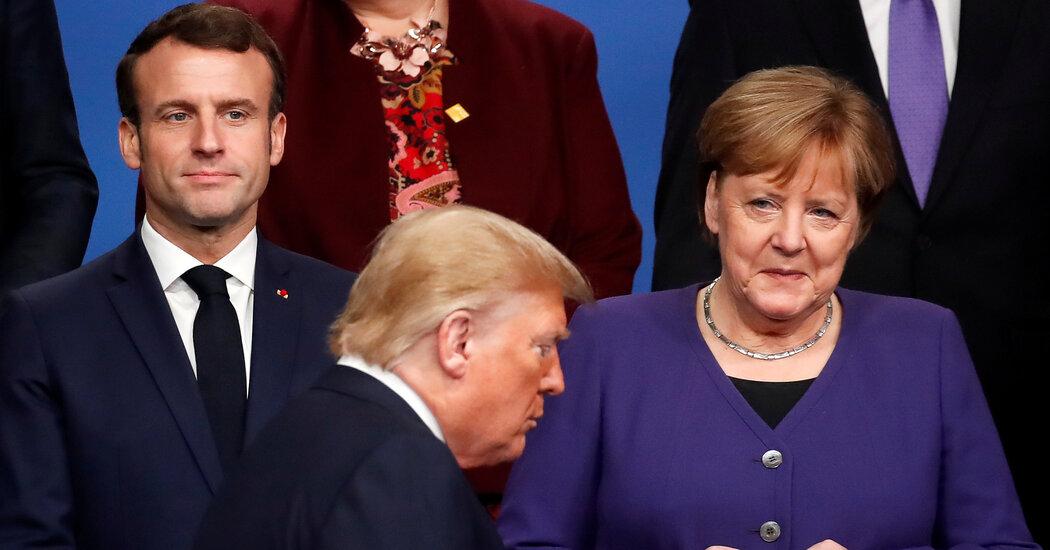 France and Germany tussle over life after Trump

After years of hostility toward Europe, President Trump is leaving. But the prospect of his departure has reopened old fissures between key European allies over their relationships with the United States, with considerable doubts about what just months ago looked like a determined turn toward greater European ambition and integration.

France and Germany in particular are at loggerheads over the future of European defense and strategic autonomy, displaying the different anxieties of two countries central to the functioning of the European Union.

Analysis: NATO and the E.U. are fundamental to Germany in a way they are not to France, which maintains its own nuclear arsenal, explained Jana Puglierin of the European Council on Foreign Relations. “Take them away from Germany and we feel naked,” she said.

Presidential transition: President-elect Joe Biden introduced six members of his national security team, saying that together they would reinstate the U.S. as a global leader countering terrorism, extremism, the climate crisis and nuclear proliferation. “America is back,” he said.

Britons from up to three households will be able to come together and celebrate between Dec. 23 and 27, under plans announced on Tuesday for a brief relaxation of the rules designed to curb the spread of the coronavirus. Normal restrictions will still apply in pubs and restaurants.

The decision, agreed upon by political leaders in England, Scotland, Wales and Northern Ireland, means that people will be able to move freely around the United Kingdom between these dates, regardless of whatever local restrictions are in force. There will be an additional day at both ends for those going to or from Northern Ireland.

Public health experts have warned that lifting restrictions could lead to a resurgence of cases in January and February.

The police violently cleared out a temporary migrant camp in central Paris, forcing people out of tents, chasing them in the streets and firing tear gas. While the police regularly clear such camps, the violent evacuation of mostly Afghan migrants on Monday struck a nerve, fueling growing outrage over the government’s security policies.

The temporary camp, which comprised about 450 blue tents on the Place de la République, was in protest of the authorities’ failure to provide housing for as many as 1,000 migrants who were left to roam the streets after 3,000 people were cleared last week from a camp in Saint-Denis, a suburb north of Paris.

Official remarks: Anne Hidalgo, the mayor of Paris, expressed shock in a letter to the French interior minister, accusing the police of a “brutal and disproportionate use of force.” It came as Parliament voted on a bill on Tuesday that would make it harder for reporters or bystanders to film instances of police brutality.

If you have 9 minutes, this is worth it

The coronavirus pandemic has complicated a rite of passage for Korean adoptees who were brought up overseas: reuniting with their birth parents. Many adoptees canceled long-planned pilgrimages back to South Korea after the government’s quarantine rules for foreign visitors made the trips too costly and time-consuming.

Some, like Mallory Guy, second from left in the photo above, still found a way to make the trip. The Times spoke to adoptees and birth parents about pandemic-era homecomings.

Shamima Begum: Lawyers representing the former London schoolgirl who went to Syria in 2015 to join the Islamic State called on Britain’s Supreme Court to let her return to her home country to mount her defense. The court should not assume she poses a serious threat, they said on Tuesday.

Curbing “period poverty”: In a world first, the Scottish Parliament voted unanimously to make sanitary products available to anyone who needs them, introducing a legal right of free access to tampons and sanitary pads in schools, colleges, universities and all other public buildings.

Uighurs in China: Pope Francis calls the ethnic group a “persecuted” people in his upcoming book. Chinese officials swiftly denied it, despite a wealth of evidence of Beijing’s crackdown on the Muslim minority group.

Snapshot: Above, a third-floor corridor at the Vilina Vlas hotel in Visegrad, Bosnia and Herzegovina. The forest health resort promotes its therapeutic waters and fine dining, but staff members bristle with anger at any mention of its gruesome past, when it was a rape and murder camp run by a gang of Serb nationalists during the Balkan wars of the early 1990s.

Lives lived: Lady Elizabeth Anson, an indefatigable party planner to “the very rich, the very idle, the very busy and the ones who simply haven’t a clue what to do,” as she put it, including rock stars and royals, died earlier this month at 79.

What we’re reading: The Economist’s package of articles explaining the power competition between China and the U.S. — and making a case for how the Biden administration should approach it. “It’s an excellent overview of one of the world’s most important stories,” says David Leonhardt, who writes The Morning.

Let us help you discover something new. At Home has ideas on what to read, cook, watch and do while staying safe at home.

Preliminary analysis of the vaccine produced by the British-Swedish drugmaker and the University of Oxford showed it was 90 percent effective when the first dose was cut in half. In contrast, the combination of two full-dose shots led to just 62 percent efficacy. Our science reporters explain what’s behind those head-scratching results.

Why would that combination be more effective?

No one knows. The researchers speculated that the lower first dose did a better job of mimicking the experience of an infection, promoting a stronger immune response. But other factors, like the size and makeup of the groups that got different doses, may also be at play.

Why did the researchers test two different doses?

It was a lucky mistake. Researchers in Britain had been meaning to give volunteers the initial dose at full strength, but they made a miscalculation and accidentally gave it at half strength, Reuters reported. After discovering the error, the researchers gave each affected participant the full-strength booster shot as planned about a month later.

Fewer than 2,800 volunteers got the half-strength initial dose, out of the more than 23,000 participants whose results were reported on Monday. That’s a pretty small number of participants on which to base the spectacular efficacy results — far fewer than in Pfizer’s and Moderna’s trials.

That’s it for this briefing. Join me tomorrow for more news.

Thank you
Theodore Kim and Jahaan Singh provided the break from the news. You can reach Natasha and the team at [email protected]

P.S.
• We’re listening to “The Daily.” Our latest episode is about President Trump’s failed attempt to overturn the election.
• Here’s our Mini Crossword, and a clue: Things made obsolete by iPods (three letters). You can find all our puzzles here.
• We asked an A.I. system to have a go at writing a Modern Love column. It wrote dozens; like all romances, some turned out better than others.
• Our Beijing reporter Sui-Lee Wee spoke to Nieman Storyboard about the challenges of sourcing and reporting in China.