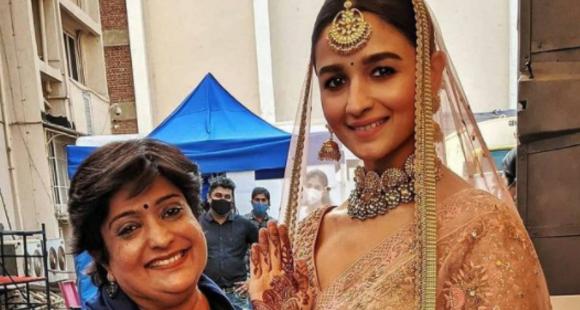 Celebrity Mehendi artist Veena Nagda took to social media to drop a gorgeous photo of Alia Bhatt dressed as a bride from the sets of a shoot. The photo quickly went viral as fans can’t wait to see her as a real bride at her wedding with Ranbir Kapoor.

Alia Bhatt’s exquisite bridal look from a shoot takes the internet by storm; Has Ranbir Kapoor seen it yet?

Actress Alia Bhatt always manages to light up the internet with her stylish looks. However, this time, a photo of the Gully Boy star in a bridal look has taken the internet by storm and well, netizens have been wondering if her beau Ranbir Kapoor has seen the gorgeous look yet. The photo was shared on social media by Celebrity Mehendi Artist Veena Nagda, who recently was in the news owing to Varun Dhawan and Natasha Dalal”s wedding in Alibaug.

Taking to her Instagram handle, Veena shared a photo of the gorgeous Alia decked up in a bridal avatar. She did the Mehendi for Alia and is seen posing next to the star. In the photo, Alia is seen clad in a pale pink embellished lehenga. She is seen sporting a beautiful maang tikka with a choker necklace and jhumki earrings. As Alia smiled, she flaunted her beautiful mehendi and looked absolutely gorgeous while posing next to the celebrity mehendi artist.

Alia was apparently shooting for an ad and as soon as the photo hit social media, it went viral. Several fans were stoked to see Alia in a pretty pink avatar as a bride. However, many could not wait to see her as a real bride in her wedding with beau Ranbir.

Take a look at the photo:

Meanwhile, recently, Alia sent the internet into a frenzy when she adorably declared her love for ‘8’ aka Ranbir in an ‘Ask Me Anything’ session on Instagram. Back in January, Ranbir too had spoken to Rajeev Masand in a chat about his wedding. He had shared that had the pandemic not occurred, he would have been married. He said that he is looking to tick mark the marriage goal soon in the chat. Recently, Ranbir also gave a few items from his closet for Alia’s charity and left everyone in awe of their bond. On the work front, the couple will be seen together in Brahmastra. The film is helmed by Ayan Mukerji and produced by Karan Johar.

Also Read| For Alia Bhatt, boyfriend Ranbir Kapoor is all set to share his wardrobe & his kind gesture is winning hearts