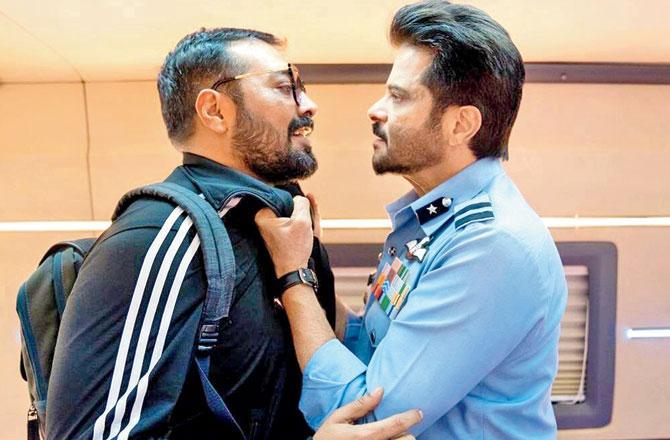 If Anil Kapoor had his way, he would have joined forces with Anurag Kashyap in the early 2000s. But the universe had its own plan — his wish has been fulfilled this year as they share screen space in Netflix’s black comedy, AK vs AK that sees the actor and the filmmaker play themselves. The Vikramaditya Motwane-directed film has Kapoor in desperate search of daughter Sonam after Kashyap abducts her.

In the mockumentary’s trailer, Kapoor is seen asking Kashyap to make a film with him. Ask the actor if he has ever reached out to a filmmaker for work, and he says, “I am a hungry actor. There have been times when I have told a director that I want to work with him, and he has misunderstood it, thinking, ‘Iska time kharab chal raha hai. Iss liye kaam maang raha hai.’ I have smiled through such situations, knowing that my call fed his ego. On other occasions, if a filmmaker is new, he may not know how to approach a star. In such cases, one can break the ice by approaching him. Either way, I don’t have an ego. If I find a good director, I will go up to him.”

In a classic case of art imitating life, the senior actor shares that he had, in fact, reached out to Kashyap during the latter’s early days. “I had the honour of giving the mahurat clap for Paanch. As soon as I saw the rushes, I shamelessly approached Anurag, and told him that I want to do a film with him. He wrote not one, but two films for me — Allwyn Kalicharan and Grand Hotel. Unfortunately, neither of the movies was made. Then, I pursued him to write the dialogues for Nayak [2003].”

Kapoor, who has spent close to four decades in the industry, appears to be enjoying his current creative phase as he balances a mainstream Race 3 with the experimental AK vs AK. “[In my younger days] when I would pick an out-of-the-box project, mainstream filmmakers used to get upset, saying, ‘Arre, yeh phir art film kar raha hai.’ I used to compromise on mainstream films for movies that would challenge me.”