Marino was ranked 38 a decade ago before retiring in 2013 due to depression, which was compounded by cruel attacks on social media. 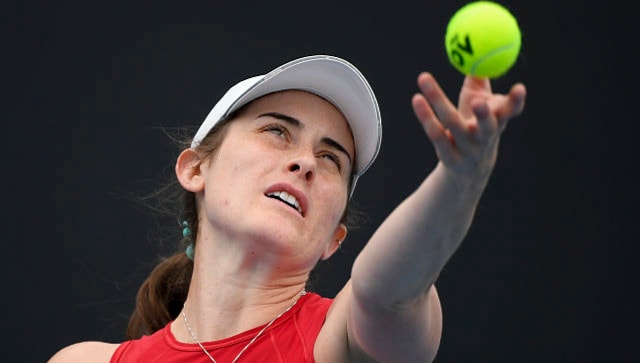 Rebecca Marino serves to Kimberly Birrell during their first round match at the Australian Open. AP Photo

Melbourne: A proud Rebecca Marino hoped her Grand Slam comeback had provided “inspiration” after the Canadian’s return to the big stage ended on Wednesday at the Australian Open.

Playing her first Slam in eight years, the Canadian fell to Marketa Vondrousova of the Czech Republic 6-1, 7-5 in the second round, but merely making it to Melbourne Park struck a chord for many.

Marino was ranked 38 a decade ago before retiring in 2013 due to depression, which was compounded by cruel attacks on social media.

During retirement, she studied English literature and took up rowing before getting the itch to play tennis again.

The World No 315 returned to the tour in 2017 but it was a long slog before qualifying for this year’s Australian Open, where she beat Australian Kimberly Birrell in straight sets in the first round.

“I’m proud how far I’ve come and excited to see how I can push things in the future,” she said.

“Knowing I can go toe-to-toe with a player of her (Vondrousova) calibre is big.

The 30-year-old’s success in Melbourne has roused excitement many miles away.

“I’ve tried to stay away from social media but I’m aware that there is a little buzz back home,” she said.

“If I can provide inspiration for some people then that’s amazing.”

Marino vowed not to “rest on her laurels”.

“It’s been quite the journey starting from scratch but I want to learn from the experience and stay rooted in the present,” she said.

Vondrousova next plays Romania’s Sorana Cirstea, who upset ninth seed Petra Kvitova in the second round.