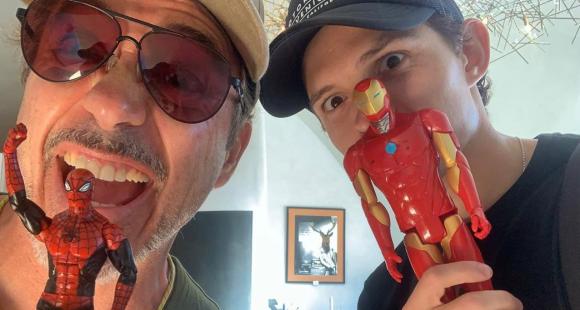 Tom Holland is currently filming for Spider-Man 3 in Atlanta. While fans cannot wait to see him in action, a rumour is doing the rounds claiming Robert Downey Jr has helped Holland with cracking a good deal for Spider-Man 3.

Tom Holland is currently filming for Spider-Man 3. The actor dons the suit for the third time in the franchise and sixth time overall. While fans are eager to see what Holland has in store for Marvel Cinematic Universe fans, a new report claims that Holland might have worked up a better financial deal with some help from his on-screen and off-screen mentor Robert Downey Jr. It is no secret that the Iron Man actor made some great financial deals with Marvel Studios which resulted in a whopping pay for his swansong in MCU.

Now, it is said that he helped Holland to crack a good deal as well. Via We Got This Covered, Marvel insider Daniel Richtman claims Downey Jr assisted Holland in “securing better financial terms” to continue essaying the role of Spider-Man in the upcoming Spider-Man movie. The report states that Holland”s deal was apparently for three solo Spider-Man movies and three guest appearances in other MCU projects. While he has fulfilled his deal, We Got This Covered reported that Holland is “probably looking at least $10 million per film from here on out.”

While it is to see if these rumours are true, Holland is working hard on his third solo Spider-Man movie. The actor has been sharing videos and photos from the sets to reveal he is busy with the shoot. However, he has successfully managed to not leak spoilers on social media (yet). Apart from the Marvel Cinematic Universe, Holland has a number of projects in the pipeline. This includes Cherry with the Russo Brothers and Uncharted. Stay tuned to Pinkvilla for more updates.