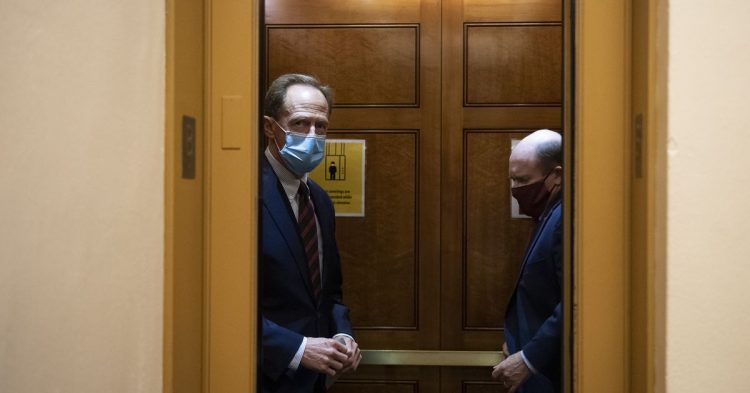 Lawmakers are signaling tentative optimism about passing a nearly $900 billion coronavirus stimulus package, as well as a bill that would fund the government, on Sunday after senators came to a “tentative” agreement over a dispute about federal lending powers late Saturday night.

Still, they’re working against the clock: a deal, or a temporary funding extension, must be passed by midnight on Sunday — otherwise the government will have no money to function, and will be forced to shut down.

Stimulus talks, which have been stalled for months, appeared to be nearing a resolution at the end of last week, but ultimately got caught up on a question about emergency lending programs within the Federal Reserve.

Republicans, led by Sen. Pat Toomey (R-PA), wanted to permanently end economic support programs enacted at the central bank during the outset of the pandemic, citing concerns that the programs distort the Fed’s role in the financial system. Democrats argued that the GOP’s true concern was that the programs would allow President-elect Joe Biden to enact stimulus measures Republicans are opposed to, independent of Congress.

At just about midnight on Sunday, Democrats reportedly agreed to allow those programs to be shelved, and promised the final legislation would include language barring the Fed from re-creating some of them down the line without first consulting Congress.

However, the Fed would retain control over a narrow set of programs, and would be able to restart these without congressional approval. The Fed will also have to return unspent money it got from the Treasury Department as part of the first stimulus package in March — something it had previously agreed to do.

A spokesperson for Toomey called it a “tentative” agreement, but leaders have signaled that this could clear the path for a vote on Sunday.

The dispute over the Fed followed — and, as Vox’s Emily Stewart has explained, was related to — a battle over whether aid to state and local governments would be included in the stimulus package. Democrats have argued for months that this aid is badly needed by local governments that were forced to overspend to procure coronavirus supplies while facing depressed tax revenues, but Republicans have opposed it.

Republicans, meanwhile, maintained that any stimulus would need to include liability protections, shielding businesses from coronavirus-related lawsuits. Democrats were staunchly against this.

Eventually, both sides chose to exclude these contentious proposals. But, as Stewart explained, some Republicans were concerned state and local aid could flow from the Fed through its emergency lending programs. After Saturday night’s deal, that is no longer a possibility.

The final text of the bill is not available to the public, and has not yet been made available to lawmakers, so it remains to be seen exactly how the new constraints on the Fed will work. But now that there’s an agreement to move forward in talks, lawmakers are one step closer to passing relief before the shutdown deadline — and before unemployment benefits are set to expire for millions of Americans on Monday.

Shortly before midnight on Saturday, Senate Minority Leader Chuck Schumer (D-NY) said congressional lawmakers are likely to vote on the bills on Sunday.

“If things continue on this path, and nothing gets in the way, we’ll be able to vote tomorrow,” he told reporters. “House and Senate.”

What the stimulus bill does — and doesn’t — include

Lawmakers have been debating a set of bills since they were introduced by a bipartisan group of senators on Monday. The package initially consisted of a $748 billion bill, which contains funding for 16 weeks of enhanced unemployment insurance, and a $160 billion bill, which includes money for state and local aid, as well as liability protections for businesses.

That second bill is off the table for now. And after negotiations, including debate over the amount of direct payments to Americans, the final package is now expected to be worth $900 billion.

However, it is not guaranteed the new bill will pass — more sticking points could emerge, and details remain to be worked out. President Donald Trump has now signaled a willingness to sign Congress’ final product, however, tweeting early Sunday morning, “GET IT DONE”.

Why isn’t Congress giving our people a Stimulus Bill? It wasn’t their fault, it was the fault of China. GET IT DONE, and give them more money in direct payments.

Overall, the aid package is expected to include new funding for unemployment, food and rental assistance for Americans, business relief, and vaccine distribution funds. It will also include another round of stimulus checks — although at a number far lower than the first round of $1,200 checks sent out in the spring.

Going into a final day of talks on Sunday, some aspects of the bill are relatively finalized. There will be support for small businesses, schools, and other institutions. For example, $300 billion would be added to the Paycheck Protection Program (PPP), intended to supplement wages lost by employees of small businesses, and $82 billion would go toward education, with an additional $10 billion for child care.

As millions of Americans experience housing insecurity, struggling to make rent payments and potentially facing eviction, the package could also include up to $25 billion in rent and utilities support, and also extend a broad moratorium on most evictions through January 31, 2021. There are also several billion dollars guaranteed for vaccine distribution.

A provision to expand federal unemployment insurance will also be included. As of Sunday morning, it seems likely that unemployed workers will be eligible for $300 per week. The unemployment support could last for 10 to 16 payments, but payments would not be made retroactively.

There will also be one-time payments to all Americans beneath a certain income level; those payments will reportedly be in the $600 to $700 range, although the details have yet to be finalized.

There isn’t a lot of distance between the two parties at the moment, and there is intense time pressure to finally get something done, not only because of the pressing need of many Americans, but to avoid a costly government shutdown.

The main thing left to decide is how much the individual relief checks for Americans should be. Some lawmakers have argued they need to be higher. Sens. Bernie Sanders (I-VT) and Josh Hawley (R-MO) said as much when they pushed for the checks to be worth $1,200, and to include an additional $500 for children. Their attempts to force the issue failed after resistance from Sen. Ron Johnson (R-WI).

Seventeen House Democrats joined the call for higher payments. Trump reportedly supports them as well; according to the Washington Post, the president planned to push for checks of up to $2,000 per person, until aides dissuaded him from this notion. Republicans have largely been against increasing these checks, or the weekly amount of unemployment insurance, in order to keep the cost of the bill below $1 trillion.

There could also be some last-minute additions of other, unrelated, proposals — for instance, Sen. Lisa Murkowski (R-AK) reportedly hopes to work in language on energy policy — but these additions are largely ones on which there is already bipartisan agreement, and seem unlikely to derail talks to the degree the Fed issue did.

House leaders have said they hope to have a bill up for a vote by Sunday afternoon. Should final negotiations go smoothly, they have said that vote could come as soon as 1 pm ET. A vote in the Senate would follow.