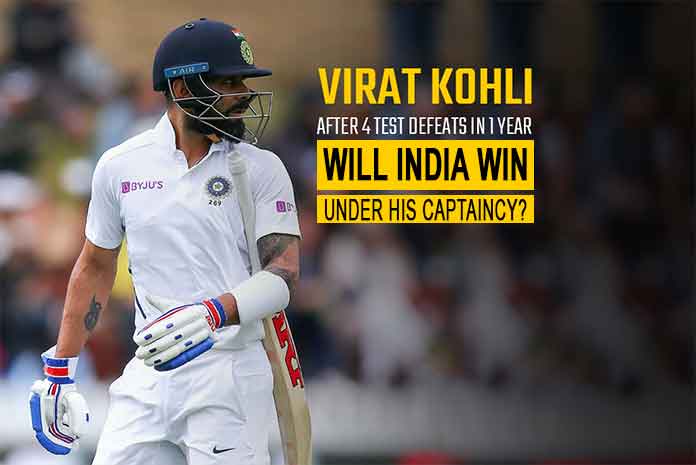 India vs England 2nd Test – Biggest Test for Virat Kohli’s Captaincy:  After facing a surprise 227-run defeat in the opening Test of the four-match series against England Virat Kohli’s captaincy is under threat. King Kohli is now on a 4 match losing streak while captaining India. Can he turn the tide and stop the losing streak of 4 consecutive defeats under his captaincy.

Virat Kohli’s 4 Match Losing Streak under his captaincy: It started with defeats in two consecutive test matches against the New Zealand in Feb 2020, continued with humiliating loss against Australia in Adelaide, when under Kohli – India was shot our for their lowest ever test score of 36 – and then the defeat at home against the England side.

“There are moments when you don’t have that energy but that doesn’t mean that it has happened because of a change in captaincy. As I have said earlier, Virat is our captain and will remain our captain”, said Ajinkya Rahane defending his captain Virat Kohli.

Can Kohli and India make a turnaround? India made a historic turnaround in Australia and Virat Kohli and company will eye another comeback in the series after losing the series opener. India’s batting line-up failed in the first Test and that was the biggest reason for the hosts’ defeat at the MA Chidambaram Stadium on Tuesday. Openers Shubman Gill and Rohit Sharma need to step-up for the side to provide a solid foundation while Chesteshwar Pujara, Ajinkya Rahane and Virat Kohli will look to convert their starts into big innings.

On the other hand, Indian bowlers will look to find a solution for English batters in the second Test. Jasprit Bumrah and Ishant Sharma will try to get back in rhythm while Ashwin will look to continue his dominance on the spinning track.

India may try Kuldeep Yadav or Axar Patel in the second game as Shahbaz Nadeem struggled with his bowling run-up and bowled nine no-balls in the first Test.
Patel has recovered completely and is now available for selection. The all-rounder had complained of pain in his left knee and was ruled out of the first Test.

England skipper Joe Root is in great form and Indian bowlers need to come up with a fresh approach against him in the series. Dom Sibley, Ben Stokes and Ollie Pope are also not easy wickets to send back to the pavilion.

For England, Ben Foakes is set to take over wicketkeeping duties from Jos Buttler who ended his India tour after the first Test.

Jofra Archer will miss the second Test after having an injection in his right elbow.
The series will decide which team will meet New Zealand in the World Test Championship final at Lord’s in June.

World Test Championship Race: England jumped to first place with 70.2 winning on the points table and they’ve improved their chances of securing one of the three series results in their favour that could see them through to the final — 3-1, 3-0 or 4-0.

India slipped to fourth in the WTC rankings after the loss. Australia are third. India needs to win by at least 2-1 margin to make it to the finals of WTC.

The second Test of the series will be played at the MA Chidambaram Stadium in Chennai with 50 per cent spectators on Saturday.