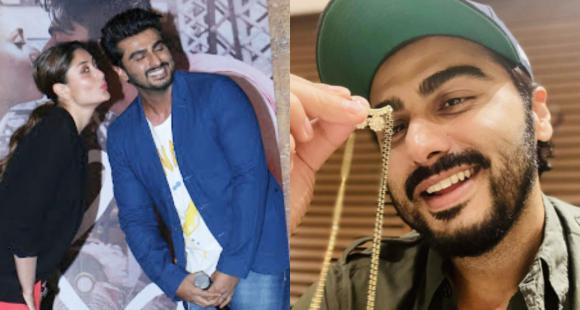 Arjun Kapoor and Kareena Kapoor Khan starrer Ki & Ka completed 5 years today. The R Balki directorial brought together Arjun and Kareena and today, they both remembered special memories related to it. The actors also shared why they want a sequel to the film.

Arjun Kapoor and Kareena Kapoor Khan began their Thursday by taking a walk down memory lane as their film, Ki & Ka completed 5 years. The R Balki directorial released 5 years ago on April 1 and managed to challenge many gender stereotypes. Kareena and Arjun essayed the lead roles in the romantic-comedy that managed to leave fans impressed. As the film clocked 5 years, Kareena revealed how her son Taimur Ali Khan was connected with the film and Arjun shared his memories related to the film.

Taking to her Instagram handle, Kareena shared a photo with her makeup artist Pompy and Arjun and recalled how the film was extremely special for her. She shared that her son Taimur was “conceived’ after the film was shot and that the only reason she would want a sequel to the film is to have a chance to work with Arjun and R Balki again. Arjun, on the other hand, shared a selfie with the only memorabilia he kept from the film, a mangalsutra. He poked fun and shared that he would want a sequel to the film. Further, Arjun also shared that he originally took on the role for his late mom.

Sharing her thoughts with a photo, Kareena wrote, “A film I thoroughly enjoyed, a film quite bold, a film after which Tim was conceived, a film that must be made into a sequel… only cause I want to work with @arjunkapoor and Balki once again… Arjun don’t worry, I will continue to say chappal laooooo.” On this Arjun commented, “The Chappal is key !!!” On the other hand, Arjun also shared his thoughts as he flaunted the ‘mangalsutra’ from the film. He wrote, “A piece of memorabilia from ki & ka !!! Missing the set and missing the on screen Ki… this film was personal as I chose it for my mom and it’s now even more personal after working with Bebo and Balki sir… I think we need a sequel what say @kareenakapoorkhan ?.”

Meanwhile, Arjun and Kareena’s act in the film impressed fans and the unique concept of the film left fans in awe. The duo’s chemistry also was adored in the R Balki’s directorial. Currently, Arjun is working on Bhoot Police. He will be seen in the film with Saif Ali Khan, Jacqueline Fernandez and Yami Gautam. On the other hand, Kareena will be seen in Laal Singh Chaddha with Aamir Khan. The film will release on Christmas 2021.

Also Read|Kareena Kapoor Khan’s iconic PHAT dialogue from K3G gets a unique twist, all thanks to Priyanka Chopra; WATCH