Not Kriti Sanon, Kiara Advani to star with Hrithik Roshan in Krrish 4? 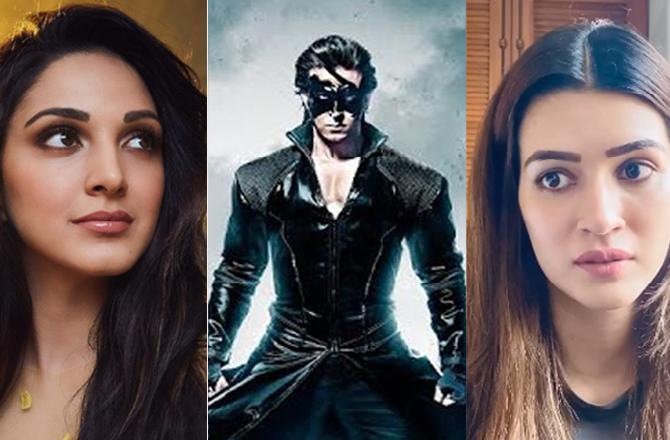 The first film of the Superhero franchise that was started by Rakesh Roshan and Hrithik Roshan was Koi… Mil Gaya in 2003, where the leading lady was Preity Zinta. Three years later, we got Hindi Cinema’s maiden Superhero in the form of Krrish with Priyanka Chopra by his side, continuing her rock-solid support in Krrish 3 in 2013.

As far as Krrish 4 is concerned, it was reported a few months back that Kriti Sanon would be the leading lady opposite the actor this time but now a report by Bollywood Hungama states that it’s not Sanon but Kiara Advani who seems to be the choice of the makers. The report adds that it was the schedule of the Heropanti actress that didn’t allow her to come on board for the drama.

A source told the portal, “Kiara Advani is the one they are looking out to cast in Krrish 4. There are two heroines in the film and while Kriti Sanon was in contention for the main role, her date diary was completely blocked with as many as five films she had already signed up.”

Also Read: Hrithik Roshan On Krrish 4: We Have Started Brainstorming And Have Begun Work On The Film

It added, “Kiara was the obvious choice because she’s not only pretty but also a really good performer. Plus, her on screen pairing with Hrithik will be fresh. Currently, the Roshans are discussing the modalities with Kiara and then take the final call.”

A source close to Sanon revealed that the actress is currently super busy reading scripts and has as many as 7 ventures being offered to her. The source added, “Kriti is keeping really busy with the shoot of her next film in Chandigarh. After breaking new grounds with films like Bareilly Ki Barfi, Luka Chuppi and Housefull 4, she has in no time become a director’s favourite and has been offered some really exciting projects. Post staying at home all these months due to the pandemic, she’s all set to roll with around 5 projects slated in 2021.”

If the lockdown hadn’t happened, Kiara Advani was supposed to have Laxmii on May 22, Indoo Ki Jawaani on June 5, Shershaah with Sidharth Malhotra on July 3, and Bhool Bhulaiyaa 2 with Kartik Aaryan on July 31. Due to the lockdown, all the films had a change in the releases. She also has Jug Jugg Jeeyo with Varun Dhawan, Anil Kapoor, and Neetu Kapoor.

The actress also has a film coming up with filmmaker Ashutosh Gowariker. How does a small cottage industry, started with a capital of Rs 80, grow into a multi-crore business in six decades? While MBA students will find a valuable business management lesson there, the Lijjat Papad success story offers bigger learning – that of self-reliance and women empowerment.

This is the theme the film deals with. Gowariker, who has a knack for bringing classic homegrown stories to the big screen, has placed his bet on the real-life narrative of how the Shri Mahila Griha Udyog Organisation came into being. Headlined by Advani, the film – tentatively titled Karram Kurram – will narrate the journey of a woman who brought together six other homemakers to create a source of income by making papads.

A source says, “Kiara was the first choice for the project. She is the perfect combination of softness and quiet strength, required to pull off the part of a middle-class woman with a fighting spirit. She signed the film before flying off to Chandigarh for the Jug Jugg Jeeyo shoot.” The movie, to be shot in Mumbai, is expected to go on floors by August-end 2021.

Coming to Hrithik Roshan, almost eight months after he signed on American talent management company Gersh Agency to represent him internationally, Roshan is working towards making Hollywood his next stop. It is heard that the actor, who is in talks to play the parallel lead of a spy in a Hollywood action thriller, recently recorded his audition. The multi-million dollar film is backed by a reputed production house, but details regarding the director and the story are being kept under wraps.

Though auditions usually take place at the studios in the US, Roshan taped his scene at his Juhu home, given the pandemic. “As is customary in Los Angeles, Hrithik’s team was given details of his role in the movie and the scenes that he had to tape. He sent his audition to the studio two weeks ago. The discussion is at a nascent stage. If all goes well, the actor will kick off the project after completing the shoot of Krrish 4,” reveals a source.