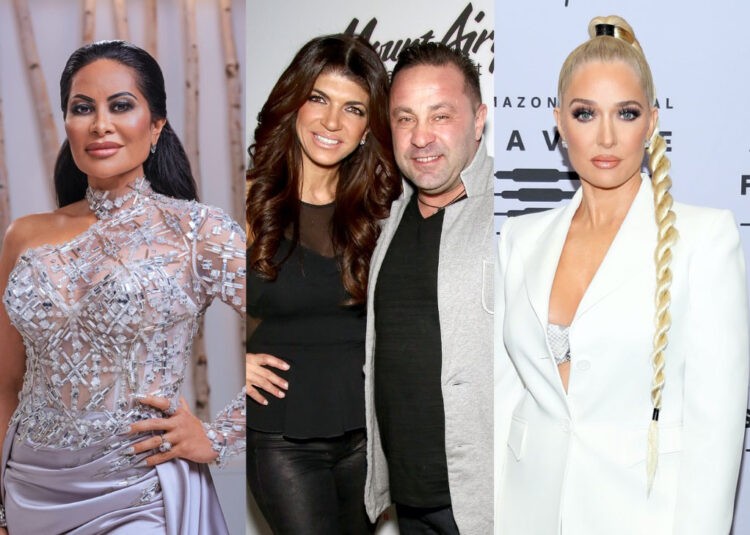 Housewives are no stranger to drama on and off-screen. But Jen Shah is the latest star from the Bravo franchise to face legal repercussions for her alleged actions.

On Tuesday, the Real Housewives of Salt Lake City star was arrested as she’s accused of running a nationwide telemarketing scheme with her assistant. Many of the alleged victims were over the age of 55. She was charged with conspiracy to commit wire fraud in connection with telemarketing and conspiracy to commit money laundering. Shah faces up to 50 years in prison if convicted on both charges. She certainly wouldn’t be the first Housewife (or househusband) to trade in couture for a jumpsuit.

Here are the biggest legal scandals to rock the franchise.

The Real Housewives of New Jersey stars were indicted on fraud and tax charges in 2013. They also lied under oath about Joe’s failure to file tax returns. The couple ultimately pleaded guilty to several counts of loan and bankruptcy fraud. Teresa was sentenced to 15 months in prison while Joe was sentenced to three-and-a-half years. Upon his release in 2019, Joe was immediately transported to ICE custody while he appealed his deportation order. (Joe never obtained American citizenship despite living in the U.S. since he was a child.) He decided to go back to Italy.

It wasn’t a very merry Christmas Eve for the Real Housewives of New York City star. De Lesseps was arrested in 2017 and accused of disorderly intoxication, resisting arrest and battery on a law enforcement officer while out in Palm Beach, Fla. She avoided jail time by pleading guilty to three charges: battery, disorderly intoxication and trespass in an occupied structure or conveyance.

The Real Housewives of Beverly Hills star, who goes by Erika Jayne professionally, surprised fans when she filed for divorce from her husband of 21 years. But the backstory seems to be much more complicated. The famed 81-year-old attorney is accused of stealing millions of dollars from clients, including embezzling settlement funds for families of Lion Air Flight 610 victims, in part to fund his wife’s lavish lifestyle. (The Boeing crash killed 189 people in 2018.) The complaint alleged the divorce “is simply a sham attempt to fraudulently protect Tom’s and Erika’s money from those that seek to collect on debts owed by Tom” and his firm, Girardi Keese. This will reportedly be a big storyline on the upcoming 11th season of RHOBH.

The restauranteurs have been hit with multiple class action lawsuits for allegedly not paying employees at SUR, Tom Tom and Pump. According to docs filed, the Real Housewives of Beverly Hills alum and her husband allegedly manipulated employees’s time cards “to show lesser hours than actually worked” and permitted “employees to work off the clock.” The papers claim that employees “routinely working over eight hours per day, 40 hours per week and seven consecutive days in a work week” and were not “properly compensated” for overtime.

The Real Housewives of Potomac stars pressed charges against each other after an altercation occurred while filming the fifth season in 2019. Each star accused the other of second-degree assault and faced jail time if convicted. The Montgomery County State’s Attorney’s Office ultimately decided not to pursue their cross complaints and charges were dismissed. Samuels announced she would not return for Season 6.

Krupa, of Real Housewives of Miami fame, sued the former Real Housewives of Beverly Hills star for slander in January 2015. It all stemmed from a 2013 appearance on Watch What Happens Live where Glanville alleged Krupa’s vagina “smelled.” The years-long feud between the women ended in 2017 when they reached a confidential settlement. Glanville had to issue a public apology.

Nida was sentenced to eight years in prison for fraud and identity theft in 2014 — and the drama was captured on The Real Housewives of Atlanta. Parks maintained she had no idea her husband was running a criminal enterprise and was not charged. Parks filed for divorce.