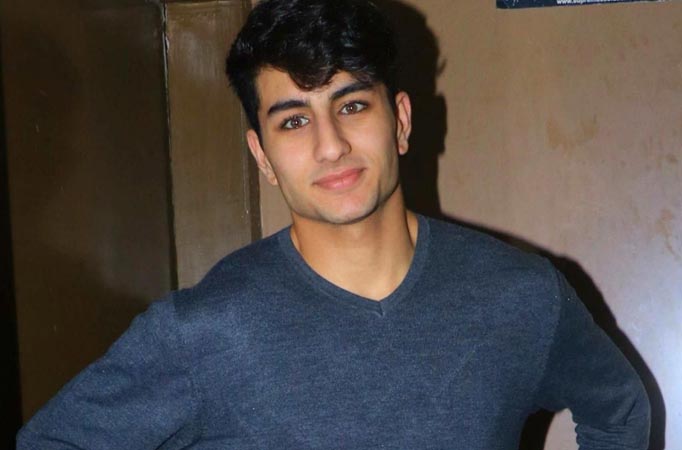 MUMBAI: Saif Ali Khan and Amrita Singh’s son Ibrahim Ali Khan have set the internet abuzz with his latest photos. One of the most popular and sought-after star kids in B-town, Ibrahim’s recent pictures, that are apparently part of a photoshoot the young star kid indulged in for noted designers Abu Jani Sandeep Khosla, scream royalty.

An aspiring actor, Ibrahim sure seems like he is doing a wonderful job posing as model for the designers. His spectacular images have female fans going week in the knees as he is showered with positive comments on the post.

In the first monochrome photo shared by the designer duo on their Instagram handle, Ibrahim can be seen making a style statement in an off-white khadi silk sherwani with a shirt collar that featured intricate mesh of crystals, zardozi and resham hand-embroideries. He was seen looking away from the camera as he posed for the click.

In the second picture, Ibrahim looked majestic and regal in a grey linen Bakhiya kurta embroidered with off-white resham chikankari.

Meanwhile, Ibrahim’s aunt Saba Pataudi too shared some photos of the star kid on her social media handle. “A STAR IS BORN. You make me proud! The man you’ve become speaks volumes of WHO U truly R. Stay safe. Love you (sic),” she captioned her first the post, which is the same image that designer duo Abu Jani Sandeep Khosla shared on their social media handle.

However, Saba did share a few unseen images from Ibrahim’s photoshoot.

“STANDING TALL. Ive seen the baby, the young boy, the youthful teen and now mahshallah a grown man. I’m an aunt bursting with pride. You’re a success story who’s made it on his own. Wishing you life’s very best. Love you,” she wrote alongside an image of Ibrahim in which he can be seen donning a black bandhgala embellished with silver oxidised accessories. What is striking in the photo is Ibrahim’s kohl-eyes that will make you want to keep looking at them as much as you would want to look away.

In yet another photo Saba shared, Ibrahim is seen showing off his fun side. “STYLE ICON. #God bless#the#many#facets#of #ibrahimalikhan (sic),” Saba captioned the picture.

Take a look at the pictures here:

Earlier, confirming that his son will be following his footsteps to join the Hindi Film industry, Saif Ali Khan has opened up about Ibrahim’s Bollywood debut.

Saif told SpotboyE in an exclusive interaction, “Ibrahim seems prepared for a career in acting. And why not? I’d like all my children to be in this profession. It is the best place to work in. I remember at 17-18 I was a mess. Acting saved me from self-destruction. Having the job, the sense of identity it has given me job satisfaction. Also, the enjoyment it has given me is more than I could ask for.”

Before this, in an earlier interview, Saif had said that the only advice he would want to give his son if he pursues a career in films is that he should be well-prepared. Saif had said, “It’s a different universe now, with different benchmarks. I would tell him to be well prepared and choose his films carefully.”

Speaking about Ibrahim’s future in Bollywood, Saif had said, “He should (join Bollywood as an actor), he’s looking good, better looking than I am! He’s a very charming guy. I definitely think all of my children would be interested in acting. We’re an acting family, the whole bunch of us are in the industry. So I’m sure. He’s still a little young, and I’m keener that he does university first. Then, of course, we’ll support him in whatever he wants to do.”