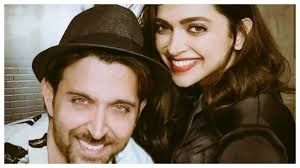 For a few years now, Bollywood fans have been wishing to see Hrithik Roshan and Deepika Padukone share the screen and it looks like that desire will finally turn into reality as the two are expected to feature in Madhu Mantena’s interpretation of the epic Ramayana which is all set to start filming shortly. While the leads are yet to be finalized, it seems like the two are frontrunners in the race for securing the roles of Ram and Sita.

A report in a leading daily also revealed that the film will be shot in 3D and has an approximate budget of Rs. 300 crore. The mega project will be held by Nitesh Tiwari, who has already proved his calibre with films like Dangal and Chhichhore. Mantena is keen to portray every single element of the epic and is even considering releasing it as two full-length feature films. A source close to the project revealed, “These are sensitive times. And the last thing the Ramayan needs is an underwhelming treatment or a revisionist screenplay. Mantena has deployed several researchers to project absolute accuracy and preserve complete sanctity in his film version of the venerated epic.”

Even though we haven’t heard any official confirmation regarding the details of the film, if these rumours are to be believed, it sure is shaping up to be an exciting project.

Are Hrithik Roshan and Deepika Padukone going to play Ram and Sita in an upcoming movie?