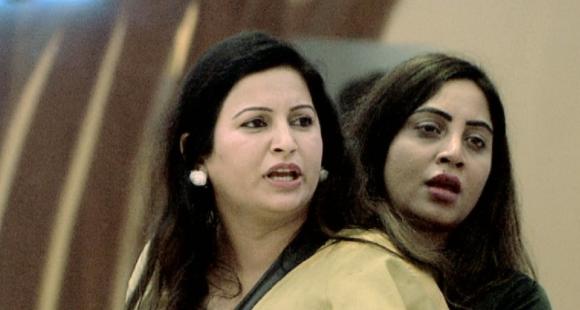 Bigg Boss 14’s latest episode was quite an intense one as the housemates fought over a lot of issues. Read on to know more.

12.45 pm: Aly indulges in fun banter with Sonali Phogat. However, she seems angry and is asked the reason behind the same. Aly, Arshi, and Rakhi get into a fight over the same. In the midst of all this, Arshi asks her about Riteish. Rakhi then alleges that Aly’s love is fake and not hers.

1.30 pm: Aly asks Rakhi why she is staring at him. She then states he gave a good performance on Jasmin’s exit.

3.45 pm: The captaincy nominees are given a task that involves flying kites. The one who’s kite remains intact wins the task and becomes the captain.

4.00 pm: Rakhi, Nikki, Abhinav, and Rubina strategize about the task. Meanwhile, Aly and Rahul have a separate discussion.

4.15 pm: Chaos ensues at the beginning of the task and the housemates not only break a table but also end up breaking all the threads.

4.30 pm: Arshi asks Rubina the reason behind sacrificing herself for Nikki and taunts her. However, Abhinav replies for her, and all of them are left in splits. In the midst of all this, Rubina and Rahul get into a fight. She also taunts him for leaving the show earlier.

4.45 pm: Rubina and Abhinav have a discussion about Rahul. The latter tells Arshi that he didn’t leave the show because he feared the competition.

5.00 pm: Arshi is outside sitting with the rest of the housemates. She keeps talking to the others while Sonali suddenly comes and throws water on her. A few of the housemates go and confront Sonali over the same. Arshi also confronts her over the same. Nikki fights with Sonali and calls her weak. She later says that she didn’t know it’s not allowed to throw water. She also hugs Arshi later on and they clear things out.

Later on, Bigg Boss reprimands the housemates over their lame excuses regarding tasks. They are confronted over making fun of tasks, breaking rules, and canceling them on purpose. They are informed that there won’t be any immunity or captaincy task inside the house. Moreover, they will have to earn their ration beginning from the next week. They are refrained from using the BB mall and spa.

6.00 pm: Sonali tells Rahul to warn Nikki not to talk about her allegedly threatening to bring people from outside. However, the latter keeps talking about it and Sonali confronts her again. She then says that she never said the same. Rahul informs her about the rules of the house.

7.00 pm: Nikki and Abhinav discuss the cancellation of tasks. Meanwhile, she tears apart the paper with Sonal’s initials.

9.00 pm: Arshi comes and says that someone tore Sonali’s paper. The latter asks Abhinav if he knows about it but he denies the same.

9.15 pm: Sonali uses some cuss words for the person who tore the paper. Rubina confronts her and tells her not to include her name. Their fight intensifies and Rubi ends up saying that she tore the paper. She also slams her for using cuss words. The fight continues further when Sonali comes over to Rubina’s table when she was eating. Abhinav warns her not to give them (Nikki and Rubi) outside threats. Rubina asks her in anger if she could use such words for her daughter.

9.30 pm: Abhinav tries to console Rubina. Meanwhile, Sonali says that they are constantly talking about outside threats so she is giving the same for the first time.

9.45 pm: Abhinav tries to clear things out with Sonali. He also tells her that he was the one who tore her name tag. Later, Rakhi also comes and says the same to break the ice. In the midst of all this, Abhinav and Rahul get into a fight.

10.00 pm: Rubina clarifies her statement in front of Aly, Abhinav, and Nikki. She says that she didn’t target her daughter and instead brought in a reference.

10.30 pm: Rubina takes all the tags and breaks them in front of Sonali, Rahul, and Arshi.

10.45 pm: Sonali and Rubina’s fight continues over the previous brawl. The other housemates try to separate them. Sonali breaks down in front of Rahul and Eijaz stating that her name has value.

11.00 pm: Nikki alleges that Sonali pushed her amid the fight. She asks to be called to the confession room and takes off her mic. Rubina and Abhinav try to console her.

11.15 pm: Rubina and Abhinav discuss Sonali’s behaviour. Rakhi asks and confronts her about the outside threats. She gets into another argument with Nikki.

8.00 am: The housemates wake up after the lights are turned on and a song is played in the background.

8.45 am: Rakhi hilariously tries to flirt with Abhinav. Meanwhile, Nikki tears off Sonali’s photo near the bathroom.

1.30 pm: Arshi says that someone has torn Sonali’s photo.

2.00 pm: Rakhi is asked if she has torn the photo. However, she says that she didn’t do the same. But she does admit that she gave that particular person the photo as she was threatened.

2.15 pm: Rahul asks Nikki if she has torn the photo but she refrains from admitting the same. Sonali asks Rakhi the identity of the person whom she gave the photo. However, the latter doesn’t reveal the same.

3.00 pm: The housemates are given a task. Rakhi and Arshi are given the responsibility to gather ingredients for themselves. The one with the most number of items will win the task.

3.30 pm: Arshi ends up winning the task and wins a gift hamper.

4.45 pm: Abhinav and Rubina have a discussion about Rakhi. He also says that he will support the latter when given a chance. He also adds that Rakhi is not his close friend and that he has just known her for some time.

5.15 pm: Rakhi talks to herself while speaking about Riteish and Abhinav.

7.15 pm: Arshi and Aly hilariously talk about Sonali. Meanwhile, the latter sings a song for Aly. The three of them indulge in a fun banter later on.