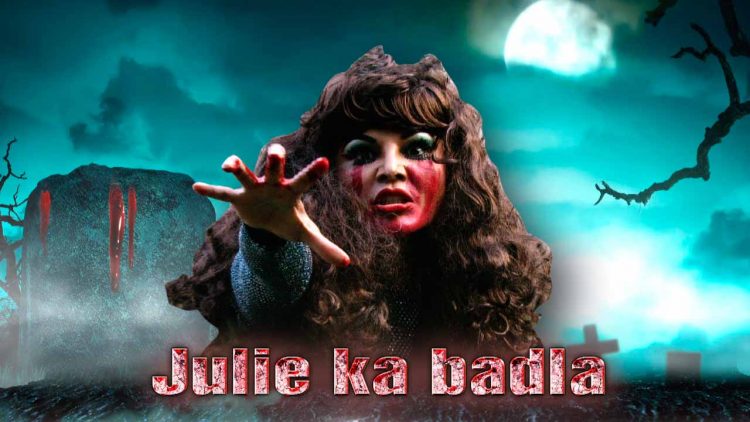 Ever since Rakhi has allegedly been possessed by a 200-year-old spirit, housemates and viewers alike have witnessed a whole lot of drama in the Bigg Boss house! From scaring Eijaz to shouting at Rahul Mahajan, Rakhi aka Julie has had the house both in splits and in fear. This time, however, she takes things to the next level!

Bigg Boss conducts a very special, spooky Captaincy task for the housemates. In the task, Rahul Mahajan poses as the Zamindar while Rakhi Sawant poses near the fountain as the spirit of his dead wife whom he has killed. The housemates are the guests in Rahul Mahajan’s house where his new wife is Jasmin! As  aatma, Rakhi needs to be ignored by the contestants. Whichever contestant acknowledges her will be out of the race for Captain! In each round, whenever Bigg Boss will sound the siren, Rakhi can enter the house and take her badla on both Rahul Mahajan and the housemates!

Rakhi starts the task by posing as if she has been possessed by the spirit of Julie. As Julie, Rakhi promises to seek her revenge on the housemates. She also swears that she will not let Jasmin become captain this time!  Rakhi is seen pacing around the garden area and whenever the buzzer would ring she would enter the house to take ‘Julie Ja Badla’!

Rahul Vaidya, Aly Goni, Nikki Tamboli are all freaked out as Rakhi chases them and delivers a whole lot of scares! Her ultimate target however, is Rahul Mahajan. As Julie, Rakhi takes her revenge on him! Earlier, she is even seen breaking a photo frame with Rahul’s picture inside. She even promises that she’s going to tear Rahul’s dhoti and turn it into a rumaal!

Later, it seems like Rakhi was not joking about the dhoti bit as she goes all out on Rahul. Even as Jasmin tries to intervene, Rakhi pulls off Rahul’s dhoti! With this act of hers, things seem to have gone too far. Rahul Vaidya steps in and says this has to end now. Jasmin, too, is angry with Rakhi. Aly loses his cool and says that the ongoing Captaincy Task will not happen until Bigg Boss takes action regarding Rakhi’s behaviour towards Rahul Mahajan.

Has Rakhi Sawant aka Julie gone too far this time? Will Bigg Boss take action against her?