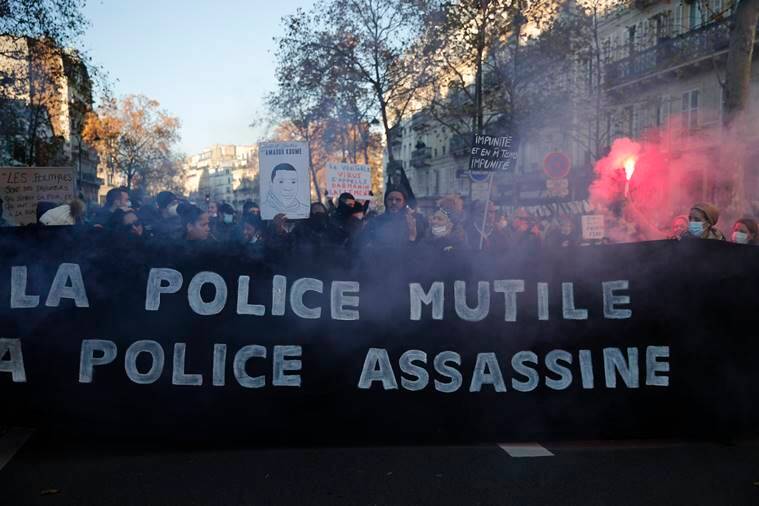 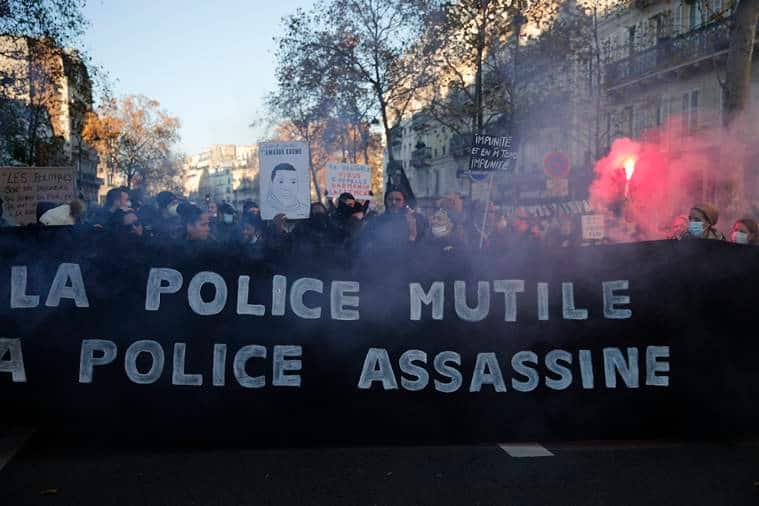 Protesters hold a banner reading ‘Police mutilates, police murders’ during a demonstration against the new security law, in Paris on November 28.(Photo: AP)

French President Emmanuel Macron’s ruling party agreed on Monday to completely rewrite a draft plan
that would have curbed the freedom to share images identifying police officers, after large protests over the weekend against police violence.

More than 133,000 people, including 46,000 in Paris alone, demonstrated against the draft bill and in favour of free speech on Saturday. The rallies followed the publication of video footage of a Black man being beaten up by three police officers inside his own music studio earlier this month that Macron has branded “shameful” for France.

A provision in the draft law known as article 24, a key plank in Macron’s plans to court right-wing voters by being tougher on law and order ahead of his 2022 re-election bid, had sparked outrage in the media and on the left of his own party. “We propose a new version of article 24 and a new version
will be submitted,” Christophe Castaner, head of Macron’s Republic on the Move (LaRem) party in the lower house of parliament, told a news conference.

French journalists and even the government’s own independent ombudsman on human rights said the article was too vague and could have a chilling effect on people wanting to expose police brutality. The footage showing the violent arrest of Michel Zecler in his studio, which prompted international criticism, made it even less tenable for Macron to press on with article 24, French officials said. “We acknowledge that there are doubts, that some people consider that the right to inform is under threat… That is why
it is necessary to clarify it,” Castaner said.

His statement came after Macron held an emergency meeting on the bill at the Elysee palace earlier on Monday with leaders of his parliamentary majority and his tough-talking interior minister, Gerald Darmanin, a former conservative. Many of Macron’s more centre-left followers have expressed
dismay at what they see as the president’s “conservative turn” in recent months.

The stated aim of the broader “general security” bill is to provide better protection for French police officers, whose unions said were under heavy strain after months of violent “yellow vest” protests.

A new version of article 24 will be submitted at a later date, officials said, although it remained unclear when, since the bill, approved last week by the lower house, has now been sent to the upper house, where the conservatives, and not Macron’s party, have a majority.