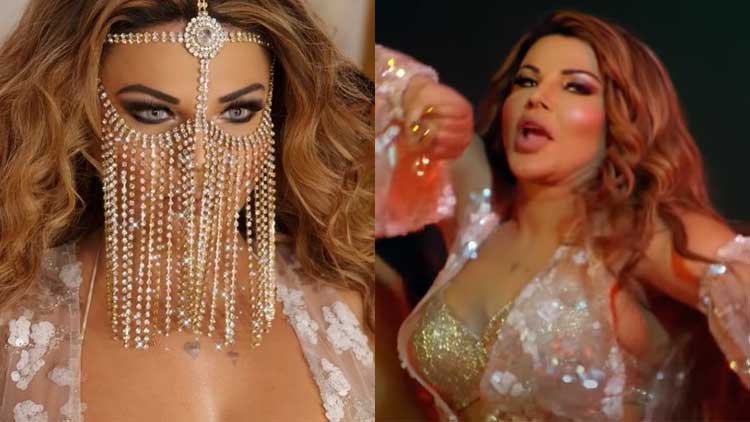 The most entertaining celebrity Rakhi Sawant new song ‘Dream Mein Entry’ released yesterday and the actress can be seen flaunting her killer moves in the song. The song presented by Saregama, sung by Jyotica Tangri and rapped by Prikshit Gupta is winning hearts of the audience. Rakhi spoke to News Helpline about the song, challenges she faced while shooting during corona and much more.

Talking about her experience shooting the song, Rakhi shared,”Shooting the song was a big challenge. My director -choreographer Shabina Khan has worked so hard for it. She is also art directed the song. Just before the shoot, my costume designer got Covid. So the costumes did not reach the sets. I had to mix and match my own costumes. “

She further added,” Just a night before the shoot, Shabina and I were discussing about the clothes on phone. Once my costumes were finalised, she sent it to her team to organise for dancer’s costumes accordingly. But overall it was a fun experience.”

Talking about her dance moves,she said,”I am a hard core dancer. But when I came on the set, Shabina asked me to limit my dance steps. She wanted my grace and oomph factor in the song. Therefore, she did not allow me to show my latka jhatkas in the song.”

Saregama is coming with new and hits songs back to back. Talking about her association with them, she said,” This is my first song after Big Boss. When Saregama offered me this song, earlier they wanted to do a cover of it. Eventually it was decided to do a full fledged video song on it. This song is just a trailer for the audience. I will be soon doing more songs with Saregama team.”

Rakhi is getting a lot of support from the industry for her song. Thanking them, she said.”I have a lot of friends in the industry and all of them support me so much. Aly, Rahul Vaidya, Anita Hassandani, Gauahar Khan, Kashmera Shah, Bharti ,Krushna, Devoleena, Vikas Gupta, Vindu Dara Singh, Pavitra Punia all these people shared the promo of my song on their social media. I  consider myself very lucky that I am a part of bollywood.”

Salman Khan helped Rakhi in getting her mother’s treatment for Cancer. Talking about the same, she said. “Salman Bhai helped my mother get free from Cancer. He got the best doctor and got my mother operated on. Priya Dutt ji also helped me a lot. I want to thank them from the core of my heart for their support.”