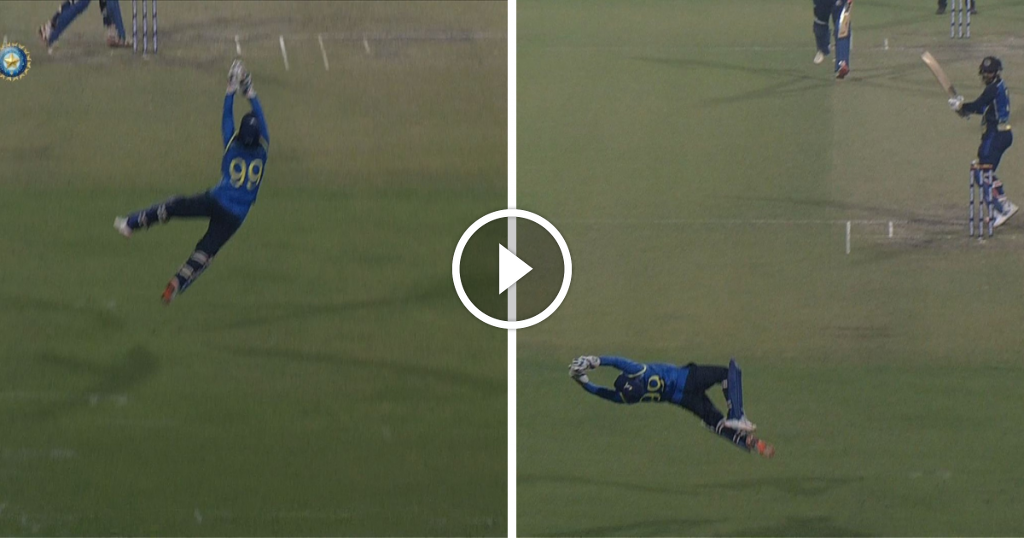 Bengal wicket-keeper batsman Shreevats Goswami had an eventful day on the field with both the bat and the keeping gloves as Bengal completed their third consecutive wins in the ongoing Syed Mushtaq Ali Trophy at the Eden Gardens. The host chased down 158 runs set by Hyderabad quite convincingly with 10 balls to spare and six wickets in hand.

Opting to bowl first, Ishan Porel gave Bengal an early breakthrough before Tilak Verma pulled off some of the extravagant shots. Hyderabad boasted a run-rate of over 8 at the end of 10 overs with Verma reaching his half-century before Shreevats Goswami grabbed a fine catch.

Akash Deep got the better of the batsman with a bouncer as the ball brushed the gloves of Tilal Verma, who tried to pull the ball. Meanwhile, the ball was traveling fast and it was at a decent height but Goswami made a timely jump to complete the catch with both hands.

Also Read: Watch – Yashasvi Jaiswal Answers S Sreesanth With Two Back To Back Sixes After The Pacer Sledges Him

Shreevats Goswami complemented this catch with another ripper, this time jumping on his left side to dismiss R Ravi Teja. The ball was traveling quickly after finding the outside edge of the bat but Goswami pounced on to it on time to pull off one of the best catches one will ever see.

Meanwhile, Shreevats Goswami backed his keeping efforts with a match-winning knock of 69 runs. Bengal were in a spot of bother after losing quick wickets including Manoj Tiwary to be at 88 for four but Goswami took the onus on himself. He partnered with all-rounder Writtick Chatterjee to take his side over the line.

While the southpaw remained unbeaten on 69 runs from 48 deliveries including 11 boundaries while Chatterjee contributed 39 runs from 28 balls with the help of three boundaries and two massive sixes.

Bengal currently have 12 points from three matches, equal to Tamil Nadu, but are currently placed second in the points table on the basis of strike-rate.