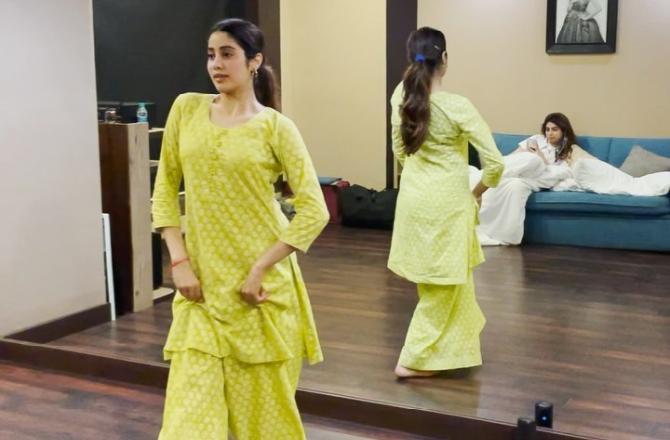 If you thought Janhvi Kapoor was only passionate about acting and fitness, well, here’s another passion that she possesses and it’s likely to remind you of her mother, late actress Sridevi. We are talking about her passion for dance.

Janhvi shared a video on Instagram where she could be seen dancing on the song, Kanha, from Shubh Mangal Saavdhan, and it’s surely bewitching. Janhvi’s younger sister Khushi too features in the video. “Hope you guys are more amused than my sister was swipe to see me make a booboo (sic),” Janhvi captioned the video.

Janhvi recently indulged in some sibling love with sister Khushi in an Instagram post she had shared. The image she posted had Janhvi hugging Khushi from behind, even as her younger sister looks at the camera and smiles.

Before this, the Dhadak actress had posted a string of pictures on Instagram. In the images, she is seen sporting vintage ensembles, makeup, hair and jewellery.

In an interview recently, when asked about favouritism and groupism in Bollywood, this is what the actress had to say, “I auditioned for films within Dharma also. I actually auditioned for a film in Dharma only that I didn’t end up getting.” She was then asked if it was Karan Johar who informed her about her rejection, she said, “No, the director will tell me and then Karan will also tell me, ‘For this reason…’, ‘You are looking too young’ or whatever.”

In the same interview, Kapoor also spilled the beans on how her father and filmmaker Boney Kapoor reacted when the actress was trolled for Gunjan Saxena. She revealed, “Yeah, it hurt my father, but he had seen the film much before and his belief in my performance and the film was so strong that he was not so affected by the social media situation. That gave me a lot of strength as well.”

After making her debut in 2018 with Dhadak, Kapoor was seen in Ghost Stories and Gunjan Saxena and is now gearing up for Dostana 2 and Takht.

Also Read: Janhvi Kapoor Says The Day She Does Not Annoy Khushi Are Days That Are Incomplete