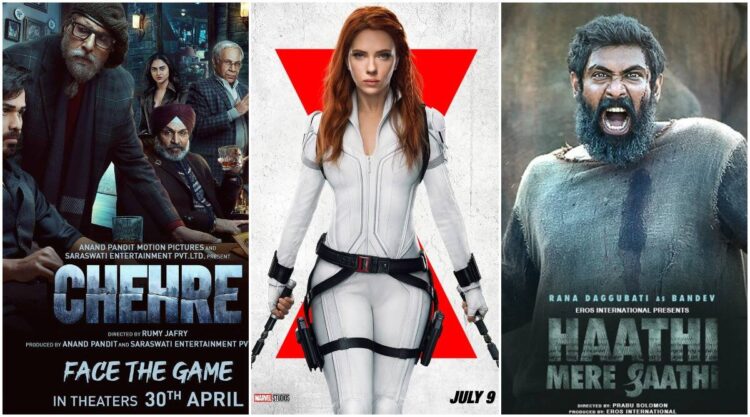 As coronavirus numbers spike, 2021 has started feeling like a 2020 redux.

The Hindi film industry that has been bleeding for over a year now, saw a glimmer of hope at the beginning of the new year as Roohi managed to bring audiences back to cinema halls, followed by Mumbai Saga. It appeared good times were ahead as filmmakers announced the release dates of their upcoming films, with Sooryavanshi, Chehre, Banti Aur Babli 2, Radhe: Your Most Wanted Bhai and Satyamev Jayate 2 lined up for release in the coming months.

However, as COVID-19 went on rampage again, amid the surging numbers, clampdowns and night curfews, many filmmakers have already withdrawn their films’ release dates. While Haathi Mere Saathi makers decided to delay its release, Chehre and Bunty Aur Babli 2 have also been postponed. Internationally, Marvel tent-pole The Black Widow’s release date has again been shifted. Punjabi film Puaada, starring Ammy Virk, has also delayed its release. There are reports that some other big Hindi films may push their release dates again.

This means humongous losses for a film industry that supports lakhs of people – from actors and directors to technicians and daily-wagers. The once bedazzling theatres and cinema halls wear a deserted look, even as the industry wonders how it will deal with the massive costs it is ill-prepared to fork out. An industry which is already dealing with losses going into thousands of crores, says it is going to be worse than 2020 if losses keep on mounting.

Film producer Anand Pandit was confident of releasing his Amitabh Bachchan-Emraan Hashmi-starrer Chehre in cinemas. Less than a fortnight ago, he had told indianexpress.com, “Now that films are being released in theatres, businesses are slowly going back on track. At this point we know how to better take care of ourselves by following SOPs and COVID-19 related protocols. There was a fear that had set in the mind of people, now everybody is more careful and responsible. So, it is a good time for our films to release in theatres.”

However, on Tuesday, Pandit announced that Chehre will not release on April 9th as planned earlier. He said, “I have always lived by the maxim of ‘safety first’. Given the rising number of COVID cases, it is only right that we delay the release of Chehre. Audiences have already showered the trailer with a lot of love and every member associated with ‘Chehre’ wants cinema lovers to watch it on 70 mm. We are ready to wait for the right time and to ensure our audiences remain safe.”

It is not only producers who are stuck in a tight spot, film exhibitors and cinema owners are having a tough time too.
The night curfews back in Mumbai, which make it mandatory to close theatres by 8 pm. With the 50% occupancy clause in SOPs, exhibitors are worried that people won’t come to watch films at all, and now they are also concerned that they won’t have new films to show too.

Akshaye Rathi, a film exhibitor and distributor with operations spread across the central Indian states of Maharashtra, Madhya Pradesh and Chhattisgarh, calls this a “haphazard solution”.

So much of speculation about the release plans of #Sooryavanshi & #Radhe. If there is any change, the producers will announce it! Let’s hold our horses & not make assumptions without knowing the facts! #Cinema #India #Films

He says, “I have absolute faith in the authorities of our country, pretty much everything has been opened up, whether it is political rallies, restaurants or moving on the streets. And, looking at the numbers of Godzilla vs Kong, even after a very limited release, it looks like people are ready and more than willing to come back to theatres.”

Terrific footfalls for #GodzillaVsKong all over the country! The audience is responding fabulously to content that demands the theatrical experience & showering it with their love & money! Can’t wait to watch this mammoth clash on the biggest screen in my vicinity! How about you?

Rathi wants the government to pay heed to the need to reopen cinema halls for them to earn their living and pay salaries to their employees. He says, “After one year of depriving cinemas of absolutely any income, after not giving them any kind of financial relief or support, the only thing that the government authorities can do is let them earn their own bread and let them enough to pay the salaries of millions of employees this sector employs.”

Annoyed with the fact that other businesses and political activities stay unaffected while cinemas bleed to death, he said, “Lakhs and lakhs of people are going out for political rallies and when streets are crowded, I don’t think they won’t come for movies that they really want to watch, knowing that cinema halls are following all the rules properly and are following for best safety regulations.”

Last week, Mumbai’s BMC announced that people will have to show a negative COVID-19 report or get a rapid test done before entering a mall. How does this new rule affect cinemas, Nitin Dattar, owner of a theatre in Karad, Maharashtra and president of the Cinema Owners and Exhibitors Association of India says, “The theatres which were closed for almost a year have slowly started opening up and operating, in Mumbai, Pune, Kolhapur and other parts of the country too. With this second wave, and producers delaying their films’ release, cinema halls, especially the single screens and exhibitors are going to have a tougher time this time.”

He also says, “The SOPs that the government has recently published, for cinema halls, states that if in a cinema or in its compound, if four or more people are found together without maintaining social distancing, then the government or the local authority has got the right to suspend the license until the coronavirus situation is under control, or declared to be controlled by the central government. I think this is a very harsh clause imposed on cinemas, because all theatre owners are trying their best to follow SOPs. At the same time, the audiences also need to act responsibly. We have requested the state government to help us as we have just started our cinemas. Even if they help us with police constables, they can control the weekend crowd.”

Worried about not being able to pay cinema employees their salaries, Dattar added, “One single screen cinema employs at least 100 employees, how do we pay their salaries? What about the owner, who has no income but continues to pay electricity bills, and other taxes. We had a good business in the first week of Mumbai Saga, so we were hopeful, but now we don’t have any films. We were very hopeful when Roohi and Mumbai Saga released, because the line of releases was exciting and people were looking forward to it, but now with films like Bunty Aur Babli 2, Chehre’s release delayed, it all looks hopeless, it is like we are not back to square one, but minus one.”

Nambi Rajan, owner of Sion’s landmark single screen — Aurora theatre, where people from all over the city flock to watch south Indian films has been shut since the COVID-19 induced lockdown. Rajan says, “we were quite hopeful that we will be able to restart operations this year. Mammoothy’s The Priest did so well in Kerala so we thought it would do well in Mumbai too, but it didn’t. So, we didn’t open Aurora even this month, and now we are not even planning to restart any time soon. I had spoken to a few hospitals and malls to employ my staff and security people, and they are working there, some never returned from their native places, but once things start we will be in a better state and we’ll be able to bring them back.”

Various cinema owners and exhibitors have expressed concern over their business falling apart due to COVID-19, with no solutions at hand. Producers are in a double whammy situation too, with their films not earning well on being released in theatres. People are choosing to watch content in the comfort and safety of their homes. The question remains: what happens to these dream factories?