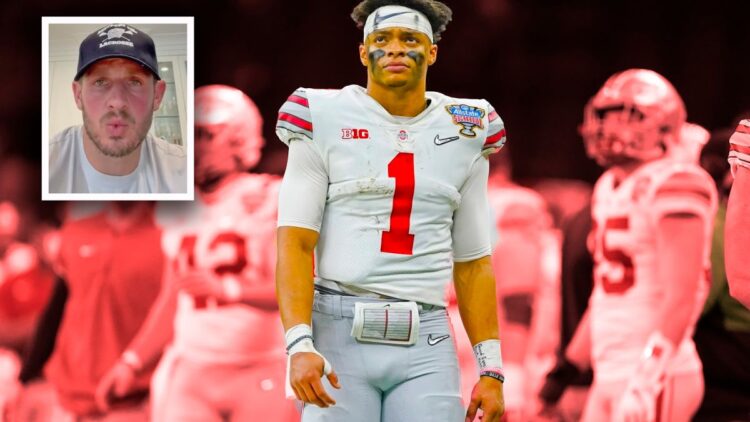 I find myself often being perplexed by the way some things are happening. Currently, one of those situations is the seemingly-inexplicable decrease in draft stock of a quarterback prospect I love, Justin Fields, who before the season was the consensus second-best quarterback behind Trevor Lawrence. It makes no sense to me. All the kid did in 2020 was dismantle the competition, starting the year with a game in which he threw only one incomplete pass. He finished the season with a 70.2 completion percentage, with 22 touchdowns and six interceptions in eight games. He also ran for 383 yards and five more touchdowns on the ground. Yet, somehow, this elite recruit, who has had elite college production, is now being viewed potentially as the fourth- or even fifth-best quarterback in this draft class, behind the likes of Alabama’s Mac Jones and North Dakota State’s Trey Lance.

Lance, in his own right, has been battling the stigma against running Black quarterbacks since he was in high school. A Minnesota native, Lance had dreamed of playing for the Minnesota Golden Gophers. While on a visit to the university, head coach P.J. Fleck told Lance that he would recruit him as a safety, but not as a quarterback. Following that visit, recruiting services changed his position from QB to ATH (athlete). According to NFL.com, Lance noticed the position change that day, on his drive home from the visit. After that, he was not recruited by Power 5 schools.

I’ve been angry, but I didn’t understand why. Not understanding is partially my responsibility. See, as my co-worker Carron Phillips recently penned in an article regarding the shock and dismay of New York Yankees general manager Brian Cashman about the racist treatment that Mashahiro Tanaka received during his time with the Yankees, prompting him to return to play professional baseball in Japan:

“We don’t need your astonishment and disbelief. It’s pathetic and disrespectful. If you want to be of service, educate yourself. Because only then you will understand that these instances are the rule and not the exception.”

He’s right. This is nothing new. We had this conversation in our company group chat just two days ago, with me expressing my frustration and disbelief that Justin Fields could be seen as anything less than a top-tier quarterback in this class, and was slapped in the face with the reality that this is nothing new for Black quarterbacks pre-draft. The reality is that I’m a white man in America, and I will never see everything through the same lens as a Black man. I wasn’t raised with the inherent understanding of the realities of inequity in the foundation and infrastructure of our country. I was raised believing that “all men are created equal,” despite the actions of the very men who signed that declaration owning slaves.

As I continue to learn, and undo the institutionalized white-washing of American history and culture, I continue to do my best to listen and educate myself. We all have to. It’s imperative that we continue to identify our blind spots and listen with a heart towards those that have been marginalized in the journey to sympathize. I wrote several months ago about Black quarterbacks in the NFL not being given the same opportunity as white quarterbacks. I don’t know why it should surprise me that the exact same mentality would translate to the draft process. It was a connection that is far too obvious for me not to make, but I didn’t see it that way.

On the heels of this intra-company conversation regarding Justin Fields, more kindling was thrown on the fire by ESPN analyst Dan Orlovsky, who made wildly irresponsible and inflammatory remarks regarding the character and work ethic of Fields on the Pat McAfee Show.

I call bullshit. Justin Fields is adored by his coaches and teammates. On Monday, Ohio State head coach Ryan Day issued his support for the quarterback.

“Whatever they teach in terms of a scheme, he’s going to pick that up very, very quickly,” Day said via ESPN. “And he’s very, very competitive. So when you combine the talent, the size, the arm strength, his competitiveness, his toughness, his intelligence, it kind of checks all the boxes. If you were trying to design a quarterback, to me, Justin fits that prototype.”

There has never been any off-the-field issues around Fields, and no comments or concerns in any way about his work ethic or his commitment to and his passion for being the best quarterback he can be. To top it off, Orlovsky doubled-down with a video this morning trying to apparently clear the whole mess up.

To start this video, Orlovsky had apparently “done some digging” and heard from “multiple teams” that there were questions about his commitment and his desire to be great and all that. This I can actually believe. I can truly believe that people in the front offices of professional football teams potentially leaked the same kind of slanderous rhetoric that they have repeatedly used to discredit and squash out Black quarterbacks in the NFL. We heard the same thing with Lamar Jackson, Geno Smith, Cam Newton, Robert Griffin III, and countless Black quarterbacks that have come before Fields. As it has been dubiously dubbed, Fields is paying the “Black Tax.”

I believe Orlovsky heard that rhetoric. According to his video, it was also incredibly easy for him to pick up a phone and call the coaches that have actually worked with Fields, which is something he should have done before making slanderous comments that could potentially impact the career of Justin Fields.

“That forced me to do even more digging over the last 24 hours,” said Orlovsky. “I had two conversations that I want to put out there to try and clarify the situation, or put more out there about the situation. One conversation I had is with an offensive coach at Ohio State, and he said ‘tell them that is absolutely not true; that Justin Fields’ work ethic is spectacular, and that he is a guy that has great football IQ and that is always studying tape,’” Orlovsky said.

Orlovsky continued: “Then, the second conversation I had is with John Beck, who has trained Justin [Fields] as he was heading into his pro day. And John’s had a really positive experience saying ‘listen, this guy is always working incredibly hard on the field, and even after we’re done with our field drills, he’s the guy that wants to stay after and work on different footwork and different throws.”

“In the last 24 hours with more digging, it seems like Justin Fields’ work ethic is fantastic,” Orlovsky concluded.

Well no shit, Dan. This isn’t news to any of us.

There are two major problems at play here, one of which is far more deeply rooted than the other. Firstly, Orlovsky disseminated inaccurate information without vetting it. That was a mistake. Secondly, however, is much more troubling — the NFL, built on the talent of Black men who account for 70 percent of the league, with some of the top-tier, groundbreaking quarterbacks in the league being Black — continues to perpetuate, behind closed doors, racial tropes surrounding what a quarterback should look and sound like in the NFL.

For those of you saying it’s “smoke and mirrors season” and that teams are just trying to get the guy they want to fall to them, then tell me why I haven’t heard a single comment remotely close to this about any of the top-four white quarterbacks in this class. This isn’t a strategic move — it’s a racist one.