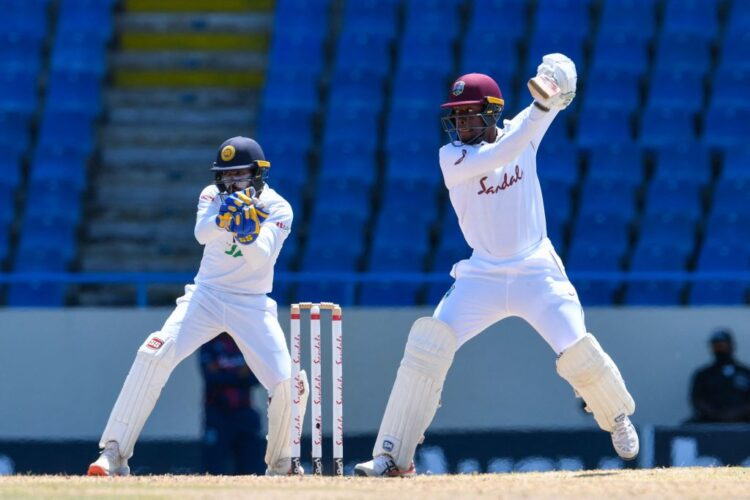 WI vs SL 2nd Test Stumps, Day1: Brathwaite remains not out on 99, saves West Indies from first innings embarrassment; WI-287/7 (86 ovs)- At the end of the day’s play, West Indies captain, Kraigg Brathwaite remains not out on 99 along with Rakheem Cornwall who is not out on 43. Both the batsmen are looking solid and will hope to consolidate from here on and help West Indies establish a good first innings total. It was Suranga Lakmal who gave the Lankans a dream start in their bid to script history to become the first Lankan side to register a Test series win in the Caribbean. But the West Indian captain stood like a wall in front of the Lankans as he notched up his fifty.

Lakmal struck early to remove John Campbell and then took the wicket of danger-man Nkrumah Bonner who registered a gritty ton in the WI vs SL 1st Test. Ever since the start of the West Indies innings, wickets kept tumbling at regular sessions barring one solitary partnership between Brathwaite and Kyle Mayers.

In India W.I vs SL 2nd TEST is being LIVE Streamed on FanCode and follow LIVE Updates on InsideSport.co

WI vs SL Day 1: Sri Lanka may play an extra spinner – Lakshan Sandakan – if they think the track could take decent turn in the second innings. To cover their bases, they may bring seam-bowling allrounder Dasun Shanaka into the side. Dinesh Chandimal, who had only made one fifty in his last three Tests, may make way for Shanaka. Either Vishwa Fernando or Dushmantha Chameera may be displaced by Sandakan.

The West Indies will have been quite happy with their overall performance from the first Test, and so will not want to change up too much. Shannon Gabriel was relatively disappointing but he will likely be backed to put forward an improved showing.

The temperature is expected to hover around 29-degree Celcius with cloud cover. We can expect a passing shower on the opening day of the contest.