A driver has a poster of Mela behind his truck, Twinkle Khanna reacts 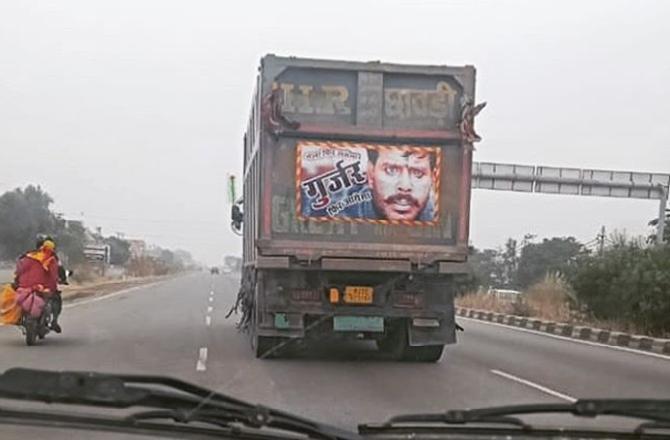 Mela marked the first release of the Millennium, a film that starred Aamir Khan, Faisal Khan, and Twinkle Khanna. The antagonist of the story was ace action director Tinu Verma. Despite the hype and the hulla, the film failed to make a mark at the box-office. Khanna has often poked fun at its failure.

And now, the occasion of revisiting the film dropped again in her life when she saw a poster of Gujjar (played by Verma) stuck on the rear side of a truck. Taking to her Instagram account, she not only shared the picture but also expressed her thoughts on the same.

This is what she had to say- “Certain things, I suppose, are timeless! This popped up in my messages today and what can I say except Mela has certainly left a mark or a scar, whichever way you look at it, on me and the rest of the nation:)” [SIC]

After Mela, Khanna was also seen in films like Love Ke Liye Kuch Bhi Karega and Joru Ka Ghulam and after tying the knot with Akshay Kumar, bid adieu to acting. She’s now an author and has also turned producer. She was one of the producers of Kumar’s 2018 drama, Pad Man.

The last time we saw Aamir Khan on the big screen was in November 2018 in Yash Raj Films’ Thugs of Hindostan with Amitabh Bachchan. He was supposed to be seen on the celluloid again this year in December in Advait Chandan’s Laal Singh Chaddha. But due to the lockdown, the film will now arrive next Christmas.

The film also stars Kareena Kapoor Khan and Mona Singh. A report by Mumbai Mirror said that Shah Rukh Khan is all set to have a cameo in this drama inspired by Forrest Gump and the cameo will be directed by none other than Aamir Khan himself. Aamir directed the drama Taare Zameen Par in 2007 and it has been a while since he went behind the cameras.

Also Read: Twinkle Khanna: I Won’t Return To Acting, Spotlight Gives Me A Bit Of A Heat Stroke

RHOSLC’s Heather Gay Reacts to Jen’s Arrest as Dorinda Weighs in and Questions Why...