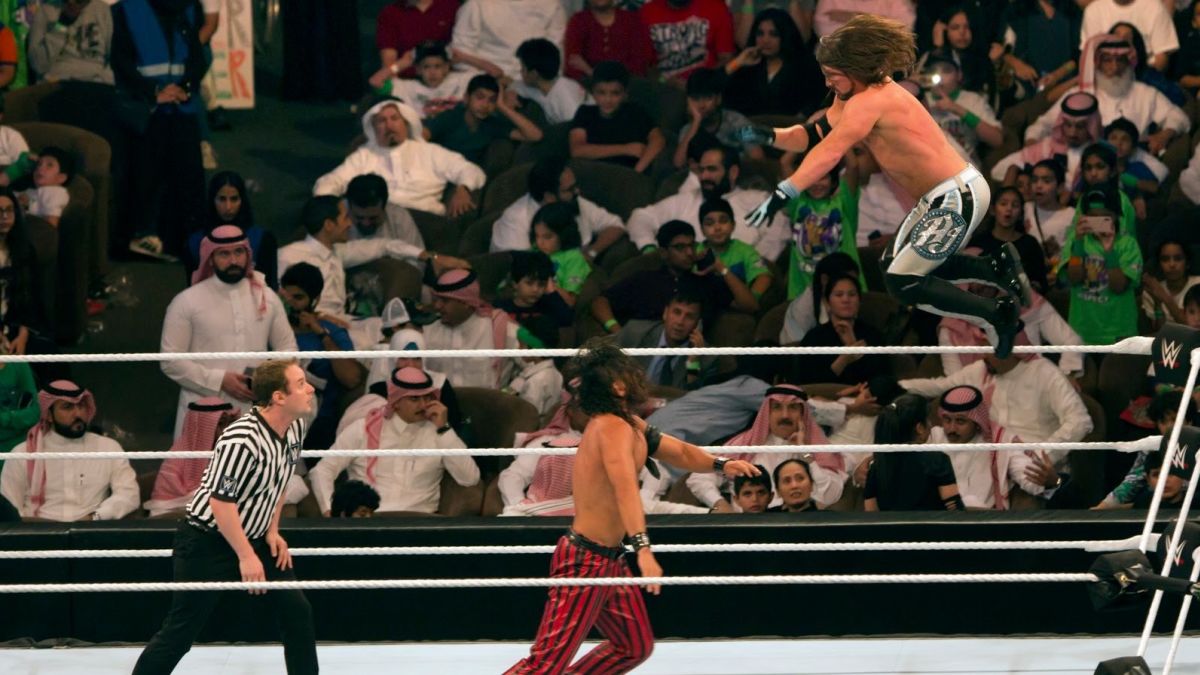 Wrestlemania season kicks off for real this Sunday, in the strangest Royal Rumble WWE has ever had. At least it will be, with only manufactured crowd noise, no live audience, and the possibility of any kind of theatrical goofiness they can think of possible. The rumors of a prerecorded finish or finishes are already flying. The mind reels. What do we think will happen? Find out!

Who Will Win the Men’s Royal Rumble?

Sam: I’m going to cop out here a bit and give two options. The Daniel-Bryan-finally-getting-his-Rumble-win seems too obvious and was overplayed from the minute he was the first to announce entry. So they’re not going that route. The more obvious call is Edge. They already eschewed his “surprise return” by having him announce on Raw he was going to be in it. But he’s going to be there, and it has to be special that he is, and Randy Orton seems tied up in an angle with The Fiend and Alexa Bliss. Edge vs. either Drew McIntyre or Roman Reigns is a Mania main event easily, especially against Roman, giving the company just about the biggest face vs. heel dichotomy they could possibly want.

The second is Roman winning it. Yes, he probably won’t even be in it. But there’s nothing Vince loves more than overdoing it, and they’ve been playing with Roman running the company and making his own and others’ matches for weeks now. It’s so easy to see him inserting himself into the Rumble — a la Becky Lynch two years ago — and then picking his Mania opponent, and shenanigans ensue. They don’t have to worry about him being booed out of the building, or can engineer him being booed out of the building if that’s what they want, thanks to them controlling the crowd reactions. It would be overkill on the brilliant run he’s on, but they love overkill.

Bryan: It almost feels like we’re due for a transformative moment in a career that may not have but so many of them left. Daniel Bryan is one of the greatest wrestlers we’ve ever seen, and has just sort of been … around? … ever since memorably losing his WWE Championship to Kofi Kingston in arguably the greatest Wrestlemania moment ever (Ed. note: Listen, whippersnapper, Hulk slamming Andre would like a word … — Rich O.).

But that was during Wrestlemania 35, which is nearing two years ago. Since then, Bryan’s been in random feuds with everyone from Bray Wyatt to Drew Gulak to Jey Uso.

His Royal Rumble victory odds aren’t as high as expected, but they’re firmly in Oddshark’s top 10, and probably will stand as such on most sportsbooks. Bryan also has a history with Roman Reigns that might be logical to bring back around — and given Bryan’s recent run-ins with him and Uso, it appears as if the WWE may trend in that direction. They battled shortly after The Shield debuted in late 2012, and Bryan’s one of the only wrestlers with the main event credentials to possibly (and despite his size, believably) dethrone Reigns at WrestleMania. By then, Reigns will have been champion for over seven months. My betting odds go to Bryan to win it, but I’m not exactly putting the house up.

Who Should Win the Men’s Royal Rumble?

Sam: Bryan is the easy choice, but it should be a time to give someone new a rub. Keith Lee seems an obvious pick, but they don’t seem ready to hotshot him to the top yet, even though they should. Also, Sami Zayn should win everything.

Bryan: For months, Keith Lee’s been my preferred Royal Rumble winner, even undeterred by reports of Vince McMahon being pissed at his work. Which is weird considering other reports of McMahon being in love with Lee one year ago. Regardless, Lee’s been presented as one of the most exciting new stars in the company’s recent history, and while he might not be due to a big moment in the same way Bryan or Big E has, Lee would generate ample levels of excitement regardless of which route he elects to take the post-Rumble win.

Ideally, he would become Raw’s new champion, especially if Goldberg defeats Drew McIntyre this week. Even if McIntyre retains, he’s owned Raw since last WrestleMania, and although it’s unfortunate that his first WWE World Championship run arrived during a pandemic, a Lee versus McIntyre April clash at Raymond James Stadium is main-event worthy. Plus, McIntyre, now in his second reign, could regain the title later in 2021.

Who Will Win the Women’s Royal Rumble?

Sam: They went outside the box with the first one and Asuka, but the last two have been pretty chalky in Becky and Charlotte. This one is definitely going to provide Sasha Banks a Mania opponent, because they don’t care about Asuka at all. So the clear answer is Bayley being the third of the four Horsewomen to claim it, giving her and Sasha the Mania stage together. I don’t like it any more than you — it feels played out for now, but it’s the easier answer, and with the women they almost always take that. And Bayley and Sasha will make the most of it anyway.

Bryan: I agree with Sam on Bayley, but I just came across two items that have completely swayed me in a different direction regarding where I think the WWE will go. Stephanie McMahon said she is ‘very hopeful’ in this woman returning to wrestling … and said wrestler tickled wrestling fans and others with a Tweet highlighting her odds at winning the Rumble altogether …

The woman is Ronda Rousey.

We haven’t seen the former UFC and WWE Women’s Champion in nearly two years, and she recently said that she hated the WWE’s rigorous travel schedule. Welp, ain’t nowhere to travel now! I think Rousey makes her return and wins it all, engaging in a rivalry with Sasha Banks, who arguably has never been better than she’s been right now. It’s a Wrestlemania 37-closing worthy encounter if executed properly.

Who Should Win the Women’s Royal Rumble?

Sam: It should be Rhea Ripley, to announce her promotion to the main roster with authority and confirm her as the next big star. But it won’t be, because she ended up on the Mania card out of last year’s Rumble with Charlotte challenging her. Bianca Belair should go from breakout star of last year’s to winner of this one. She’s everything they need and want and gives Sasha a different kind of opponent.

Bryan: Your appreciation will only grow if you watch Bianca Belair’s new documentary on the WWE Network. She’s clearly primed for multiple women’s championship runs during her WWE career, and is worthy of competing for either title on the WrestleMania stage regardless of who she is opposite of. That said, I’d finally like for the WWE to get it right with Shayna Baszler, who should absolutely pair up with Rousey if she returns, and double-cross her in the final four.

Baszler was an outstanding NXT Champion who has been mishandled on the main roster, and with zero disrespect intended toward Nia Jax, Baszler doesn’t need a tag team partner. (Jax doesn’t either, for that matter.) Baszler should abandon the team, physically asserting herself in the process, enter the Rumble, record at least five eliminations, and win. Preferably, let’s have her jump to Smackdown to face Banks.

Sam: Sami taking back the IC title. It doesn’t have to stop Big E’s ascension to global star/ruler, and the two of them should have a long-running rivalry anyway. Sami has forced the company to keep him in lights, even though it always feels like he’s three minutes away from getting buried. Also Shinsuke Nakamura being returned to anything like SHINSUKE NAKAMURA in any capacity, and someone unlocking whatever closet Aleister Black has been confined to and letting him truck like seven guys in the Rumble.

Bryan: The return of Carlito!

Look, I’m Puerto Rican, and Sam kinda looks like Sami Zayn, so we’re going with our guys here. Carlito’s been rumored to return for literally 10 or so years. He is one of the most underrated talents the WWE’s had in the 21st century, and much like with Shelton Benjamin, the company will never truly make it right. That said, Carlito is still in his early 40’s and could have a great run ahead with the company if all goes smoothly. He was even advertised for Legend’s Night but never appeared. Maybe it will, maybe it won’t, but enough of us would like to see it, even if it doesn’t result in an uber-lengthy stay.

Surprise We Don’t Want To See

Sam: Goldberg not getting trucked by McIntyre and lasting more than three minutes. The continued use of Goldberg is a fine example of WWE’s and McMahon’s worst tendencies in storytelling. But when he keeps signing billion-dollar TV deals, how will he ever be convinced he’s wrong?

Also Charlotte turning on Asuka in the tag team match, setting up yet another Charlotte victory over Asuka for the Raw Women’s title somewhere down the line, just so Asuka can be discarded for months again.

Bryan: No rushing of certain NXT talent to the main roster. Again, Boricua here, so I’m riding with Damian Priest, a.k.a. Punishment Martinez, but he’s being rumored to debut on the main roster, which may begin this Sunday. Granted, the vast majority of NXT wrestlers are beyond worthy of being on Raw or Smackdown on talent, and in other instances, character alone. But we’ve seen far too many mishandlings in recent years to feel optimistic about the transition in general. Having debuted as Priest in June of 2019, he hasn’t even been on NXT under the moniker for two complete years. Instead of rushing him at the risk of irresponsible care at the next level, and that goes for Raquelle Gonzales or anyone else who might be shockingly a part of the main roster after Sunday.

On the flip side are the Undisputed Era, Tommaso Ciampa, and Johnny Gargano never going to Raw and/or Smackdown? They’ve all been in NXT across three different Presidential terms now. (I understand if Triple H doesn’t want to let them go, though.)

And lastly, speaking of mismanaged NXT alums, where the hell is the homie, Andrade?

Match Of The Night

Sam: Gotta be KO and Roman. They have such great chemistry, their two earlier matches this year were absolute masterpieces, and there’s no reason this should be any different. The problem is that a third Roman win over KO pretty much neuters KO on the main event scene for a while, but they also will never take the strap off Roman for a long, long time. These two should be a plug-and-play, years-long rivalry.

Bryan: I think the women’s Royal Rumble actually presents the most shock potential given the element of a potential Rousey return, along with what is seemingly an unlimited and growing talent pool of women wrestling throughout the company. Beyond that, all either do or are expected to have meaningful storylines stemming from the event. We have Belair and Baszler as mentioned, Bayley and Alexa Bliss who are candidates to win, as well as potential NXT full-time call-ups like Rhea Ripley, Toni Storm, and Io Shirai. (Hopefully, Mia Yim could be Mia Yim, too.) Becky Lynch and Seth Rollins gave birth to their baby Roux on December 7. The 7th will be 55 days removed from the Rumble. Yes, it’s a long shot. Health permitted, it would be a welcomed surprise, and who doesn’t miss ‘The Man’ after all?