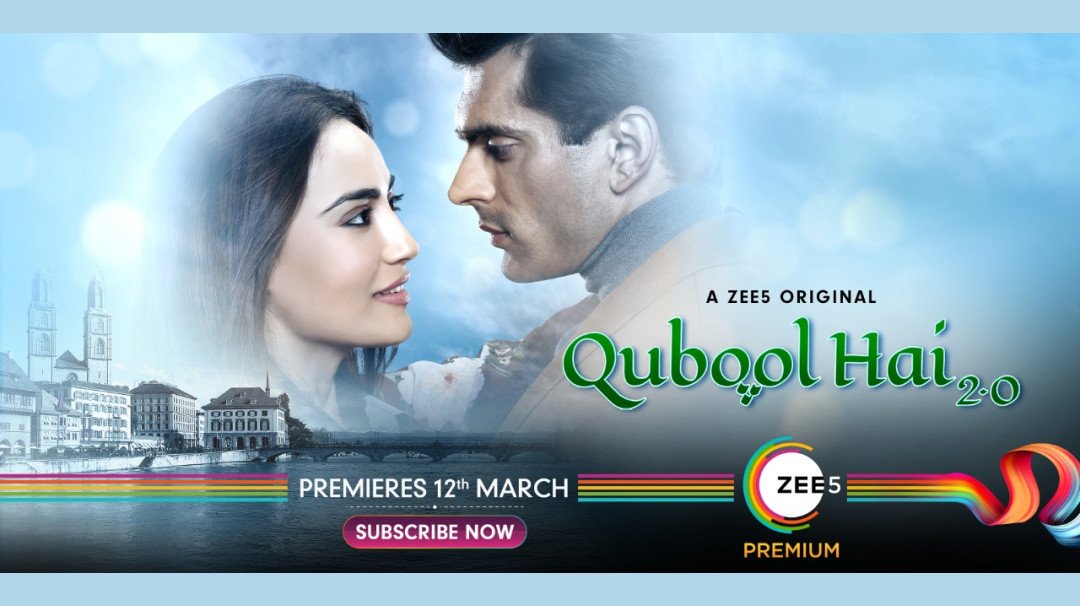 ZEE5 has come up with this interesting concept of reviving the lead pairs from their old TV shows and making a new story around them. They have tried this concept with Jamai Raja and now they have done the same with Qubool Hai.

This is a great thought because there is already a big fan base for these “jodis” and the concept that is looking forward to the show even before it is released. It is a great way to tap into this market and weave new stories around it.

Now drifting away from the concept to the show in hand, Qubool Hai 2.0 is indeed the story of Asad and Zoya but in an alternative universe. In this series, Asad aka Karan Singh Grover is a  world champion shooter and also an undercover agent for Indian National Security Council. While Zoya is shown as a runaway bride who also happens to be the daughter of Pakistan’s army chief who is also the defence minister of the country.

The setting is exactly what the Qubool Hai fans could have asked for. The same chauvinist Asad in form of Karan Singh Grover and the same chirpy Zoya played by Surbhi Jyoti.

Diving into the past

For those who are unaware of the Asad-Zoya fandom and the Qubool hai craze. It was a popular show on Zee TV that aired back in 2012. The show was about a progressive-modern Muslim girl, who falls in love with a righteous man and their love story beyond. While Karan Singh Grover played the main lead, Surbhi Jyoti made her debut with the show. The show was the talk of the town at that time and their chemistry was very popular. However, Karan Singh Grover had to quit the show and a lot of nuances were then changed.

Back to here and now, like we said this is a brand new story and so even if you have not watched the show, you can dive right in.

The show starts with Karan Singh Grover showing off his drop-dead gorgeous body as Asad takes a shower and getting ready for his match. While Surbhi Jyoti getting ready to get married and having pre-marital jitters. In a couple of minutes, it is revealed that while Zoya is getting married to a childhood friend, who is well settled and good looking but she is unsure of the marriage as she is not in love with him. At the same time, she is also looking to reunite with her estranged father who has reached out after an eternity.

Another thing that sets the screen on fire is the locals. The first episode is a visual treat and makes you want to take the next flight to Serbia. The castles are breathtaking.

The curious case of Mandira Bedi

It was a pleasure to see Mandira Bedi after a long time but her character in the series is not very clear. She plays the head of the Indian National Security Council and recruits Azad for the mission. However, her hairdo and the entire look make her look more like a mad scientist from a sci-fi movie rather than the head of a prestigious undercover organisation. Moreover, there is not much meat in the show for her to demonstrate her acting skills.

What we loved about the show

The chemistry between Asad and Zoya had made headlines nine years back and even in 2021, it is still swoon-worthy. People looking for an age-old romance will find it very endearing. The cinematography of Qubool Hai 2.0 is bang on! One just can’t get enough of the scenic beauty captured. And then there is the music. For the people who have loved the show, will find it a familiar nice touch while the first-timers will fall in love with it.

Many scenes of the series will make you time travel to the show. There are also nuances been added such as Asad’s OCD and his mannerism to give you the old-world feel. In fact, their meet in the series too is very akin to the TV show.

We have seen a lot of cross-border romance and one may feel that there are hints of those movies in this series as well. Much like those movies, this series also wants you to keep your head/logic aside and just enjoy with your heart.

Qubool Hai 2.0 manages to keep the essence of the original show as it is. There is also something to offer to the people who have not watched the show. Directed and produced by Mrinal Jha, the highlight of the show is the sizzling chemistry between Asad and Zoya. Some of the supporting characters have also done a good job in terms of acting. However, the selling point for us was the way it has been shot.

It would have been better if the makers would not have revealed certain elements regarding the show such as Asad being on the mission in the trailer. That was a big reveal that may have worked better had we known about it while watching the show. Nevertheless, there is some action, just thrill and a lot of Indie TV romance to watch in this show.