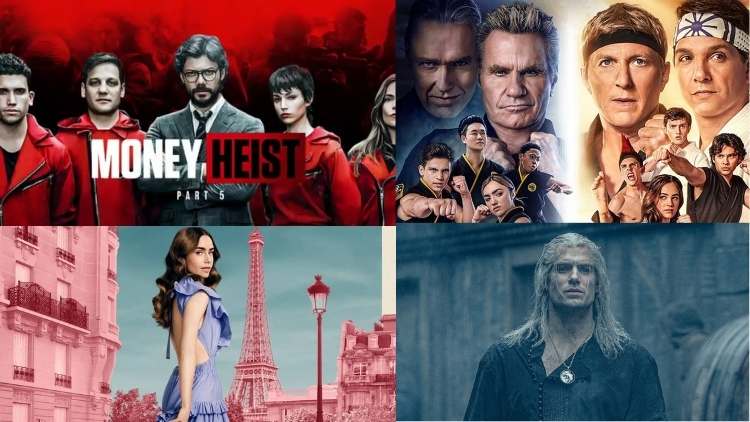 Description: The stakes are as high as it could be for the Professor as he fights to acquire the gold and more importantly, his team out of the bank. This well-known Spanish heist crime drama is back with a gripping finale to round out the sleeper-hit series, offering a resolution and end to a show that’s been a wild and thrilling ride from start to end. Will the Professor be able to walk out alive with gold as well his gang, or could be a happy ending too good to be true? Find it out yourself!

Description: The wait is finally over.. and The Witcher is back! Titular monster-hunting witcher, Geralt of Rivia (Cavill), continues trying to seek out his place within the magical world he lives in. This time around, however, we see a distinct side of our protagonist. He is forced to create connections, the likes of which he spent much of the show’s first season trying to avoid. Geralt’s recently formed relationships and their opposing demands at times definitely put a strain on the witcher and place him in a very vulnerable position which will undoubtedly bring action, drama, and intrigue that you simply won’t be ready to pull your eyes off from.

Description: Say hello to the newest season of this beloved comedy-drama based on martial arts dropping on New Year’s Eve. The most recent season begins with the seemingly impossible. Daniel LaRusso’s (Macchio) Miyagi-Do and Johnny Lawrence’s (Zabka) Eagle, Fang dojos have officially called a truce and joined hands to place down John Kreese’s (Kove) Cobra Kai at the All Valley Under 18 Karate Tournament. Whoever loses this epic showdown must hang up their gi permanently. As Samantha (Mouser) and Miguel (Maridueña) try and maintain the dojo alliance and Robby (Buchanan) goes dead at Cobra Kai, the fate of the Valley has never been more precarious.

Description: The final season is here for you and it’s set within the only place more exciting and exotic than Money Heist‘s Spain: outer space. Season 3 of this sci-fi show (which is actually a remake of the 1965 series of the identical name) sees the Robinsons’ survival instincts kick into hyperdrive as they race to reunite and save the Alpha Centauri planetary system from a big robot invasion. Tune in for some epic space story!

Description: Whether you liked it or hated it, you can’t deny that Emily in Paris‘s first season made a giant splash when it premiered on Netflix last year, and this season is poised to be even huge and bold. Emily continues to look out for her footing in Paris, while the fallout from a night of passion with hunky but committed chef Gabriel could send her stumbling into trouble. Shout “oui” to Emily in Paris: Season 2 for what’s certain to be another fashion and embarrassing season of the show you only can’t help but binge.

Description: The Netflix animated comedy series originally out of Japan is back with its fourth season, wherein Retsuko turns up the volume to prevent Haida from making the huge mistake ever when a sly new company president takes the office to a replacement extreme. For those unfamiliar, the show revolves around Retsuko, a 25-year old, single anthropomorphic red panda who works in accounting at a Japanese trading firm and is simply trying her best to form it as a working and dating young adult in 21st-century Japan. It’s worth a watch.

Description: Judges and food aficionados Prue Leith and Paul Hollywood are back for the next season of this special set of holiday-themed Great British Baking Show episodes. Presenter Matt Lewis returns alongside Tom Allen, a comedian, who is filling in for Noel Fielding while he’s on paternity leave. They welcome the familiar faces returning to the tent for another opportunity to contend to be crowned star baker. This may be the foremost delicious show you watch all month, so don’t miss out!