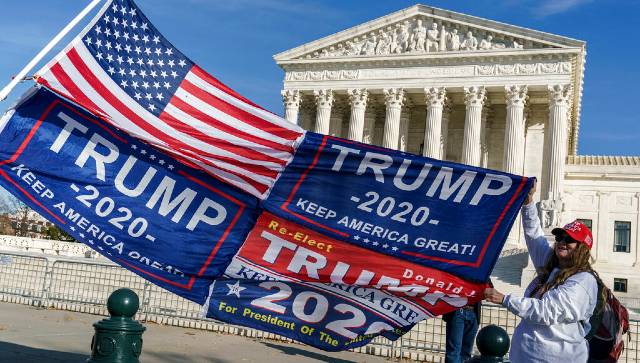 Washington: The Supreme Court on Friday rejected a lawsuit by Texas that had asked the court to throw out the election results in four battleground states that US president Donald Trump lost in November, ending any prospect that a brazen attempt to use the courts to reverse his defeat at the polls would succeed.

The court, in a brief unsigned order, said Texas lacked standing to pursue the case, saying it “has not demonstrated a judicially cognisable interest in the manner in which another state conducts its elections”.

The order, coupled with another one Tuesday turning away a similar request from Pennsylvania Republicans, signaled that a conservative court with three justices appointed by Trump refused to be drawn into the extraordinary effort by the president and many prominent members of his party to deny his Democratic opponent, former Vice President Joe Biden, his victory.

It was the latest and most significant setback for Trump in a litigation campaign that was rejected by courts at every turn.

Texas’ lawsuit, filed directly in the Supreme Court, challenged election procedures in four states: Georgia, Michigan, Pennsylvania and Wisconsin. It asked the court to bar those states from casting their electoral votes for Biden and to shift the selection of electors to the states’ legislatures. That would have required the justices to throw out millions of votes.

Trump has said he expected to prevail in the Supreme Court, after rushing the confirmation of Justice Amy Coney Barrett in October in part in the hope that she would vote in Trump’s favor in election disputes.

“I think this will end up in the Supreme Court,” Trump said of the election a few days after Justice Ruth Bader Ginsburg’s death in September. “And I think it’s very important that we have nine justices.”

He was right that an election dispute would end up in the Supreme Court. But he was quite wrong to think the court, even after he appointed a third of its members, would do his bidding. And with the Electoral College set to meet Monday, Trump’s efforts to change the outcome of the election will soon be at an end.

Trump’s campaign did not immediately issue a statement. In an appearance on the conservative network Newsmax soon after the decision was announced, Rudy Giuliani, Trump’s personal lawyer, said that the campaign’s legal effort would continue, insisting that his team had originally planned for “four or five separate cases”.”

“We’re not finished, believe me,” he said with a laugh at the end of the interview.

The president, who at a White House Hanukkah party earlier in the week eagerly mentioned the pending court case in his remarks, was scheduled to attend another holiday party around the time the ruling came down. But around 8.30 pm (local time), guests were informed that Trump would not be coming down from the residence to speak.

Trump weighed in later on Twitter. “The Supreme Court really let us down,” he said. “No Wisdom, No Courage!”

Friday’s order was not quite unanimous. Justice Samuel Alito, joined by Justice Clarence Thomas, issued a brief statement on a technical point. But it was nonetheless a comprehensive rebuke to Trump and his allies. It was plain that the justices had no patience for Texas’ attempt to enlist the court in an effort to tell other states how to run their elections.

The majority ruled that Texas could not file its lawsuit at all. “The state of Texas’ motion for leave to file a bill of complaint is denied for lack of standing,” the court’s order said.

Alito, taking a slightly different approach, wrote that the court was not free immediately to shut down lawsuits filed by states directly in the court. “In my view,” he wrote, “we do not have discretion to deny the filing of a bill of complaint in a case that falls within our original jurisdiction.”

But that was as far as those two justices were willing to go. “I would therefore grant the motion to file the bill of complaint but would not grant other relief,” Alito wrote, “and I express no view on any other issue.”

Some of Trump’s advisers had anticipated the court would give the president and the Republican attorneys general something that could be characterised as supportive, in the form of a dissent or a lengthy commentary. Instead, there was simply the brief statement from the two justices.

Mike Gwin, a spokesman for the Biden campaign, said the Supreme Court had “decisively and speedily rejected the latest of Donald Trump and his allies’ attacks on the democratic process.”

“President-elect Biden’s clear and commanding victory will be ratified by the Electoral College on Monday, and he will be sworn in on 20 January,” Gwin said.

Despite the court ruling, Trump’s campaign plans to continue describing the election outcome as illegitimate. On Friday night, it announced that it would be running ads on YouTube, which has started accepting political ads again after a moratorium, making that very case.

In the Texas case, the Supreme Court received more than a dozen friend-of-the-court briefs and motions seeking to intervene, from Trump, from coalitions of liberal and conservative states, from politicians and from scholars.

Among them was a brief filed by more than 100 House Republicans who fell in line to claim that the general election — the same one in which most of them were reelected — had been “riddled with an unprecedented number of serious allegations of fraud and irregularities”. More than a dozen Republican state attorneys general expressed similar support Wednesday.

Legal experts almost universally dismissed Texas’ suit as an unbecoming stunt. In invoking the Supreme Court’s “original jurisdiction,” Texas asked the justices to act as a trial court to settle a dispute between states, a procedure theoretically possible under the Constitution but employed sparingly, typically in cases concerning water rights or boundary disputes.

In a series of briefs filed Thursday, the four states that Texas sought to sue condemned the effort. “The court should not abide this seditious abuse of the judicial process, and should send a clear and unmistakable signal that such abuse must never be replicated,” a brief for Pennsylvania said.

On Friday morning, Texas’ attorney general, Ken Paxton, responded with his own brief. “Whatever Pennsylvania’s definition of sedition,” he wrote, “moving this court to cure grave threats to Texas’ right of suffrage in the Senate and its citizens’ rights of suffrage in presidential elections upholds the Constitution, which is the very opposite of sedition.”

Claims that the election was tainted by widespread fraud have been debunked by Trump’s own attorney general, William Barr, who said this month that the Justice Department had uncovered no voting fraud “on a scale that could have effected a different outcome in the election.”

Some 20 states led by Democrats, in a brief supporting the four battleground states, urged the Supreme Court “to reject Texas’ last-minute attempt to throw out the results of an election decided by the people and securely overseen and certified by its sister states.”

Georgia, which Biden won by less than 12,000 votes out of nearly 5 million cast, said in its brief that it had handled its election with integrity and care.

“This election cycle,” the brief said, “Georgia did what the Constitution empowered it to do: it implemented processes for the election, administered the election in the face of logistical challenges brought on by COVID-19

Starting even before Election Day, Trump and his Republican allies have filed nearly five dozen challenges to the handling, casting and counting of votes in courts in at least eight different states.

They generally lost those cases, often drawing blistering rebukes from the judges who heard them. Along the way Trump has not come close to overturning the election results in a single state, let alone the minimum of three he would need to seize victory from Biden.

crisis. In Texas, for instance, Republicans pursued a failed effort in federal court to stop drive-thru voting in Harris County, home to Houston. A similar move was made in Pennsylvania to stop the state from accepting mail-in ballots received after Election Day.

Trump and his allies switched tactics after the election, filing a barrage of suits in Nevada, Arizona, Pennsylvania, Michigan, Wisconsin, Minnesota and Georgia claiming that all manner of fraud had compromised the vote results.

They made accusations that truckloads of illegal ballots were brought in under cover of darkness to a convention center in Detroit; that poll workers in Atlanta were given suitcases full of fake ballots for Biden; that Iran and China, working with local elections officials, had hacked into and manipulated algorithms in voting machines.

While some of these claims were supported by sworn statements from witnesses, judge after judge in case after case ruled that the evidence was not persuasive, credible or anywhere near enough to give Trump the extraordinary relief he requested: a judicial order overturning the results of an election.

What is left is a judicial mopping-up exercise. Several suits that the president and his supporters have lost in lower courts are now on appeal, in both the state and federal systems, but the appellate process is quickly running up against a crucial deadline Monday when the Electoral College meets and Biden is expected to prevail in the voting, all but sealing the results of the election.