Home Anime 86 Anime: The next Attack on Titan 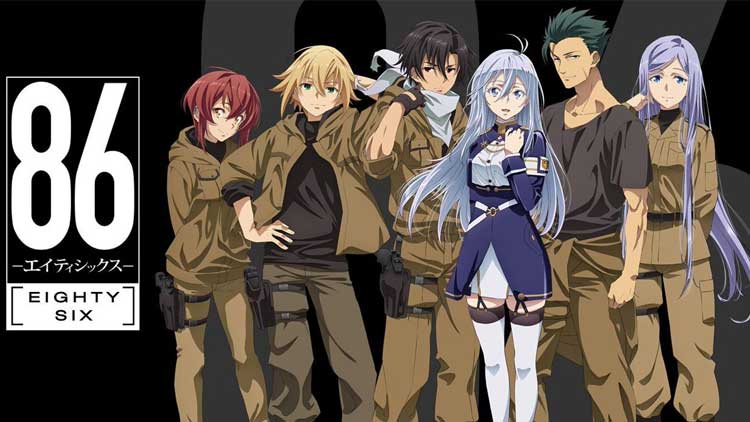 86 is an anime series based on the light novel of the same title written by Asato Asato, having 10 volumes to date starting from February 10, 2017. The anime adaptation of the light novel began airing on April 11, 2021, till June 27, 2021, further season 2 of the series is also confirmed to release in Fall 2021.

86 itself has a wonderful story but with the anime adaptation, we were able to see as to why it could be the next big thing after Attack on Titan ends.

The story of 86 begins with the war between two nations, The Empire of Giad and the Republic of San Magnolia. The empire in the war began using autonomous mech aka Legions hence the republic too developed their own autonomous mech for the war. The republic claims to its citizens that the war is going in their favor and has not suffered even a single casualty till date.

Unfortunately, that is all but mere propaganda where the 85 districts (Alba community) of the republic live in peace, the 86th district, of a different race, is forced to fight by piloting the so called autonomous machines on the battlefield.

Major Vladilena “Lena” Mileze, an Alba but also an 86 sympathizer and activist tries to get equal rights for the people of 86. She is assigned the Spearhead Squadron,  a veteran unit whose squad leader, Shinei Nouzen aka “The Undertaker”, is known to have survived many battles and carries on the name of his comrades who have died in the battlefield. Spearhead squadron is known much for its notoriety among the military where every previous handler is said to have gone insane or committed suicide.

Now it is up to Major Lena on how will she interact with the Spearhead squadron, and aid them in getting justice and rights meanwhile people of the 86 continue to fight on the frontlines with little to no chance to survive.

The main aspect when someone watches anime, apart from the story, is how well it is presented. And 86 does a phenomenal job of presenting Major Lena’s and Shin’s story. The animation and pace of the story is already enough to get viewers hooked into the anime but it takes further with Hiroyuki Sawano providing the music for this anime.

Throughout the anime, there is a certain mystery environment build up regarding the war which is like the war against the titans in attack on titan. The entire war is not as it seems, there are some secrets hidden behind it.

Further, the 86th division is like a scouting regiment in an attack on titan where they are the ones fighting on the frontlines while the rest of the 85 division could be compared to military police or garrison regiment of Attack on Titan.

The animation work done on both of these anime truly does justice to the story but the base artwork of attack on titan is a lot different compared to 86. And music and soundtrack never seem to disappoint, since Hiroyuki Sawano has worked on both the titles.

Should you watch 86 after watching Attack on Titan?

Yes, you should but it is not a guarantee that if you love Attack on Titan, you are sure to find this anime just as good. Attack on Titan has been going on for years and is now finally about to reach its conclusion. The story build up over the years and mysteries slowly opening up with the main characters struggling has created a lot of hype meanwhile 86 has just started its story with season 1 and season 2 yet to come.

The two anime have similarities but also differences in the type of environment the story is build upon. But 86 is definitely worth a try for Attack on Titan fans.

Thanks for the update